Does Size Matter? was the question posed by the title of Assistant Shadow Treasurer Andrew Leigh's talk to the Lowy Institute on Thursday 13th of March. The answer arrived at at the end of his talk was that the quality of people was more important than the quantity. The talk was billed as giving an economic perspective on the population debate and this is exactly what the audience got. Absent were inconvenient scientific perspectives like ecological footprint, climate change, water and energy security. 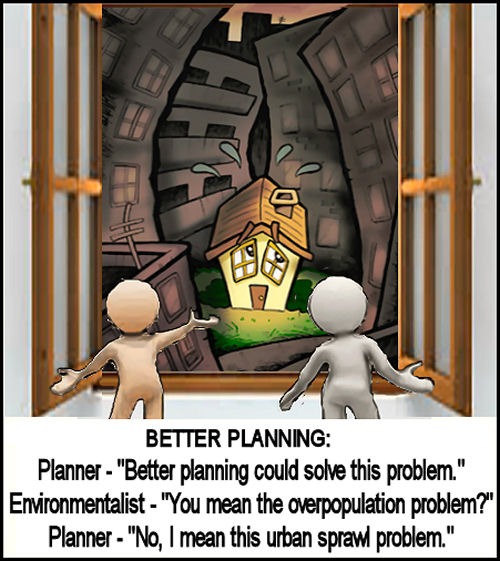 This was a talk high on optimism that technology can solve all of our problems and that more of the right kind of immigrants will give us a better chance of developing that technology.

Malthus also came in for a serve but you have to wonder how intelligent people can be so quick to ridicule Malthus when the UN estimates that two billion people cannot get adequate food.

The subject of infrastructure overload was mentioned but again Mr Leigh's optimism dismissed this as a mere failure to adequately plan for the future rather than laying the blame on high population growth.

The institute's namesake Frank Lowy would have given smiling approval to the thrust of this talk. Immigrants have a greater entrepreneurial spirit and benefit the Australian economy in numerous ways we were told.

In the end the idea that numbers were not important in the population debate did not ring true. Mr Leigh lives in Canberra which is the size of Australia's annual growth. You have to hope that when he drives around the city he may come to the realisation that the reason we cannot build this amount of infrastructure every year is not because of planning but because it's just a physical impossibility.

Perhaps this would be a little optimistic, however.

Kris Spike is the Vice President of the Sustainable Population Party

Last night there was the Melbourne conversation night at Federation Square on the Future of Melbourne with Lord Mayor Robert Doyle on the panel as well as Rob McGauran (well known to a lot of us from VCAT). Robert Doyle talked about how wonderful Melbourne is and how it is going to get bigger and outstrip Sydney and had to stop going out but must build up to hold more people and that was good as it made a place more active and alive and it was far cheaper to upgrade infrastructure than put in new etc etc. He said he was talking about this to Ros Hanson too. McGauran talked among other things about how we needed to get denser as we were increasing in numbers. At question time Mary Drost challenged Doyle to debate Kelvin Thomson on the rate of increase of population. Doyle said he would because he does not agree with Thomson. Drost asked, when and where? In conversation later, according to Drost, Mr Doyle said that Kelvin Thomson would need to agree to the project and that it would need to be organised by Planning Backlash. Mary Drost suggested that the venue should be Melbourne Town Hall. Mr Doyle invited her to call him and talk with him about this.

Doyle says we wouldn't want Melbourne to return to the 70s

Doyle asserted on ABC radio this week that none of us would want to return to Melbourne of the 1970s with only 2 million people. He then went on to attribute Melbourne's contemporary "vibrancy" to its higher population. It was really just a silly muddled rave. He did not explain what was so unpleasant about 1970s Melbourne, nor did he separate positive changes that would have occurred anyway with or without population growth.If he has any intelligence, he must have put it on automatic pilot for his interview with Jon Faine. For a topic as serious as Melbourne's population growth, he really owed it to the radio audience to give better reasons to be in favour of an ever growing population and creating high density urban living. Doyle's concern for market gardens impacted by urban sprawl (in an article yesterday) is reasonable but about 10 years behind the rest of us and just seems a justification for hyper densification.

Melbourne of the 70s was great!

Melbourne in the 1970s was something to aspire to! We had very affordable housing, and many people even had holiday houses, high living standards, roads that weren't congested, education was available at a minimum cost, and there was room to move. Life was simple and we had high rates of employment. Food was cheap, and we didn't have the "growth corridors" causing high rates of crime, and social disquiet. We used to have the Gas and Fuel corporation, SECV providing cheap and reliable power, the Board of Works, and our water supplies weren't expensive as they are today. Our public services provided training, apprenticeships, and jobs. There were no "skills shortages", or massive public debt. We had our own traditional music and dance venues, and folk and rock music was thriving. The "reason" for justifying our present rate of population growth is because it's for the business elite, and to drive the property development industries - both powerful lobby groups. It's not in our interest, the public, and Doyle knows this!

"Immigrants have a greater entrepreneurial spirit and benefit the Australian economy in numerous ways we were told". It seems that there is evidence of Lowy's low self esteem, and cultural cringe that Australia is inferior, and home-grown talent is of lower quality than what's from overseas. Unemployment is generally higher amongst immigrants. Fresh data from the Australian Bureau of Statistics shows people born in non-English-speaking countries have a much higher unemployment rate than the standard rate. Migrants face a range of barriers that people born in Australia don't, including language difficulties, unrecognised qualifications, unfamiliar workplaces and job application processes and a lack of networks and contacts. Net migration into Australia is around record levels. In the year to January, a net 380,000 people entered the country on a long term basis. This is well above the long term average of around 150,000. But since 2004, the average has been closer to 300,000 per annum. This stimulates the economy in the short term, as migrants settle and buy housing, consumer goods and pay taxes. However, the long term costs are ignored - in the debt of infrastructure, public service overload and congestion. This means mega-dollar spending to fix the mess, and by then there's a new government who predictably blames the previous government for financial mis-management! "Research shows there are high levels of under and un-employment amongst CALD communities particularly new migrants," Greens Mr Bandt said. "If you have skills but come to Australia from a non-english speaking country you are twice as likely to end up in a low skilled job as someone from an English speaking background." Greens Adam Bandt MP, will introduce a private members' bill to require the public service to double its employment of people with disabilities and people from non-english speaking backgrounds over the next five years. Migrants from non-English-speaking backgrounds are grouped with those with disabilities? It seems that the Greens will continue in their denial of high immigration rates as a burden to Australia, at all costs! According to a report prepared for the Department of Immigration in 2011, refugees who have settled in Australia have a higher incidence of business ownership than other migrant groups – and are more likely to be self-employed than people born here. However, refugees only make up a small proportion of our immigration intake!

LORD Mayor Robert Doyle has slammed the destruction of market gardens on the city fringe to make way for housing. Cr Doyle said that places like Clyde in the outer southeast were prime food-growing areas, but were threatened by urban sprawl. With Australia having only 6% of our land arable, for continual food production, and 3% of it in Victoria, it's high time someone spoke up about our aggressive housing and property industry in Victoria. With other economic activities struggling, this industry is thriving due to our immigration-driven high rates of population growth! The political control of population can't be ignored forever. What's incongruent is Doyle's irrational lack of logic. Cr Doyle urged governments to stop building new suburbs where there were no jobs, no public transport and a lack of other infrastructure and services. So, we wants ongoing high rates of population growth, but more people crammed together in a rat-race of congested housing and roads! “I believe in a big Melbourne, but I believe in a big smart Melbourne,” he told a Future Melbourne Network event this week. So, "big" and "smart" are synonymous, and not a contradiction for Doyle! There's nothing "smart" about ecological overshoot, or population overload. People should have more intelligence that bacteria, happily eating away at the substrate in their petri dish, reproducing with impunity, until they reach the limits of their tiny universe- the edges of the dish! While humans have more ingenuity, intelligence and creativity than mindless bacteria, there are always natural constraints to any growth. How does Doyle expect to "grow" and be a "big" population without expanding over our salad bowls? The only solution would be to force people to live in ever-climbing towers, and cram together in high rise apartments like those in Hong Kong and may parts of the world. Migrants come here for a "better life", with high standards of housing, room to move, job opportunities and better living standards and opportunities for their kids. Emulating a high rise future is not the Great Australian Dream! Cr Doyle said that Melburnians had to get used to higher density living in existing suburbs because of the exorbitant cost of creating new communities in fringe areas. What we "get used to" should be a choice, not imposed upon the public because of the megalomaniac growth policies of the elite, who themselves will reside in leafy residential streets, pampered by privileges. At least we have the new organisation, "Victoria First", to address the spin and illogical statements coming out of the mouth of our growth-obsessed administrators.

Doyle just says the words which he needs to say to keep the important people happy, thats it. It matters not whether they make sense, words are all that matters, and he says the right words at the right time. Thats true with most things now. Melbourne can't pull off high density living. I'm coming to the realisation that our growth mania is largely due to lack of leadership talent and sense of inferiority and insecurity. Melbournians (and likely Sydneyites too) have a nagging sense of irrelevance, and are trying to prove themselves "on the world stage" the only means we know how, mass, pointless and very messy growth. Doyle and cohorts simply have nothing at all, and submit to growth in a vain attempt to make Melbourne relevant.