Plans of the Victorian Government and Minister for Agriculture Peter Walsh to use the carcasses of Kangaroos shot under an Authority To Control Wildlife (ATCW) permit are very deceptive.

When an ATCW is issued it will state the number of animals allowed to be shot but there is no paperwork to support what the actual number shot was. It could have been more or less than the permit allowed. It is never checked. The number of Kangaroos claimed to be shot under an ATCW annually has been stated by the Victorian Government as 30,000 – 70,000. 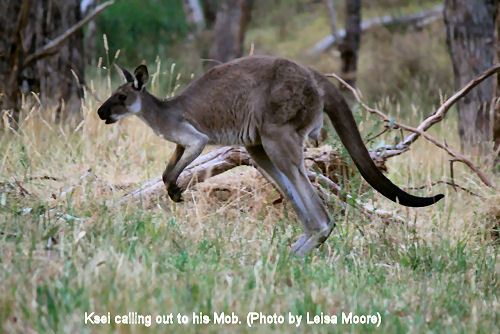 These figures have obviously been plucked out of the air and inflated to justify the Governments proposed two year trial.

Prior to this trial it was generally accepted that the annual number of Kangaroos shot under permit was around 30,000 which coincidently was the number allowed during the time Victoria contributed to the commercial Kangaroo trade. Further more, there has never been a comprehensive count of Kangaroos in Victoria because the terrain makes it too difficult. On what statistics is this Government basing their figures and their assumption that Victoria is able to sustain the slaughter of up to 70,000 Kangaroos each year?

So what’s this really all about?

It’s about a Government which doesn’t have the intestinal fortitude to stand up to the pressure of farmers.
A farmer, like any other Australian citizen is doing a worthwhile job but they are not sacred, let’s be frank about this, they are no more valuable to this country than any other Australian. It’s their votes which are valuable and the Coalition Party panders to their every need regardless of, in this case, the welfare and sustainability of our wildlife.

Farmers may know a lot about sheep, cattle, and crops but many they know nothing about the population dynamics and the ecology of Kangaroos. To such farmers Kangaroos are not to be tolerated and their reasoning goes something like this ‘they take the grass out of the mouths of our stock, trample our crops and destroy our fences, they foul our pastures and water and breed like rabbits’.

One would think that all farmers could have learnt a thing or two about these beautiful animals since 1788 but NO, for an important number, ignorance and red-neck attitude have stood the test of time.

It’s also about greedy Councils who see an opportunity to add to their coffers and was first touted by the South Grampians Shire in 2008 and supported then by our present Premier Dennis Napthine. http://www.spec.com.au/blog/2008/06/05/roo-plantshire-wants-kangaroo-meat-processing-plant/

On the 22 February 2012 the Victorian Premier, Mr Baillieu, issued a General Order – Administration of Acts in which he gave a huge portion of the Wildlife Act 1975 and the Flora and Fauna Act 1988 to Peter Walsh, effectively taking the control of these Acts out of the hands of the Environment Minister Peter Ryan.

As Minister for Agriculture and Food Security, Peter Walsh has portfolios which include administration for the Meat Industries Act 1993 and the Prevention of Cruelty to Animals Act 1986. Added to this he has now been given responsibility for pertinent sections of the Wildlife Act and the FFG Act which place him in the perfect situation to introduce this trial. One could justifiably ask what role a Minister for Agriculture can have in the Wildlife Act and the Flora and Fauna Guarantee Act. The answer is an essential role to make permits to cull more available. Peter Walsh is a farmer and scruples about Kangaroos seem to be a non issue.

“And thus I clothe my naked villainy with odd old ends stol'n out of holy writ; and seem a saint, when most I play the devil.” William Shakespeare – Richard III

The annual cost to Victorians for the issue of ATCW permits is around one million dollars; this is because the applicants are not required to pay a fee.

There are more worthwhile ways to put our tax dollars to work, such as research into non lethal methods of controlling wildlife, information to landholders about appropriate fencing and factual information about just how much grass and water a Kangaroo consumes in comparison to sheep and cattle, just to name a few.

Logic says that if landholders were required to pay for their permits the number issued would be drastically reduced.
The linked to ”Kangaroo Pet Food Trial, information for shooters document has been issued by DEPI and like the ATCW guidelines is ambiguous to say the least.

The Danger to Pets of eating kangaroo meat

No consideration has been given in this trial to the dangers of feeding pets with Kangaroo meat.
Both processed manufactured pet food and raw 'pet meat' products can contain preservatives. Most commonly used is Sulphur Dioxide, which leaches out Thiamine or B1 from the meat. To counteract this, more thiamine is added to the processing and labeled ‘added vitamins’, but this doesn’t stop the depletion of Thiamine, which will continue. (VP Studdert and RH Labuc Veterinary Clinical Centre, University of Melbourne, Werribee 1991.)

The safety issues relating to sulphur dioxide and sodium and potassium sulphite preservatives are that these can cause thiamine deficiency, which causes severe neurological symptoms and can be fatal.

Some time ago the writer contacted Dr Yasmine Sultanabad, Senior Research Fellow Queensland Alliance for Agriculture and Food Innovation, University of Queensland, with this question:

“Sulphur dioxide is added to Kangaroo meat and then vitamin B1 is added to counteract the effect of it's depletion due to the added sulphur dioxide. Can you tell me if the sulphur dioxide continues depleting the B1 which has been added or does it only deplete the B1 found naturally in meat? If the B1 depletion continues could this be the reason for Thiamine deficiency found in cats and dogs eating Kangaroo pet minces?”

This is her reply:

“Thank you for your e-mail and your interest in our research work. You have asked a very good question. Yes metabisulphite (sulphur dioxide is generated subsequently) is added to kangaroo meat and then supplemented with thiamine (vitamin B1) to counteract the depletion of thiamine. Yes the sulphur dioxide continues depleting the B1 which is found naturally in the meat and also which has been added as a supplement. It is due to this reason that thiamine deficiency occurs. I am also attaching a research paper which supports this information.

Dr Denis Napthine, who holds a Masters Degree in veterinary science, has seemingly chosen to ignore the danger to pets. Perhaps getting ahead in the game of politics matters more than all his years of university.

Does this Victorian Government think it can pull the wool over the eyes of every Victorian?

No other symbol of Australia is so maligned and hated

Thank you Cienwen for a very informed and excellent article. There is a clear conflict of interests with the Minister for Agriculture also administering the Wildlife Act. It's a case of the prisoner, or exploited, being supervised by the same person, or group, that's also their advocate and defence! How can the welfare, and the protection of wildlife from cruelty and inhalation, realistically and objectively be under the same department as the one in charge of giving killing permits? The permit holder is likely not to be a professional or accurate shooter, and there are some horrific examples of jaws being blown off, and the animals being left to die in agony! What about joeys? We have dedicated wildlife carers spending hours trying to heal and nurture wounded kangaroos. Where can they be released to be safe? The same departments shouldn't be promoting the killing of kangaroos, and dispensing with ATCWs, and be responsible for the well-being. Previously, there were 30,000 carcasses of kangaroos left to rot, and going to "waste", in Victoria. Now, the number is up to 70,000! Once there is monetary gain, the number of shootings will increase, and there will be orders for pet food to fill! Kangaroos are seen as a "free" resource, and there for the pickings. What other native animal is so maligned and hated as our own symbols of Australia, the kangaroo? Please sign the petition| Stop the killing of kangaroos for pet food in Victoria, Australia