The World is Not Hostile

Hobbes’ declaration that life is “Nasty, brutish and short” is often quoted today  (although , completely out of context, it was not unconditionally so) and modern economists may decry the “scarcity of resources”, but this is only one view of the world, and one that has been formed relatively recently in Western history – perhaps it is no coincidence that this attitude developed along with philosophies of self interest and social theories of “survival of the fittest” (this is no criticism of Darwin’s theories, just their misapplication to human affairs, as promoted by Herbert Spencer).

However, there is another view of the world. That is of one of abundance and bounty. The fruit tree bears far more than is needed to reproduce itself. There is almost nothing we cannot eat: many plants, the flesh of animals (also abundant in natural environments), their milk, their eggs, the sap of trees like maples, the honey of bees, the fish, crustaceans, frogs and seaweeds of the rivers and oceans, the mushrooms and fungi of the forest. It seems there is no reason for anyone to go hungry. Even less so with a little tender cultivation. In fact, it seems that mostly what is needed to prevent hunger is access to land, knowledge of plants and animals, some basic hunter gatherer skills, and protection of the natural environment.

However, we believe to improve on nature with our elaborate artificial constructions.  But we what we bring to the world is mostly decay.  Everything we (people) make decays, but in nature there is no decay, just transformation. The seed of grain we plant is, for all intents and purposes, eternal.   Seeds reproduce themselves, not only infinitely in abundance, but infinitely through time.  True, there may be slight changes by breeding and other forces, but again this is more transformation than destruction.  Carrots may be larger and sweeter than they once were, but they are still carrots. Species may become extinct through external forces, but the idea that they – out of themselves – would decay and cease to reproduce is preposterous. Yet, what do we develop? Nothing less than something abhorred by nature: sterile seeds, that cannot and do not reproduce (although apparently not yet in commercial food crops).

What about human relations? Let us imagine what these could be like, in their best ideal form. What about close communities where people care for each other, share with each other and help each other out, whether incapable of providing for oneself or just plain lazy (primitive societies often provided even for these people, without question). What need then of having many children out of fear of not being cared for in your old age? Certainly people will still do selfish and stupid things, but with compassion, tolerance and understanding such problems should be easily corrected.

But what do we have instead? A system whereby people do not look after each other directly, others are paid professionally to do this (and often they are the lowest paid, a reflection of society’s values?). Instead we are freed of concern for our fellow man, beyond our own immediate families, as our fellow man is free from us. We are all encouraged to pursue our own self interest, to take gains and advantages wherever we can get them, and to consider such gains exclusively your own. Is it no wonder that nature has thus been divided up, owned in effect by a few through their agents – their corporations (the most impersonal construct imaginable) - and this fiercely defended against the claims of those who have less or nothing? What sort of a ‘society’ has this resulted in anyway? A world where one half has too much food and the other half starves. Can it really be called ‘human’? Or would ‘inhuman’ be more apt?

Do our sporting endeavours reflect our social attitudes? Now I am not entirely against team sports, but perhaps there are some elements of this that need consideration. A friendly game seems to do no harm, particularly where the teams are somewhat arbitrarily composed, and the game is played mostly for the pleasure of playing. But where one side goes out with a determination not so much to enjoy the challenges of the game, but focused on the defeat of another team – even more so when their career and salary depend on success - then this is perhaps a reflection of deeper and darker social constructs. Particularly when you have vast numbers of followers, who are not players, but  gather largely based around a kind of tribalism, perhaps again as a form of protection in a hostile world, through some sense of  a shared group identity?  But perhaps also deriving some pleasure from the power and prowess demonstrated by players over others?  Or perhaps to share in their glory? Team sports on the scale we have today seem to be a recent phenomenon in Western culture, coinciding with industrialism and its ideals.

Yet, there are two sides to sport. On one side is team sports, where one team vanquishes another. The other side to sport – a side that featured prominently in ancient Greece -  is individual sports, such as discus, which were perhaps more about individuals seeking perfection. In such a situation individualism is appropriate as such perfection need not come at the expense of another, but rather mastery of oneself (self discipline) and one’s body.  Such individualism restricts nobody in how perfect they can become, and all who wish to participate can achieve a high level of perfection.

In fact, this may give a hint as to where society has really gone wrong. Rather than focussing people on the perfection of themselves – as caring individuals, who do not act selfishly and who share and care for others - our society has gone the other way. People are encouraged to give in to their most selfish and gluttonish tendencies, to be the greatest, to not put others before themselves, but themselves before others.  This is a far easier path to walk, as it requires no self-discipline. But as only few can succeed at this game of ‘who is greatest’, the vast majority of the people will be disappointed, and possibly depressed. Others, who suspect deep down that the game is not worth playing, may end up not only entirely confused by the behaviours around them, but also misunderstood.
It seems Hobbes also understood this inclination as he declared:

“So that in the nature of man, we find three principal causes of quarrel. First, competition; secondly, diffidence; thirdly, glory.”

But is it really the nature of man to be so? Or can we be - or at least aspire to be - better than this?

According to some early pioneers Carrum was a paradise - William Bruton's memories were:
From Carrum Cowboys:

"When I first visited Carrum, there was no ti-tree (or tea-tree) on the foreshore from Mordialloc to Kananook Creek. There was however a small patch of ti-tree about two miles from Mordialloc, called the scrub, which had not grown to the height , or spread as it has since done, but there were plenty of the east side of the road. The foreshore was a growth of honeysuckle ferns and wild currants, and when the trees were flowering, a large number of birds were seen, Magpies and crows preferred the other side of the swamp. 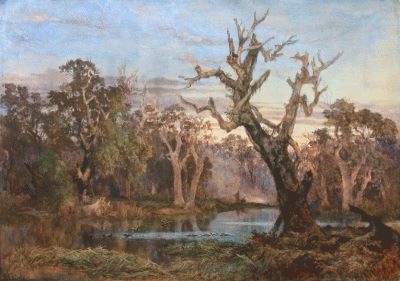 The call of the Kookaburra was heard everywhere and amongst the trees wattle birds, leatherheads,woodpecker, thrushes, kingfisher, robins and many different kinds of parrots, and as we camped near the swamp ti-tree when - Oh! wild turkeys - they know the human beings, and are up and off quickly. But what are those tall things over yonder? a flock of native companions. Rare as they are, they are still birds, but they are far more conceited than any other bird.

Here the gum trees lay prone where they have lain for hundreds of years, and others in the full glory of life send their spreading limbs and luxuriant foliage out, displaying their pride of life. Here also are the possums in plenty disporting themselves amongst the branches.

And so it seem that the energy of the axeman, the drainer, the builder have turned this heavenly paradise of thousands of years, into a joy somewhat like unto the dog of old, racing with the jam tin, which rascally boys have attached to his tail." [5]