Update, 12 July 2013: The Stalking of Julia Gillard by Kerry-Anne Walsh published by Allen and Unwin has already been reprinted 3 times, such is its public reception! Kindle edition (AU$9.99) also available. See also comment of 30 June by Barry Tucker of the Truth in Media Resource Centre.

Julia Gillard, almost uniquely amongst leaders of either the Labor or Coalition parties, tried to make it possible for the voting public to properly hold to account all candidates contesting the forthcoming Federal elections. That is why the ruling elites, its newsmedia and its glove puppets in the Federal Parliamentary Labor caucus felt threatened by her and removed her from office. (Article was originally published on 28 June 2013.)

Reports of 30 January 2013 of Prime Minister Julia Gillard announcing the election date a full eight and a half months in advance, provide a clue for the motives for the recent coup against her.

Julia Gillard's statements announcing the election so far in advance show, that, almost uniquely amongst leaders from all the major parties in recent decades, Julia Gillard was motivated by a sincere wish to allow proper informed discussion of the policies on offer by the different candidates contesting the federal elections.

The Guardian reported in the article Julia Gillard: Australian election will be held on 14 September of 30 January 2013:

Gillard said the election date allowed for the year to be one "not of fevered campaigning but of cool and reasoned deliberation". She said no surprises about the election date should mean "no excuses", a clear barb at the conservative opposition leader, Tony Abbott, whom she has criticised as announcing "platitudes not policies" and giving few costings for his promises.

Gillard said she had made the announcement to allow all parties to have the chance to properly cost their policies.

"There is now clearly the time and certainty necessary for the people and parties contesting the election to lay out their fully detailed, costed plans for the timely consideration of voters," she added.

Further along, the Prime Minister expanded upon her reasons:

Ms Gillard said by announcing the date so far in advance, the opposition no longer had an excuse not to provide detailed costings ahead of the poll.

"They have two things that an opposition has never had before to enable them to do that," she said.

"One, they've got the benefit of a fixed election date now with several months notice.

"Two, because of what we've done with the Parliamentary Budget Office they've got more resources available to them than an opposition has ever had before in the history of the nation to produce proper costings."

The Australian Greens leader Senator Christine Milne also welcomed the announcement and called upon the Prime Minister and the Opposition Leader, Tony Abbott, to agree henceforth to have fixed three-year terms. Christine continued:

"Wouldn't that be a great thing for the Australian people so we didn't have all the game playing that has gone on in the past?"

Senator Milne was alluding to the established practice of the ruling party in the Federal Parliament using its incumbency to gain unfair advantage over its opponents by being able to suddenly announce election campaigns at a time that gives it the greatest advantage.

As an example, former Prime Minister John Howard was only able to win the election of 1998, thereby gaining what he claimed to be a mandate to subsequently implement his "never ever" Goods and Services Tax (GST) by abusing his position of incumbency. He did this by announcing a phony inquiry into "tax reform". The inquiry was really a vehicle to push his GST into Parliament as Liberal Parliamentarian Paul Zammitt, who resigned from the inquiry committee, complained.

As Howard had planned, the "inquiry" recommended adoption of the GST. He Immediately called an election before Parliament could scrutinise the report and just scraped back into power with a bare majority in the House of Representatives and only a minority in the Senate, having lost the poplar vote 51% to 49%.#fn1">1

John Howard's subsequent election victories of 2001 and 2004 were also helped by his further abuse of incumbency in setting the election date.

Had there been fixed term elections, John Howard almost certainly would have been voted out after his first term.

Julia Gillard has shown, by her actions, integrity not shown by Labor leaders, with the possible exception of Mark Latham, since Gough Whitlam and like-minded people lost control of the Federal Labor Party in the late 1970's.

The Age newspaper's editorial of last Saturday 22 July claimed that only by removing Julia Gillard would a more thorough debate of policy occur - as if the Age did not already have sufficient profile to make that happen should it have wished to do so.

Another justification given by the Labor Caucus and the Age newspaper is that the opinion polls showed that Labor could only win if the former failed Prime minister Kevin Rudd was leader. If this were the case then it is surely evidence that the public has been misinformed by the newsmedia.

Much, but not quite all, of what Julia Gillard gave the Australian public has been lost. There may still be time, for those with access to the Internet, to scrutinise and hold to account candidates from the major parties and minor parties and independent candidates. However, if Kevin Rudd were to give in to Opposition Leader Tony Abbott's demands to hold the election earlier than 14 September, that would be much harder to achieve.

Examples of reporting, misreporting and arm-twisting in the Australian newsmedia 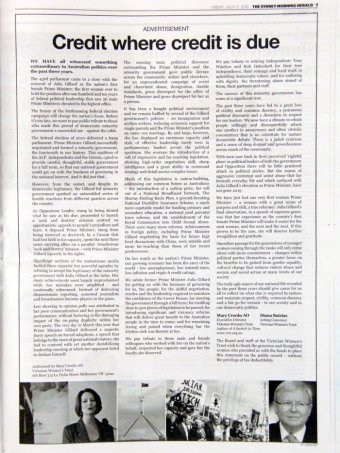 The ABC reported: A women's rights group has accused Prime Minister Kevin Rudd of treachery for his treatment of predecessor Julia Gillard.

The Victorian Women's Trust has placed full-page advertisements in four Australian newspapers praising Ms Gillard's achievements and slamming both Labor and the Liberal parties for their actions over the past three years.

"We just want to put on the public record early in the piece the fact that this was a successful minority government, led by her (Gillard)," Ms Crooks said.

The advertisement also accuses seasoned reporters of becoming players in an aggressive campaign of sexist and chauvinistic abuse.

"I think there's been a hostile media, by and large, over the last three years, which I also argue has given licence to a lot of people across the community to speak very destructively and disrespectfully towards Julia Gillard and the minority government," she said.

The trust says the seams of contempt and sexism should be cause for reflection on what is needed to restore respect and "a fair go" for women.

Gillard not a friend of the most vulnerable women

The Victorian Women's Trust may praise Julia Gillard's achievements, but she wasn't very fair or kind to the most vulnerable of women- single mothers! Gillard’s new policy forced around 100,000 single parents, 90 per cent of whom are women, onto Newstart unemployment payments when their youngest child turns eight. This will slash their weekly income by up to $223 a fortnight, or 12.8 per cent. More than 60,000 will shift to Newstart, with welfare groups estimating they will be between $60 to $100 a week worse off. There are unlikely to be jobs for these women, yet they will be forced to go through the humiliating processes imposed by Centrelink. It assumes that single mothers are all living their chosen lifestyles, when the contrary is most likely. Many women are abandoned, deserted, and victims of divorce. Recipients tend to live in areas where unemployment is high, like Sydney’s western suburbs where employment rates reach 10 per cent. The government claims the policy is an incentive to push single mothers into the workforce. Gillard has tried to defend the decision, arguing: “…it will be better for them [single parents] because they’ll have a job for the rest of their lives, and better for the child to have someone in the household modeling what it’s like to go to work every day.” Thanks to declining manufacturing industries, privatisation, and immigration overload, we are facing rising unemployment. Gillard is still living in another era, when jobs were in plenty, and not facing up the realities of these times. Politicians are increasingly out of touch with the issues facing the public, and are working on pre-formed ideas of another age.