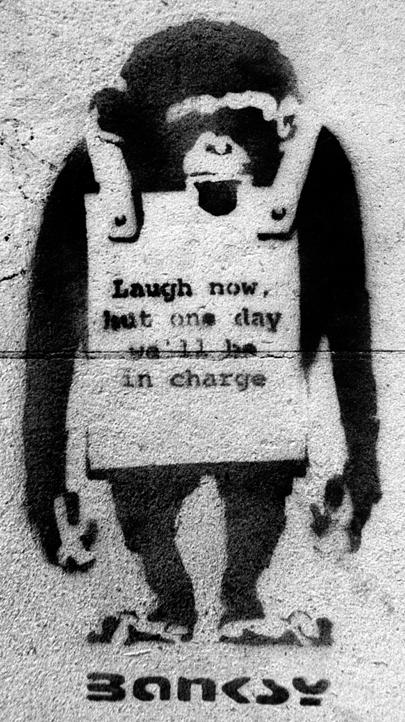 Banksy: Another subject of ridicule on spiked

""There is no box. That is the mind-set we need if civilization is to survive."
Lester Brown 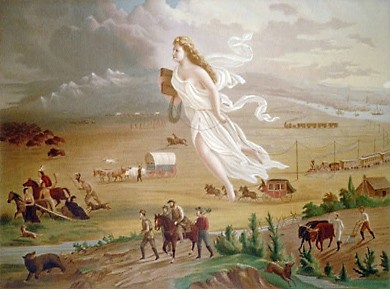 No one has done more or better work than Jay Hanson to acquaint interested
persons with Hubbert's concept of Peak Oil. On his website, dieoff.org {1}, Jay has described Overshoot, Crash, and Dieoff well enough for all of us. This work does not need to be repeated. However, there is another side to Jay:

It seems that, corresponding to egalitarian tastes and authoritarian tastes, there has been a right and left wing of every political movement: Nazis, Communists, and, now, Peakers. Apparently, Mr. Hanson is almost completely self-taught. I cannot find any reference to a university background of any type. Like many such people Jay made money in the computer business and, probably, considers himself a self-made man. Regrettably, some people of that description are given to right-wing tendencies. Presumably, they imagine that, since they “made it”, everyone can make it; and, it’s their own fault if they don’t. Jay belongs to the right wing of the Peak Oil movement whereas I belong to the left wing.

From time to time, Jay has provided a list of background subjects and associated reading material, not for our personal study as he claims, but to mark out territory throughout which he pretends to have complete intellectual mastery. He claims to be willing to answer our questions, but only if we are willing to sit at his feet. Nor does he tolerate dissent {7}. Although the subject matter is science, scientific doubt and fallibility are completely foreign to his nature, which is anything but scientific. Moreover, he has very little math. Thus, he is vulnerable to the most egregious errors in the interpretation of scientific and numerical data from which he has no chance to recover. In the remainder of this note I discuss the inconsistencies in Jay Hanson’s versions of the Sloth Economy and War Socialism.

The Sloth Economy and War Socialism

Both Wayburn and Hanson have observed that market economies are efficient in one respect only. They transfer wealth from the poor to the rich with the minimum effort by the rich at a catastrophic cost to the energy efficiency associated with earning a living by those who serve the rich. In the United States, the market economy itself consumes between 50% and 90% of the total energy budget without producing one single thing we need to live {2}. Thus, both Hanson and Wayburn recognize that the only chance to mitigate the worst effects of Peak Oil is to effect fundamental political change. Wayburn's Natural Economy {3} replaces the market economy with a consumer-planned economy in such a way that the energy budget can be met by Maximum Renewables {4}only, provided that population growth can be checked. Hanson's War Socialism attempts to reduce the energy budget with rationing. This is too little too late, as we shall see, despite the somewhat misleading title War Socialism Is a Step toward a Natural Economy {5}. The following entries to The Dematerialist's Journal will be useful to see the important differences: June 16, 2007. Jay Hanson's War Socialism is a point on the path to the Dematerialist's Natural Economy {6}supplemented by Hanson's Last Stand {7}, which is a slight modification of the journal entry for July 9th, and July 27, 2007. Communism and Some Idle Thoughts on the Excesses of Capitalism {8}, which is a useful rebuttal to opponents of communism and defenders of Marxism.

Thus, Jay Hanson's scientism fails Popper's fallibility criterion and his alternative to the free market is inconsistent with sustainability.

History records that Karl Marx had a fierce disregard for Thomas Malthus and his theory. Blaming the poor for their poverty was just not on for the socialist revolutionary from Trier, Germany. The system---capitalism---was to blame for everything. Dump capitalism, institute socialism, and people will presumably stop bonking.