How a Kangaroo Joey With Serious Injuries was Saved

This amazing story from Professor Garlick:

"We only know a little of the history of this little girl. She is just 2.75 kgs. She was found in a field with eagles hovering over her. Her mother was protecting her from he eagles. She was brought to Rosemary and me by a member of the public at around 11.00pm a week ago last Sunday. We don't know what caused her horrific injuries - a transverse compound fracture of the mid-shaft right tibia, fracture to the base of the tail, wound of 4cms down to the bone on the left tibia. 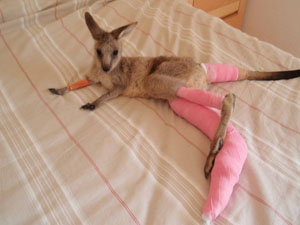 With sedation and pain relief we worked on her with gentle traction for a couple of hours to clean, reduce, align and position the bones, dress and splint the compound fracture site and the entire leg (around 1.5cms reduction needed). The tail fracture was also reduced and went back into position quite easily and then splinted.

The wound was cleaned of maggots, sutured and dressed with wound honey. 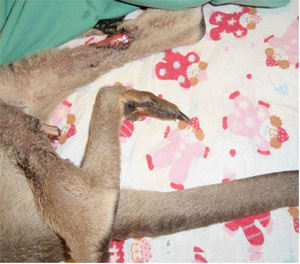 She was also hypoglycemic and needed warming and fluids over about a week to get her thermo regulating again.

She is receiving a range of intravenous antibiotics twice a day.

Initially we held out little hope and in fact the next morning thought she had died, but there was a glimmer of breathing so we continued with the warming and the fluids and gradually she regained her strength.

Within a few days she was not only scoffing down several bottles of milk a day but also eating grass and other hard food.

Veterinary advice was used all the way."

How inspiring. Without the dedication and caring of these wildlife carers and their very talented wildlife vet this joey would have died a terrible death for sure.

Wouldn't it be good if more vets and wildlife groups encouraged this kind of treatment instead of euthanising?

Our wildlife deserves a chance. They are sentient beings after all.

UPDATE - May 15, 2010
Sylvie has a much smaller splint on after the last visit to the vet so she can start to get some exercise. Otherwise she has put on 0.5kg and going very well.

May 23, 2010
The photo below shows Sylvie with the splint on. However she will have a reduced splint in another week or so and should then become more mobile. Will keep you updated so keep checking back! Luckily she has an excellent vet helping her.

After 10 weeks of treatment and recuperation, she is hopping without difficulty. The next phase of her treatment, having been in a splint, is to gradually build up muscle mass and improve ligament flexibility. This will take just a couple of weeks of daily exercise and then she can join the others that have recovered from injury in our small enclosure.

Can you imagine how happy she must feel? What an exquisitely beautiful creature!

Valuable Lesson for other Wildlife Carers
Standard protocol chosen by many wildlife carers for the kind of injuries that Sylvie
sustained is euthanasia. However, after consulting with their specialist wildlife vet about the nature of her injuries and given her size, Steve and Rosemary chose to treat the injury and administer basic first aid to reduce pain by sedation, sterile cleaning of the site, aligning the broken bones and splinting. This was followed up with ongoing veterinarian examination and treatment. Their experience with hundreds of animals in similar situations is given time, pain relief, antibiotics and stress myopathy support, many times the animals will recover.

Having seen the picture of her original injury, some carers aggressively predicted that Sylvie would die within a day or two - or at least within a week - and if she did survive the infection she would collapse the first time she tried to hop. But they were all wrong as Sylvie has now proven.

It can be very difficult breaking the old tradition to euthanise an animal with fractures and it takes enormous courage to go against the tide, but for the sake of the wildlife who are dependent on carers it is important to continually learn from others and not rely on general myth that is not supported by evidence. 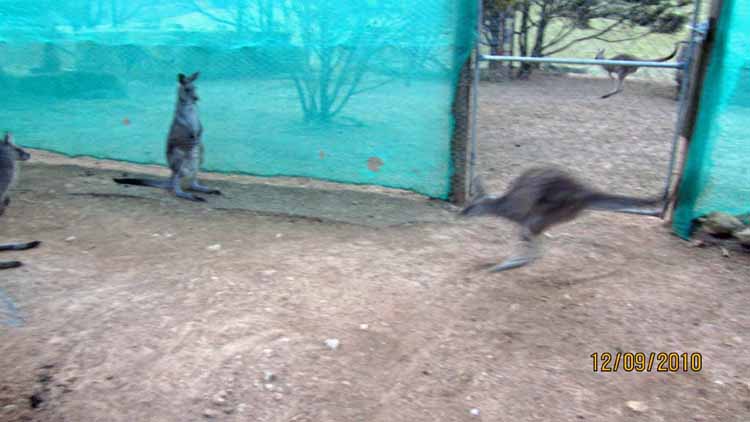 (Five months after coming into care, look at her fly! - in the foreground)

We certainly need more people like yourselves who are prepared to "have a go".Our wildlife desperatly need more RESPECT as it won't be long and we will all have to go to a zoo to view what we haven't killed.

Raoul, without wildlife carers like you, what chance would our wildlife have? Each one you rehab is so blessed ... as are you. Unfortunately we are outnumbered by the number of people who just don't care ..... menkit "It’s embarrassing for Australia that we eat our own wildlife ....I’m here to tell you it’s just not right. Simply do not buy, use or eat kangaroo products” ~ Steve Irwin Sign the most important petition ever created to help kangar

Big ((Hugs)) & many thanks from a Aussie fauna & flora lover in Texas USA - with all the horrific evils going on worldwide, this story sure brightens my spirits- Thanks again for all you care-takers do

Any chance you can put up a recent photo of the joey Menkit? I'm amazed she has come this far after seeing her injuries. Well done Steve and Rosemary Garlick!

It just shows that a kangaroo with a broken leg does not have to be 'humanely put down' at all. They can survive if people would just take the time to look after them, just as we would a child with a broken arm or leg.

well done all you wonderful people ! here in SA we have many in our roo yard who have had similar injuries. they and your girl atre living proof that they do not have to die. be aware though that a joey like this in inexperienced hands could/ would suffer horribly. just 3 weeks ago a local vet rang and said he had a pinkie for me or d.. or he would put her down. little ebony is well on her way to being healed and went to a doctor/ friend/ carer just last night. its a fantastic thing to be able to help them live a good life instead of simply being euthed.

What a wonderful story, the work put into saving our wildlife is the most worthwhile of all, the look in any animals eye of trust is one that words cannot tell, to have these special animals returned to their own environment is what it is all about, there are animals with such a will for survival that just need abit of help along the way, we have destroyed most of their environment and they need all the help they can get to live out their lives .,

I feel so honoured Steve and Rosemary named this little girl after me. Everyday I think of her and every day I think of the love and care given by two such good human beings. Wel done. I hope later in the year to be able to visit little Sylvie, if I am lucky I might receive a kangaroo hug.