Can Injured Adult Kangaroos be Successfully Rehabilitated and Released?

Wildlife carers always advocate 'euthanasia' for adult kangaroos on the grounds that they cannot be rehabilitated. Since kangaroos suffer and die from stress myopathy, containing them in an area and exposing them to humans (arch enemy of kangaroos) is cruel and prolongs their suffering - it is argued.

Meet two wildlife carers who disagree and whose experience is contrary to the generally accepted opinion.

In June 2010, Steve presented a paper to the National Wildlife Rehabilitation conference in Adelaide in which he documented a 97% relocation success rate, with relocated kangaroos (including adults) being monitored over a 24 month period.

Rosemary and Steve produced this paper in response to the well known 2008 herding and brutal slaughter of at least 514 kangaroos in Belconnen, Canberra. The A.C.T. government argued that these kangaroos could not be relocated because up to 40% may die in the process. Apparently they preferred a 100% fatality rate to a RSPCA estimated 40% fatality rate.

The Garlicks' paper demonstrated that, with thorough planning and control, orphaned and wild large Eastern Grey Kangaroos can be successfully translocated with a high success rate and there is indeed no valid excuse to 'cull' healthy kangaroos who are deemed to be in need of moving.

This is what he had to say about a recent case of an 20 year old kangaroo named Thelma:- 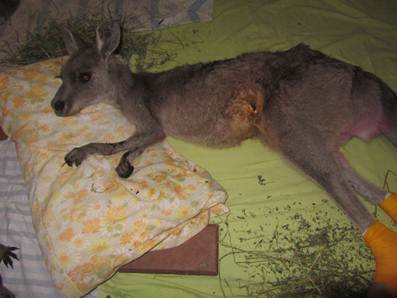 Thelma soon after she arrived at Steve's

"We are always rehabilitating severely injured adults. That’s what we mostly do because they are the ones that mostly are injured.

"On a 37 degree day in late December we rescued old Thelma. We could smell her 40m metres away she was so debilitated and infected. Just skin and bones. Her pouch was torn to pieces and completely infested with maggots as was her mouth. She couldn’t move and probably would have died within hours of us arriving. 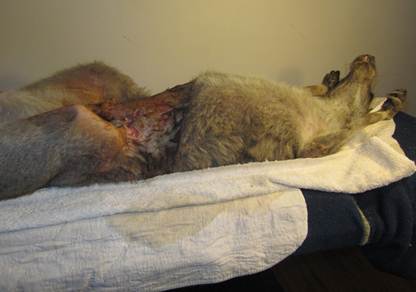 Thelma sedated on the treatment table 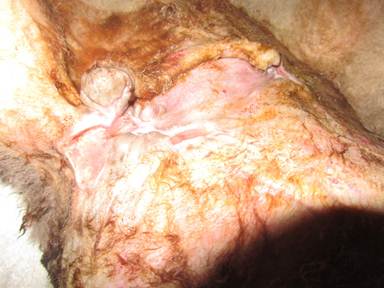 Close up of her pouch injury

"She was very old with her teeth well-worn down. Probably everyone else would have killed her, but we have rehabilitated her completely and now she is living on a one acre house yard and enjoying the rest of her life. 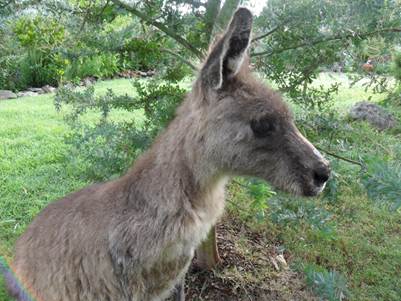 "Thelma today has fully recovered, is putting on lots of weight and is enjoying her new home where she has her own shelter and plenty of grass and bush. She is a dear old girl and the owners of the property where she now lives are very happy to have her.

"She may live another five years, as kangaroos can live up to 25 years in the wild. Unfortunately in the wild when the teeth wear out there is little they can do and they generally die from under nourishment. Thelma is still eating grass but is also given some high protein supplement.

"We have many stories about animals just like Thelma. Just as with humans, it’s the old animals that are forgotten about. However, the old ones have the best stories to tell!"

Thank you Steve and Rosemary for leading the way forward to a more hopeful future for injured kangaroos and for inspiring wildlife carers everywhere.

knowledge on kangaroos is not welcome

The success of relocating and rehabilitating injured kangaroos is a knowledge that is not welcome here in Australia by the mainstream. If healthy roos are seen as moving targets, when one is "down" or seen as an impediment to human progress, bullets are considered cheaper and preferable. Relocating kangaroos is more easily considered as inviable, and impossible, due to "welfare" concerns. This was what happened at South Morang, in Victoria. There was an attempt to relocate a few kangaroos, but it was deliberately set to fail, and thus they were shot as the DSE decided there were no other alternatives for the mob - all under the banner of animal welfare and public safety!

Bizarre science with regards to kangaroos, and whales!

A kangaroo was found in Yarrambat earlier this month with its scrotum missing. The wildlife carer Laurelle Erwin claimed it was cut out, and mercifully put the kangaroo out of its misery. However, an autopsy from a vet at Healesville Sanctuary gave the result as due to being dragged! Sanctuary acting communications manager said a sanctuary vet, who reaffirmed the autopsy results, sought a second expert opinion from Victorian Institute of Forensic Medicine pathologists. They denied a knife had been used! There were no drag marks on the body. It's all too convenient. Surely a drag injury would have tell-tale drag marks, and not knife marks? When it comes to kangaroos, and whales, there is a lot of bizarre and weird science around. They are basically political "hot-potatoes" and nobody wants to dispute the other side for fear of "offending". Like at Belconnen and Majura in the ACT, the scientists paid to do "research" on kangaroo damage mitigation were not independent but paid for by the ACT government, so they were selected especially and were obliged to produce the results expected. Similarly, we all know that Japan's "scientific research" on whales is a thin disguise for commercial slaughter, but what Australian politician has the courage to challenge their massive economic powers? Kangaroos are "protected" wildlife, but the DSE contradictorily freely give out ATCW permits on a whim! Public sympathy for kangaroos is prohibited, and any illegal killings and mutilations must be kept behind a political smoke-screen. There is a cold culture inside the DSE of shooters and red-necks from a colonial-era. Even the Victoria Ombudsman is unable to approach them, or the local Council. They are a monolith of power unto themselves. This culture needs to be broken down and community attitudes and local biodiversity needs to be protected from these cruel bureaucrats. NMIT's permit to shoot kangaroos must be revoked and democratic principles allowed to prevail. There is no science to support these shootings, and even the Victorian Ombudsman admitted it!