Professor Steve Garlick and his wife Dr Rosemary Garlick recently had this fascinating tale to share. Can you believe a kangaroo could be hit by a car and break off the bumper, be bashed by a drunk and be rehabilitated and released in great shape just two weeks later? An inspiration for wildlife carers everywhere! It's time people made more effort to help injured wildlife instead of killing them just because they are adults or hit by a car. A beautiful photo shows other kangaroos successfully relocated and thriving, welcoming Rosemary during a night-time visit

Two weeks ago we rescued a 25kg male kangaroo that had been hit by a car. According to the person who reported the incident, it appears the car driver ran into the kangaroo. The hit must have been with some force as his bumper bar fell on to the roadway as a result.

A drunk in another vehicle stopped and proceeded to attack the kangaroo with the bumper bar whereupon the kangaroo lashed out at the drunk with both legs and both the car driver and the drunk gave up and sped away.

You have to wonder what was in the mind of the drunk. Did he think he was doing the kangaroo a favour by killing it? Was he being plain sadistic? Or did he just not realise that wildlife carers can and do (some of them anyway) help such cases and put in a call to them?

Luckily, we were called out and, using our usual technique with net, blanket and hand-held sedation, we brought him home for evaluation and treatment.

We named him 'Bumper,' for obvious reasons.

Amazingly enough, his injuries were not that significant. Quite a few places where he had abrasions and cuts and some soreness to the pelvic/ sacrum area, but no fracture. His treatment included antibiotics (Baytril and Betamox) for infection, pain relief (Tramil), Modecate for stress, and plenty of rest in our straw bed area where we could keep a close eye on his progress. His recovery was quick and he wanted to go. 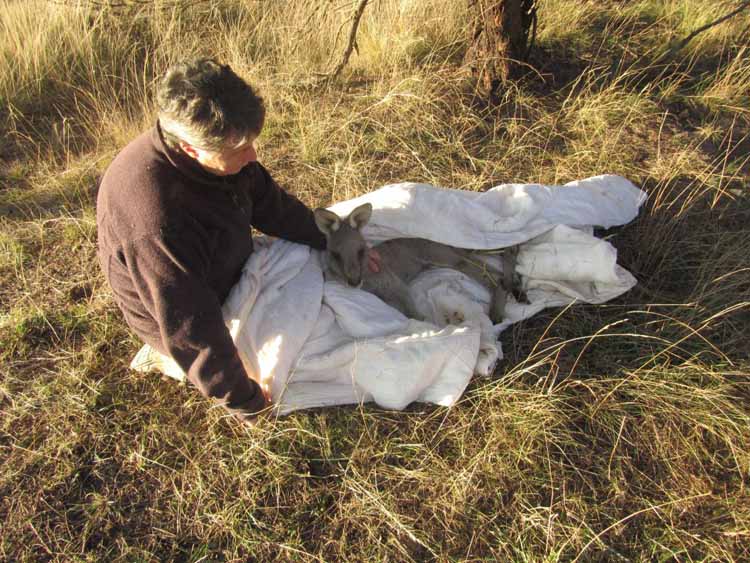 After only two weeks of respite, his injuries were fixed. So today (28th May, 2011) we translocated and released him on a safe site. We did not release him where we found him but probably within 10km of this location. We rescued him adjacent to a normally very busy road and farmland where it is rare to find kangaroos (most likely shot out by the local redneck farmers). Thankfully the rescue was very late on a Sunday night when the traffic was light. Ordinarily there would be quite a deal of traffic and it is a 100km speed zone. We released him, very gently, on 2,500 acres of wildlife friendly bushland. The picture on the right shows him waking up from the sedation prior to him hopping away (still a little wobbly from the sedation) into the distance. 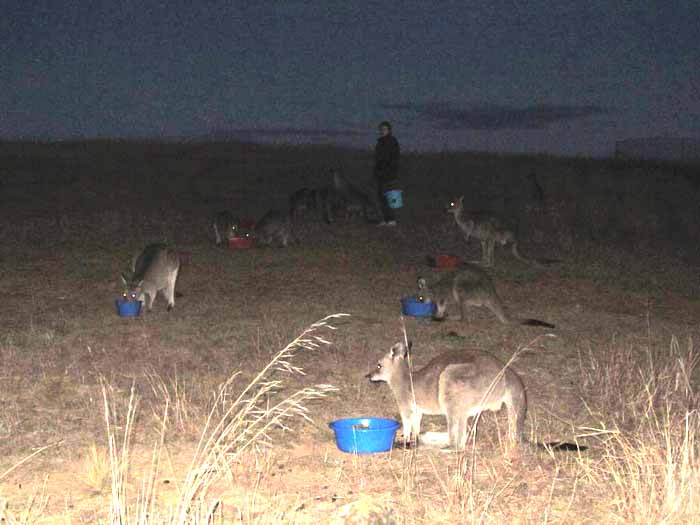 On our way back and almost dark, Rosemary (The 'Kangaroo Whisperer') did her thing of calling out to the kangaroos at the release site and within ten mins sixteen kangaroos had arrived from all over the place, as you can see from the picture on the right. Sometimes, there are literally mobs of them swarming around her!

Most of these particular kangaroos have now been released into the wild for 18 months but still remember us.

"As I travel through the Australian bush I find myself apologising for being human to all the wildlife I come upon. And if you could hear an animal’s quiet sobbing…what would you do?"

The great Job You and your team/ animal lovers Do

Hi I have just finished watching on Nat Geo..... (Foxtel) a documentary called Kangarro Kaos... And i Have been watching the great Job the team in Anglesea , Melbourne have been doing... please may you send them my blessings for a job very well done... i am an animal lover, who would love to work with animals and rescue them... I wish there were more people like the couple i had just watched, yourself and your work collegues, who care for animals and go out of there way to rescue them... More power to u all... i live in Campbellfield and have a larg creek that is home to many Kangaroos who have been trapped in that space because of all the construction that has been built in the area.... And everytime i see a Kangaroo that has been hurt by a vehicle on one of the road... It breaks my heart... Cos this is there land just as much as ours...i wish i lived on acreage,,, cos the kangaroos would of been more than welcome to make my land there home.... HOW anyone could hurt and animal intentionally iwill never and could never understand.... Please once again send my blessing to the team at Anglesea, cos they touch my heart while watching the show with there great work.... And please don't forget the rest of your collegues and ur self....i wish you all great health to continue helping and saving the kangaroos, and i'm sure other injured animals u may cum accross. All the best Mr Dion Cassar