Bankers and developers, like religion, should be separate from government

We don't just need to separate religion from from government, we need to separate business from government. Only a very troubled democracy would have a mass media that actually dignified Australian banker, Elizabeth Proust's expectation that the people of Melbourne should simply walk away from the few remaining rights they have in their fractured, fragmented and amalgamated local councils. If this kind of thing goes ahead, our ability to self-govern will be unilaterally taken from us in order to ram through a Hong Kong style megacity that no doubt would benefit the banks. It has already happened in Brisbane where there is only one huge council - the same one that is responsible for so many new Brisbane homes being built on a flood plain that took lives, health and security in exchange for quick profits from bank-rolled property developers and government friends and clients. 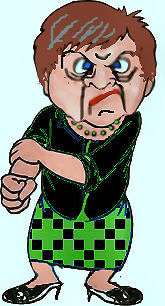 As quoted and described in this Age article, Elizabeth Proust, seems to mistaken citizens in an electorate for a bunch of clients in a bank. Her approach sounds just as aggressive, unfair and disenfranchising as the approach of banks in the way they impose charges for your money, even though they use that money to lend with and the way they unilaterally impose charges for their time, whilst taking your time. It seems to match well with the kind of attitude that has seen global financial institutions rob us all blind and then demand our governments to shake us down for more.

Only a very troubled democracy would have a mass media that actually dignified this woman's ill-conceived bullying attitude with publication. In this way the Age has legitimated a commercial headkicker as a person whom we should listen to, when her words demonstrate ignorance or obfuscation of the origins of the population growth she describes as 'mooted'.

"Ms Proust said there had to be sweeping changes to council numbers to reduce the ''not in my backyard'' phenomenon - residents objecting to developments in their neighbourhoods - and improve long-term strategic planning."

It is indeed frightening the extent of this newest campaign - from the Property Council of Australia, the mass media, the banks... to deprive Australians even further of rights, with only the Victorian Auditor General daring to speak out apparently. This is what he has said:

"Auditor-General Des Pearson and his colleague Paul O'Connor delivered a scathing assessment of the relationship between the public service and the government in giving evidence to a parliamentary inquiry into infrastructure projects.

They argued no effective mechanisms were in place to stop hundreds of millions of taxpayers' dollars being tipped into dodgy rail and road projects." http://www.theage.com.au/victoria/auditor-scorns-slack-officials-20120320-1vi0a.html

Of course the 'need' for these stupid and destructive projects is almost entirely driven by governments inviting more and more people to come and live in Australia at the behest of the developers who are laughing all the way to the bank. Perhaps Ms Proust also finds the whole thing a bit of a joke.

See below for extract from the Age article about what Proust said.

"Elizabeth Proust is calling for sweeping changes to the number of Melbourne councils.

MELBOURNE must slash its number of councils from 31 to one, according to former Melbourne City Council chief executive Elizabeth Proust, who also headed the premier's department soon after the last round of major council amalgamations in the 1990s."

Some news for Ms Proust

Jack Roach, President, Boroondara Residents’ Action Group (BRAG), writes, "I have news for Ms Proust, the number of councils and the residents who want to protect their neighbourhoods from unacceptable developments are not the problem. The problem is the rate of population growth, not the residents. The solution is to curb the population growth not build higher and bigger apartment blocks to house the new arrivals. Ms Proust who is currently Bank of Melbourne chair does not represent the residents of Melbourne, she is obviously speaking on behalf of her developer clients."

It's as though Ms. Proust has unconsciously blurted out that she wants to eradicate the rights of people to protect their personal amenity and that of their neighbours (motivated by “NIMBY” attitude) and blithely suggests a reduction of democratic opportunities to achieve this. I don’t mean that she doesn't think it. I'm sure she's quite genuine! But it is almost unbelievable that someone would actually say it to her fellow citizens! When she wakes up, surely she will be embarrassed and humiliated that she said this and that it is on record? Or have we shot right past any semblance of democracy and reached a new low benchmark that The Age is now quite happy to go along with?

The real NIMBY is Ms Proust

Actually, Ms Proust is defending her banking turf from the reduction in traffic that would come if the government and the banks etc stopped interfering in population growth. She is in fact saying, "No population stabilisation in my backyard!"

A chorus is starting

Colin Barnett, Premier of West Australia is calling for fewer council or a reduction in their powers and responsibilities in order to cope with population growth in Perth according to an article in the West Australian yesterday. http://au.news.yahoo.com/thewest/a/-/wa/13241174/premier-in-new-call-for...

Urgent - Councils should resign from the MAV

The Municipal Authority Victoria (MAV) ran a forum called "Housing Melbourne," on Thursday 22 March 2012, from 5pm – 7:30pm at the Spring Street Conference Centre, Theatrette. A number of people who attended say that it made a mockery of democracy. Remember, this was an event held by the Municipal Authority of Victoria, which is subsidised by residents' rates which pay for local councils to be members. It is quite expensive. Councils should resign from the MAV in protest at their values in running events like this. Kevin Hunt from MAB spoke about getting rid of the artificial Council boundaries so that they can really DEVELOP the city. He implied that people might comment on the end product but that they should have no rights over individual planning applications; that there should only be strategic planners and that they should get rid of prescriptive codes and statutory planners with their "rules and rulers" could keep the leafy suburbs. It was all so bad. An architect said they should get rid of lobby groups who canvas councils to refuse applications. He implied that only architects should have rights in this. This is not the first MAV forum that has shown a similar shameful attitude towards citizens' rights. The one before this was completely prejudiced in favor of development and actually made fun of people who tried to assert residents' and citizens' rights. There is no lack of speakers against this overdevelopment that tramples everyone's rights but the MAV shows that it is biased towards developers and that it has forgotten how to represent peoples' interests and rights. No-one should permit their rates to be used to supplement this travesty. It is not a local council organisation; it is a development organisation. People should refuse to pay their rates for anything to do with it.