Was there a Chlorine Attack against Civilians in Syria or is it War Propaganda? Article by Susan Dirgham

Why do Medecins Sans Frontieres (MFS), Avaaz and the Electronic Frontier Foundation push the claims of insurgents and their supporters? 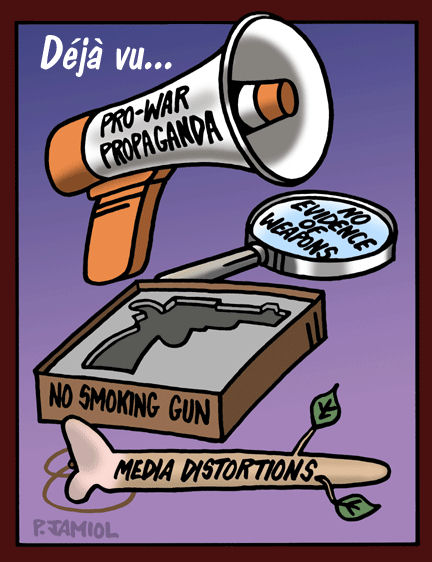 On 19 March 2015, #10;<p><a href=" http:="">Al-Jazeera provided details about the alleged attack from Sarmin’s ‘local coordinating committee’, which claimed three children, their parents and grandmother suffocated to death after a ‘barrel bomb attack in the town’. The activist group ‘said chlorine gas had been used’.

The “National Coalition of Syrian Revolution and Opposition Forces” draws attention to the call for a no-fly zone by Avaaz, following the alleged attack.

It is vital that detective work is done in regards to allegations such as these since they can be used to support an escalation of the war and terror in Syria.

Contributors to the website "A Closer Look on Syria" probe the claims and the 'evidence' in regards to this 16 March 2015 ‘chlorine attack’.

Below is some of the discussion from the "A Closer Look on Syria" page. This discussion relates to a video purportedly showing a helicopter dropping a barrel bomb with chlorine onto Sarmin. Like so much of the video 'evidence' presented by the militarized opposition in Syria or their supporters, the evidence in this video is questionable.
.

https://www.youtube.com/watch?v=apH795JpL7I Claims to show a barrel bomb attack, posted March 17, filmed in full daylight. Looks legit. Helicopter, right-shaped bomb, large blast. Might well be a recycled video, apparently too late to matter directly to the attack on the night of the 16th. I was tempted to try and geo-locate it in Sarmin, but only if it seems worthwhile (partly because I may only be able to rule it out, after lots of looking) --Caustic Logic (talk) 08:34, 29 March 2015 (UTC)

The video is titled "Throw explosive barrels on the city of Daraa Angel 17 32 015". Uploader LCCMedia seems to show videos from all over Syria --Charles Wood (talk) 20:00, 29 March 2015 (UTC)
Okay, will leave that to illustrate the dangers of taking suggested videos without proper scrutiny. :) --Caustic Logic (talk) 22:38, 29 March 2015 (UTC)
There are plenty of structures there to cue on, so if it's Sarmin, geo-locating might be easy. A couple of points—

1. Is that a barrel? Maybe the term has a broader definition in Syria.

2. It's falling through a slate-grey sky, but the ground shots show a complex sky w/ cumulus clouds against bright blue.

3. The camera is very steady but begins jerking around at 0:21 but the bomb doesn't land until 0:26. I don't have ear buds w/ me at the moment -- maybe the audio explains why all the pre-impact jerking.

4. There have been so many airbases over-run or almost over-run in the last 3 years. Does anybody have an inventory or guess as to what type aircraft and how many the insurgents (incl IS) are flying now? Pierpont (talk) 20:06, 30 March 2015 (UTC)
Just to reiterate the video is completely unrelated to the alleged attack in Idlib. The video is from Daraa. Given that I think it's two spliced videos that may not be related.

The currents state of play with the insurgent 'airforce' is they have got two L-39 trainers to the point of being able to taxi on a runway, but there is no evidence they have ever flown. I've not seen any helicopters that have been repaired enough to fly. As I recall, the two L-39s have now been captured from moderates by either DAESH or Jabhat al-Nusra. I forget which. Expect perhaps a suicide bombing at some stage -- Charles Wood (talk) 01:20, 31 March 2015 (UTC)

On the webpage, there is more discussion and analysis of the victims of this alleged attack as well as mention that some of the videos related to the attack have been uploaded by Al-Nusra.

There is also reason to question the objectivity and intentions of MFS and Avaaz, two prominent NGOs disseminating the allegations about chlorine or gas attacks. Both NGOs have much closer links with insurgents and their supporters than with Syrian people who support the Syrian army.

For example, in August 2013, MFS worked with doctors in rebel-held Ghouta, Damascus, and it was those doctors through MFS that provided details about hundreds of alleged victims of a sarin attack, allegedly by the Syrian army. MFS presentation of the allegations gave the claims some credence, yet later investigations and reports by highly regarded professionals in the west raise serious doubts about the Syrian army being responsible.

By working with doctors and medical personnel who operate only in rebel-held territory in Syria, MFS presents a blinkered and partisan view of the war. It should be noted that a co-founder of MFS, Dr Bernard Kouchner, was French Minister for Foreign and European Affairs Minister (2007 – 2010) under President Sarkozy, a president who was to give strong backing for foreign intervention in Syria. (In 2010, Kouchner was listed by The Jerusalem Post as number 15 in their list of the 50 most influential Jewish people in the world.) And interestingly, Dr Kouchner and MFS were involved in controversy in October 2008 when MFS protested comments made by Kouchner in Jerusalem. Kouchner said at a press conference, “Officially, we have no contact with Hamas, but unofficially, international organization working in the Gaza Strip – in particular, French NGOs – provide us information.”

As for Avaaz, a Guardian article indicates how heavily involved Avaaz is on the ground in Syria to support the insurgents. Another article by Jillian York, who heads the Electronic Frontier Foundation, provides another critique of Avaaz and its man in Syria (who is Lebanese), but it should be noted that Jillian York and the EFF actively support the insurgency in Syria, so her article is not as damning as it could be.

MFS, Avaaz and EFF seem to have the same Syrian brief: support the insurgents, damn the army and government, and ignore millions of Syrians who want peace and no foreign interference.

It should be noted that the sources of funding for both Avaaz and EFF are similar in that they are mostly 'establishment' sources, and there are links between George Soros / Open Society and both EFF and Avaaz, (This could be researched a lot deeper than is done here. One link between Avaaz and George Soros that is noted in articles involves Res Publica .)

A simple web search shows Soros has close ties with MSF , even if they are only socially and professionally supportive ties.

It is pertinent if Soros has links with groups such as Avaaz and MSF as he is a supporter of the 'revolution' in Syria and funds many other NGOs that take a partisan stand on Syria, e.g. HRW, Amnesty, Reporters without Borders).

The 2012 Guardian article "the Syrian Opposition: Who's doing the talking?" is required reading for anyone interested in understanding the war against Syria and the role of the US State Department, NGOs and other groups and individuals such as Soros who provide funding and support for opponents of the Syrian government (and the secular state?).

This article in New Republic is interesting in regards to the conclusion it draws after examining some of the actions Avaaz has purportedly taken in Syria:

…the temptations of power and fame seem to have encouraged Avaaz to sacrifice one of its most fundamental principles: That truth is an activist’s greatest weapon

Another more critical report on Avaaz is this one: "Avaaz: Empire Propaganda Mill Masquerading as Grassroots Activism".

Are there any humanitarian groups in the west that support peace and present the viewpoints of the general public in Syria, i.e. over 20 million people?

Presumably the vast majority of Syrian people put their trust in the Syrian Army to defend the state, as Syrian activist Edward Dark attested in a recent article. (Dark had originally supported the ‘revolution’.)

If Syrians don’t support their army, what is the alternative? Anonymous 'activists' and insurgents funded by the US, Saudi Arabia and Qatar? Yet it is insurgents and their supporters whom MFS, Avaaz and EFF support. Why?

For any chance of peace, such questions must be asked by us.