[Candobetter.net Editor: Updated with spelling corrections and some links on 2 July 20145.] My reaction to the short drama between Mr Mallah, Mr Ciobo and Tony Jones on the Q & A program of June 22 is different in some ways from Greg Wood's in his article earlier today, "Zaky Mallah and the Zombification of ABC Australia", although I agree with much of it.

Firstly, I have been pleasantly surprised at the mix of participants and topics in the last few Q & A programs. I thought the program of the 22nd June 2015 was really great. I thought it was fantastic to get a man acquitted of jihadist terrorism on to raise the issues that we all know exist in Australia's terrorism laws. 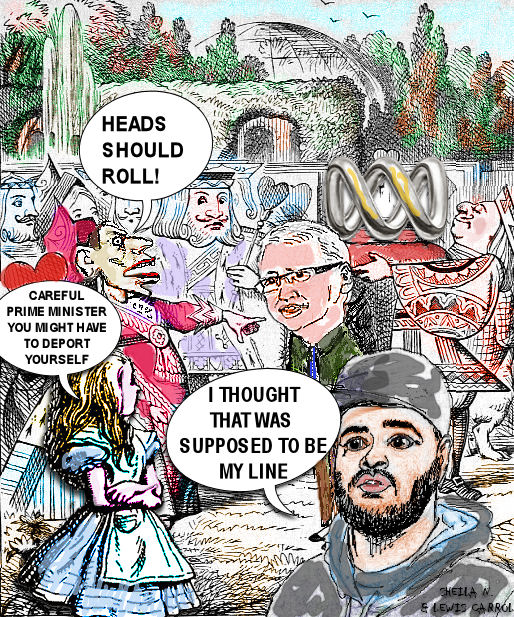 I was glad that Tony Jones and his team, whoever was responsible, allowed a citizen who had been at the margins of society to speak in this forum. With my own fairly extensive knowledge of interview techniques, I thought I recognised Ciobo's tactics as calculated to shame and inflame Mallah. Effectively Ciobo's personalisation of a legal issue caused Mallah to have to defend his 'face'. (You lose 'face' if you are attacked in public; it is much harder to deal with if a powerful figure tries to shame you in front of a crowd.) Very few ordinary people could have seen that one coming, nor could they have dealt with it any better. Perhaps only a seasoned politician could maintain apparent equanimity at such a public insult. Then again, maybe Ciobo was blowing off some steam he had accumulated after taking a drubbing from Antony Hegarty (Singer of Antony and The Johnsons) and Linda Tirago , (American anti-poverty campaigner). I think his response to Mallah probably even took Tony Jones by surprise, although I would have to review the podcast to know, and I'm not inclined to get into things that far.

Mallah's retort may or may not have been meant seriously and it may not have really made sense. Maybe he did mean, "Well, if you're so unforgiving and rude to a once extreme Islamist who has since tried to reintegrate and become a positive influence and make amends, that might reinforce the decision of others who are contemplating joining violent Islamist sects."

Or maybe he just retorted the first thing that came into his head, like a slap response to a public slap.

It is also shocking that Ciobo accused Mallah of having got off 'on a technicality' if, as Anne Aly, 'Counter Terrorism Expert' insisted on the next show, on 29th June, he was well and truly cleared.

But I also have to say that the whole government rhetoric which we live daily and which formed the context of the controversy on Q & A seems to me like an exercise in hypocrisy and a subtle encouragement for people to go to Syria and join 'rebel fighters'. It is our government and its slimy billionaire mentors in the United States and NATO who demonise the Syrian Government as an excuse to continue to rape and pillage a whole swathe of countries in the Middle East, in a fine old tradition begun at the beginning of the 19th Century in the Great Game.

You don't actually have to be a marginalised muslim immigrant with poor education to be taken in by the 'reforming the brutal Assad 'regime' (which is actually an elected government, not an illegitimate 'regime') spin. Plenty of apparently educated and intelligent people simply believe whatever Mr Abbott, Fairfax and Mr Murdoch's team tell them, which I find amazing.

The variation that probably occurs with some young muslims is that, as well as hearing about the 'brutal Assad regime' they also hear of how the West is raping and pillaging the Middle East. And they hear from religiose Arab sources, (sponsored by the Saudis, Turkey, Qatar for instance - Australia and NATO allies) ranging from The Brotherhood through Jabhat al-Nusra, al-Qaeda, to ISIS, that Bashar al Assad's government is too secular and is repressing people in possession of religious truth. They rarely hear of how that government is the only one that provides Palestinians with effective citizenship and housing, nor that Syria has taken in a huge number of refugees from the surrounding countries wrecked and disorganised by western interference.

It must require extreme learning curves of sophistication and self-control for people who work out for themselves in the field that ISIS and various religious 'revolutionary armies' are actually led by crims, nutters and/or cynical politicians, often armed and financed by oil-states, the US and NATO, to then find some good in our own government and press, which endorse and amplify a host of transparently inadequate reasons to keep on bombing, invading and interfering with the Middle East.

Apparently Mr Mullah has also said some very nasty things endorsing sexual violence towards women. Well, I hope he learns that that is a pretty stupid and scurrilous attitude sooner rather than later. Now that everyone knows, let's hope girls stay well away from him.

Back to the ABC. Q and A did nothing wrong, in my opinion, in inviting a citizen with an unusual experience of notable relevance to the terrorism laws being debated on the program. Mr Ciobo, who is the Parliamentary Secretary for Foreign Affairs and Trade, should be called out publicly for the way he addressed Mr Mullah. As Greg Wood (in Zaky Mallah and the Zombification of ABC Australia) implies, Mr Steve Ciobo sounded as fundamentalist and inadequate to foreign affairs as an infuriated Mr Mullah; he just had a nicer suit.

But the clash over terrorism and dual citizenship was only a cherry on a multi-tiered cream cake. Three guests, Grahame Morris, 'Political strategist' and Steve Ciobo and Joel Fitzgibbon (shadow minister for Rural Affairs, right wing NSW ALP) came off the worse as they were bluntly and skilfully challenged on issues of class entitlement, privatisation, poverty and environmental and social responsibility by Antony Hegarty and Linda Tirado.

Was that why the government really got so mad? Because the blokes on its side were so woefully inadequate to their ideology being challenged?

On the 22nd the Q and A program had as a guest Mr Paul Kelly, long time editor of The Australian. One felt as if one were in the presence of Mr Murdoch himself, as Mr Kelly articulated what strikes me as a delusional corporate media belief that the ABC is massively left-wing biased. My impression was that Kelly and another guest, Tim Wilson who is a former Director of the IPA and Free Trade Unit at the Institute of Public Affairs[1], were there more to claw back the lost face of the people from their political side of the fence who had been trumped the week before by Hegarty and Tirado. In the context of the Prime Minister's sublimely inappropriately themed recommendation that 'heads should roll' their poe faces were kind of scary.

In my view, the Government and the ABC management should step right back from any punitive or even finger wagging exercises against Q and A, which really does an excellent job of mixing right wing with left wing and 'academiccy' with business, ordinary or even marginalised. At candobetter.net we are often justly critical of the ABC, including Q & A, but not in this case.

[1] Now he is the Human Rights and “Freedom” Commissioner, serving under its President Professor Gillian Triggs.

"But I also have to say that the whole government rhetoric which we live daily and which formed the context of the controversy on Q & A seems to me like an exercise in hypocrisy and a subtle encouragement for people to go to Syria and join 'rebel fighters'. It is our government and its slimy billionaire mentors in the United States and NATO who demonise the Syrian Government as an excuse to continue to rape and pillage a whole swathe of countries in the Middle East, in a fine old tradition begun at the beginning of the 19th Century in the Great Game."

That, exactly, is the window with the vast dirty view that Mallah nudged opened and which everyone since, beginning with Jones at the immediate outset, has fallen over themselves to slam shut. I'm puzzled at how you might see Mallah's final observation as being ambiguous. It seemed crystal clear to me that he referred to the effect that Ciobo's expressed sentiment would created amongst the 'at risk' young moslem group. He confirmed this intent in a Guardian column the very next day.

Zaky Mallah: I stand by what I said on Q&A. Australia needs to hear it#fnQanda1" id="txtQanda1"> 1

This clarification is being steadfastly ignored whilst column miles continue to be produced burning him to create the smoke necessary to obscure that window with the dirty view. It seems like an important issue to me. I don't often see an innocent person machine gunned in public to cover up a high profile crime. The extent of those joining in the massacre, or at least complicit by toleration, is one of the most bizarre aspects.

I think you are right. Abbott does want them to go. It helps maintain the middle eastern destabilisation and it gives him a cheap effective electoral wedge. His electoral opponents are clueless and terrified as to how to handle this wedge.

What you are now viewing is the result of your HTML browser (Firefox, Internet Explorer or whatever), instead, rendering the following HTML code:

<blockquote>
<p><strong><a href="http://www.theguardian.com/commentisfree/2015/jun/23/zaky-mallah-i-stand-by-what-i-said-on-qa-the-public-needs-to-hear-it">Zaky Mallah: I stand by what I said on Q&A. Australia needs to hear it</a></strong></p>
</blockquote>

Zaky Mallah: I stand by what I said on Q&A. Australia needs to hear it.

Also, the HTML codes for paragraph:

... aren't strictly necessary on a Drupal content-managed web-site such as candobetter.net. The simple carriage return (and, preferably, an additional carriage return to separate one paragraph from the next), currently used by most contributors, is sufficient. (Purists, possibly including one of the candobetter editors, prefer to include <p> and </p>.)

Good stuff Sheila, because this bullshit just goes on! And thinking about Q&A – despite its ‘show’ like put-off, it has been sometimes the only real place where there is argument between people in different camps, and unscripted in front of a live audience. THIS is what makes it a good and useful program! I was just listening today to an interview with David Jansen the climate change denier, followed by an interview with one of the scientists who wished to knock some sense into his head. She was really good, and had a beautiful metaphor for the situation – that we are all in a truck heading downhill towards a chasm, and someone in the cab wants to start a study into whether Gravity really exists, before we put on the brakes! But the problem was, as with almost every interview we hear, that these two people weren’t being interviewed together, and able to argue directly for ten or fifteen minutes unscripted, so that some issue can be thrashed out. The sort of thing that RT likes to do, but which our producers shy away from because of the dangers someone might say something to wake us all up! So I think we need more Zaky Mallahs, and we need to hear their questions – like ‘Who is supporting ISIS?’.... !