About APop - The Australian Population Institute

APop or The Australian Population Institute http://www.apop.com.au/, is an organisation put together by developers and other members of the growth lobby to promote a 'big Australia' - that is, a huge population in Australia. APop campaigns for higher and higher immigration and also for policies for bigger families. Although almost entirely officiated by members from industries driving the growth lobby, the organisation has hosted talks by high profile and credible-sounding people, like university lecturers or authors, which added cachet to their big Australia agenda. The ABC used to quote them a lot as though they were a disinterested demographic organisation, but seems to have stopped doing this in past few years, perhaps due to complaints about APop's growth agenda affecting its objectivity, but perhaps more likely due to a decline in APop activities. 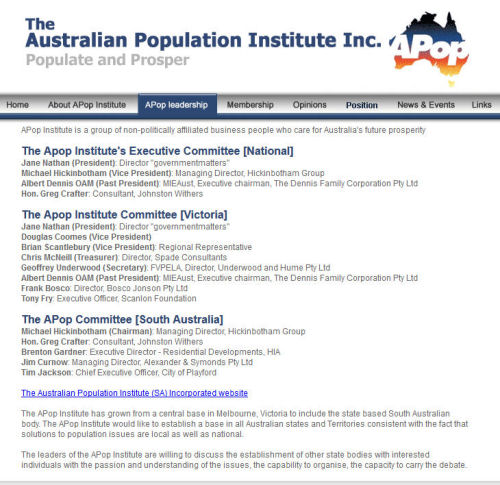 See http://www.apop.com.au/news.html At first APop seemed to be the peak growth lobby developer body, with branches in all or most states, but the Property Council of Australia appears to have taken over the baton as the ultra peak body. However, APop is still in there with a fascinating cast of growth lobby stars with fingers in property development pies at all levels. I have attached a picture of the current APop front page, followed by some information about the industry backgrounds of Committee members. Note that there are quite strong links with the Scanlon Foundation which itself has strong links to ATSE and to the Multicultural Foundation of Australia and thence to most recent prime ministers and opposition leaders. APop in 2009 hosted Professor Andrew Markus, who "presented "Mapping Social Cohesion 2009: The Scanlon Foundation surveys". The presentation provided an overview of the Scanlon Foundation survey findings, with particular attention to change over the last two years and to the challenges facing maintenance of a large immigration program. "

"The Committee for Economic Development of AustraliaCEDA Conference, November 1999, inaugurated the Australian Population Institute (APop), a group with the sole purpose of promoting a big Australian population. Apop seems to be mainly composed of business people involved in the property development industries.[1] Altogether nine papers were delivered in favour of, or neutral about, population increase, including that of the key speaker, Professor Withers.[2] Without in any way impugning the sincerity and disinterest of the academics involved, Tom Morrow points out in Growing for Broke, that Apop - composed of businessmen with a vested interest in maintaining high population growth - thus benefited from the cachet of academic disinterest, whilst only airing one point of view.[3] Morrow also criticises the lack of an ecological perspective." (Source: Sheila Newman, The Growth Lobby in Australia and its Absence in France

[1] This information was yielded by investigating the business associations of the officials of Apop as listed on the Apop website and downloaded on 20/7/2001 from http://www.apop.com.au/people.htm. Additional information about business interests was obtained from the Business Who's Who of Australia, Dun and Bradstreet Marketing P/L, 35th Edition, 2001.
[2] Tom Morrow, Going for Broke, Tomorrow Press, 2001, p.109
[3] Ibid.,"Five of the papers were delivered by university professors, two by PhDs, one by a Federal Cabinet Minister and one by a Shadow Cabinet Minister: impeccably qualified commentators, all - and none of them directly from the corporate sector that was hosting the event."

Not only is the Australian Population Institute a front for the growthists' pushing their agenda, but "Sustainable" population fronts can also hide behind this increasingly meaningless word. It's become an oxymoron!

There was a "Sustainable Population Forum" last Thursday, in High Street Thornbury. John Thwaites as a former Premier of Victoria, represented the Monash Sustainability Institute. Contradictorily to the name, he's an unashamed and unabashed pro-growth pusher! He's supporting of Melbourne's population boost to 8 million, and used all the stock and trade words of creating a sustainable city, with more people in apartments, and that we can "de-link" population growth from the impacts in the I=PAT equation! He claims water usage and green house gas emission have declined, despite population growth. He said we should welcome all the asylum seekers and embrace Asia to our heart!

Despite the forum title, of "Sustainable" population, it was chaired by a team of pro-growth activists, unquestioningly linking economic growth population growth. There was nothing said about the folly of the desalination plant, the homeless, the crowding, the congestion, the loss of amenity and unemployment.

Kevin O'Connor, is Professorial Fellow in urban planning (needs JavaScript). He was not quite as big a growthist, and at least acknowledged some limits to growth, but he also assumed that our population doubling in 35 years was inevitable, without questioning the politics. With vested interest in urban planning, he obviously thinks that "development" is the silver bullet to cramming more people into cities.

One woman was a wildlife rescuer and she reminded the speakers of the horrendous carnage on our roads, and that carers get no funding, not even for the bullets to kill mortally injured kangaroo! Limits to our environmental resources, and species extinctions, were given scant regard.

Lucinda Hartley gave some comforting words about our wonderful public spaces and urban designs, so we can all adapt happily to small apartments and have it endorsed as socially progressive and modern.

The myth of Cornucopia is vibrant, and many organisations based presumably on "sustainability" are really hiding their growth agendas, fooling the public who are naive enough to believe that it's inevitable!