We are asked by the United States to believe that the murder by the US Airforce of 80 soldiers in the Syrian Arab Army (the army of the elected Syrian government) was simply a 'mistake'. It seems more likely that the US is trying every trick in the book to stuff up all attempts at peace in the region. Is their ultimate aim is to wipe the Middle East clean of any organised peoples, stuff up Russia (using NATO/EU which they are desperately trying to prop up) and take over the petroleum assets? Whilst the US is an uninvited and illegal presence in Syria (whereas Russia is invited) it is also, with cooperation from the Saudis, keeping the price of oil down (by flooding the market with short-term fracking products) to assist promotion of instability in the oil-dependent states in the Middle East and South America/Central America, which the US hopes also to take over. The only hope here is for a Trump win because Hillary will only keep all this going, whereas he has made noises about keeping the US nose out of other peoples' business. As to whether all the American troops and commanders and allies in the Middle East and Syria are in on this, it is possible that they are not, as the following article from RT suggests, which makes the whole thing even more shocking. The following videoed interview and article were published as breaking news on RT news on 17 September at https://www.rt.com/op-edge/359690-us-syria-airstrike-unlikely-unintentional/.

Annie Machon is a former intel­li­gence officer for MI5, the UK Secur­ity Ser­vice, who resigned in the late 1990s to blow the whistle on the spies’ incom­pet­ence and crimes with her ex-partner, David Shayler. Draw­ing on her var­ied exper­i­ences, she is now a pub­lic speaker, writer, media pun­dit, inter­na­tional tour and event organ­iser, polit­ical cam­paigner, and PR con­sult­ant. She is also now the Dir­ector of LEAP, Europe. She has a rare per­spect­ive both on the inner work­ings of gov­ern­ments, intel­li­gence agen­cies and the media, as well as the wider implic­a­tions for the need for increased open­ness and account­ab­il­ity in both pub­lic and private sectors. 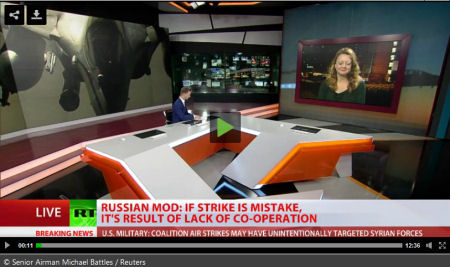 The US must cooperate with Russia on intelligence matters in Syria, former MI5 agent Annie Machon told RT, expressing doubt over Washington’s explanation for the “unintentional” raid which killed over 60 Syrian soldiers on ISIS’ frontline.

‘US is defending ISIS’: Russia convenes UNSC meeting after US coalition strike on Syrian army

Cooperation with Russians is “vital” in Syria because of the ever-changing battlefield situation on the ground, which US forces cannot grasp from the air, as they are not working with the government in Damascus. Without this cooperation, Machon fears, the ceasefire achieved by both sides on Monday could falter without securing its main objective.

Commenting on the actual US strikes which killed at least 62 Syrian soldiers and wounded around 100 others near the eastern city of Deir ez-Zor, on the front line of the struggle against Islamic State (IS, formerly ISIS/ISIL), Machon hinted that Washington’s decision to attack Syrian forces was likely premeditated.

“I find it slightly unbelievable that the Americans could hit this target thinking this was ISIS when in fact ISIS is laying siege to the city. And the Syrian forces for years now have been known to be holed up in that city. So it seems just strange that the Americans are just saying it was a bit of a mistake,” Machon told RT.

The former MI5 agent pointed out that Russian role in Syria is clear while the US policymakers are “divided” over their objectives in Syria.

“We have some of the military that say they really need to go after ISIS, that that is the threat to the whole West. They want to work with Russia. Yet there is still this hawkish, neocon political approach which really just still wants to get rid of Assad for other strategic reasons, like supporting the regional American allies like Qatar and Saudi Arabia in the Middle East.”

Machon recalled a PBS interview last month during which former CIA deputy director Michael Morell who told host Charlie Rose that Damascus – as well as Iran and Russia – should “pay a big price” in term of casualties in Syria. Ahead of the US presidential election, Machon wondered if Saturday’s strikes stemmed from Morell’s views, who is a strong supporter of Hillary Clinton.

“He [Morell] was advocating the bombing of Assad, not to kill him, to scare him. So I’m wondering if there are elements within the US power structure that are actually going ahead ... [with] this sort of plan and bombing Assad’s military forces to scare him, to scare the Russians, to just try to make the point. And they are actually carrying this out already, rather than it just being a wish list from the former acting [deputy] director of the CIA.”

Another interpretation of the reasons behind the US strikes on Syrian army positions, Machon believes, could be to “reassure the so-called moderates,” who are funded and trained by the US, that Washington still supports them.

“So if indeed this was a planned air strike and it was indeed there to reassure the so-called moderate groups, that would make sense,” she explained.

If that is the case, Machon says that “Americans are dealing with fire” because the so-called moderate rebels often defect to Jihadist groups along with the military hardware provided by the US to fight against American forces and interests on the ground.