How will the candidate seeking your vote act to prevent the US plans to kidnap Julian Assange?

As found by the Australian Federal Police in 2010, Julian Assange has committed no crime. 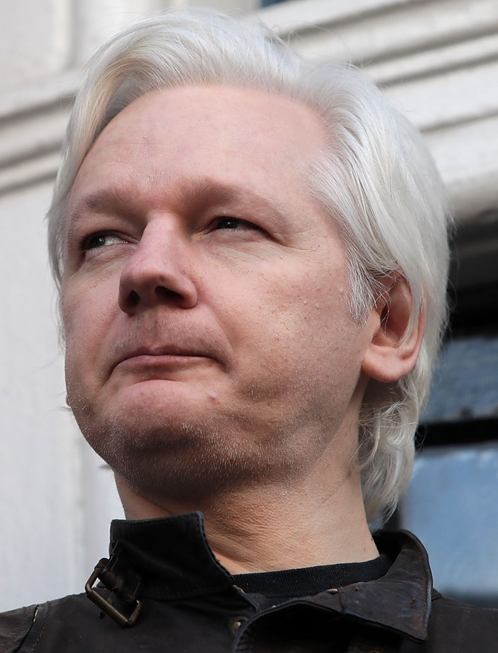 Yet, Julian Assange, the courageous and visionary founding editor of Wikileaks, who is not even a citizen of the United States and has never been there, now faces the threat that he will be extradited to the United States from Britain. There he is to supposedly be tried only for the 'crime' of 'conspiring' in 2010, with Chelsea Manning to have her retrieve classified U.S. defence department information which revealed to the world evidence of U.S. war crimes. - the sort of 'crime' that many serious journalists have engaged in.

Amongst the most infamous of crimes revealed by Wikileaks are "Collateral Murder" (video embedded below) and the torture of Iraqi prisoners by U.S. military police at Abu Ghraib.

The publication of the Pentagon Papers revealed to the world, much of the hidden truth behind the United States' war against Vietnam and helped bring it to an end.

Since its founding in 2006 by Julian Assange, Wikileaks, by revealing so many dark secrets of the U.S. military, the U.S. government and their allies around the world, similarly held them to account and reduced their ability to wage war against the peoples of the world and to interfere in their domestic politics. It is for this reason that the U.S. wants to get their hands on Julian Assange - to get their revenge by shutting him up, by torturing him, by jailing him for years and possibly worse, thereby making him an example to deter other journalists similarly reporting what the US government wants hidden.

It is debatable whether Julian Assange, under a fair and open judicial proceding, could even be found guilty of anything under US Law - certainly not if the presiding judge were to uphold the First Amendment to the U.S. Constitution which guarantees the right to free speech. But, it is highly unlikely that the rogue U.S. regime, which routinely flouts the laws of other nations as well as its own, will give Julian Assange a fair and open trial. He can expect no better treatment than it has already meted out to other whistleblowers like William Binney, John Kiriaku and Edward Snowden.

Even now, it is not too late for the Australian government to act to end the imprisonment of Julian Assange. They could loudly demand of the UK government to refuse any extradition request from the United States. They should immediately dispatch to England a contingent of Australian Federal Police to escort him back to Australia and demand that he be immediately released.

However, in all probability, the Australian government will, instead, persist with its shameful complicity with the UK and US governments. In this case the issue must be given utmost priority in the forthcoming Federal Election. Every candidate seeking your vote on Saturday 18 May must be either held to account for his/her shameful treatment of Julian Assange or asked what he/she intends to do for Julian Assange, and free speech, democracy and human rights, should they win office.

The Socialist Equity Party, which has organised a number of rallies to demand freedom for Julian Assange, are fielding candidates in this election.

In the video below, Liberal Democrats Senator Duncan Spender speaks up for Julian Assange

The video below is of length 1:01 minutes.

None of the those standing for the major parties, including any of the currently elected Greens, are likely to raise their voices for Julian Assange during this forthcoming election campaign, so anyone wishing to use the election campaign to help Julian should look for other candidates to give their support to or even consider standing themselves.

The video below is of length 17:46 minutes. Warning: It contains disturbing images.

[2] As of Saturday 30 April, the only mentions of Julian Assange on the One Nation web-site are 3 comments beneath the article Major Parties snuggle up to Chinese Communist Party Donor (12/4/19):

What is One Nation’s position regarding Julian Assange? for me this is the biggest election issue, one that will definitely decide my vote. - 13 Apr, 2019

As Julian Assange is an Australian, who is going to defend this wonderful person for standing up for the truth and exposing corruption? Pauline Hanson, please stand up to the US bullies and fight for this mans freedom., Please! And most dont want 5G in Australia. These are HUGE issues for the upcoming election. And Our Farmers are number ‘1’ Priority. Make Australia first before the politicians decide to help others abroad. There ought to be more referendums on issues like this and not solely decided by bleeding heart Labor and Greens, they are ruining Australia, put us in the RED and dont care. Thank you. 13 Apr 2019

[3] Scott Ludlam was forced to resign from the Senate in 2017 because he held New Zealand as well as Australian citizenship.

That war crime footage is truly shocking. Under what cultural doctrine were these soldiers trained?

Why haven't Corbyn and Shorten acted to stop Assange's arrest?

From Assange judge is 40-year ‘good friend’ of minister who orchestrated his arrest (2/12/21) by Matt Kennard and Mark Curtis | Declassified UK :

Julian Assange’s fate lies in the hands of an appeal judge who is a close friend of Sir Alan Duncan - the former foreign minister who called Assange a “miserable little worm” in parliament.

Lord Chief Justice Ian Burnett, the judge that will soon decide Julian Assange’s fate, is a close personal friend of Sir Alan Duncan, who as foreign minister arranged Assange’s eviction from the Ecuadorian embassy. The two have known each other since their student days at Oxford in the 1970s, when Duncan called Burnett “the Judge”. Burnett and his wife attended Duncan’s birthday dinner at a members-only London club in 2017, when Burnett was a judge at the court of appeal.

Now the most powerful judge in England and Wales, Burnett will soon rule on Assange’s extradition case. The founder of WikiLeaks faces life imprisonment in the US.