The Level Crossing Removal Authority (LXRA) current design for the new railway station will permanently occupy a significant part of the Lorne Parade Reserve at the expense of open public parkland.

Despite lack of details from the LXRA, the public documentation provided indicates the permanent footprint of the Reserve could reduce by about 30%. LXRA is yet to confirm the physical and overshadowing intrusion from the new railway station and other railway infrastructure, whether there will be any level changes to the topography of the Reserve and the extent of vegetation removal proposed, but it is clear the infrastructure will have an intrusive presence on the Reserve.

The trench is expected to significantly encroach along the length of the Reserve, reducing the permanent footprint of the Reserve. 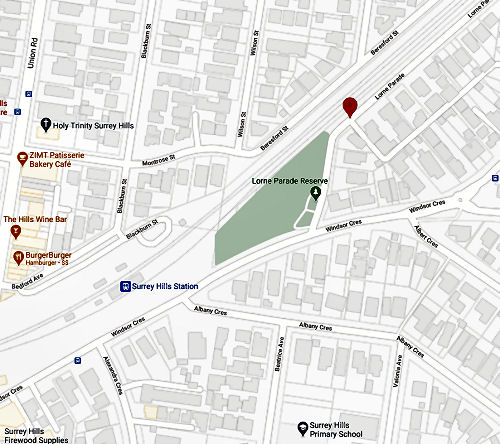 All of the significant mature trees adjacent to the existing rail corridor, that are a feature of the neighborhoods character will be permanently lost and construction activity is likely to remove a significant number of others that create our wonderful treed canopies and deciduous colours.

The proposed main southern station exit/entrance leads directly into Lorne Parade Reserve rather than via a concourse to the northern and southern carparks (and Union Road commercial district) and the associated pathways is permanently reducing the footprint of the open green space in the Reserve.

The proposed ‘kiss and ride’ facility unnecessarily directs people to the Reserve and the associated infrastructure permanently reduces the footprint of the green open space in the Reserve. This could be avoided if it was located in the carpark.

The primary entrance/exit for the Station is on the northern side of Lorne Parade Reserve. The prominent height of the proposed station will create shadow on the Reserve.

Vegetation, that is not replaced with permanent infrastructure, will be demolished for the sole purposes of storage and construction convenience.

A statement of replanting does not mean the Reserve will be protected or replanted to maintain the neighborhood character and amenity. The LXRA can plant any type of tree and vegetation anywhere and meet their commitment.