France will soon become President of the European Union.

The French Parliament is scheduled to vote on the first of a new set of environmental laws, springing from an environmental summit - La Grenelle - profoundly reviewing the state of the Environment, before mid July 2008.

During the French presidential elections, which Sarkozy won, he promised to hold an important environmental summit founded on an historic 1968 one, Les accords de la Grenelle. The 1968 Grenelle (Summit) is remembered for having led to a 25% increase in social security benefits, marking the beginning of the famous “social dialogue” in France. 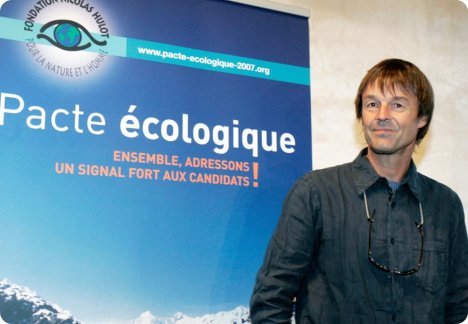 On France2 Public News of Thursday June 5, Nicolas Hulot, film-maker, t.v. star, and ecological militant, head of the Nicolas Hulot Foundation for Nature and Man, was asked to comment on progress made since the recent French summit on environmental law, which his Foundation provided much of the impetus for. Hulot said that the proposed laws were, “too little and too slow,” and he commented on the amount of resistance and lobbying.

He said that he must be careful not to disrupt a good dynamic. “In France’s summit we got a sum of objectives and measures that we have never had before and we are in a position that no country has been in before ; the country has come together and is readying itself for action, so I have to be objective.” He added, however, that France still has to look at things as they are and not kid herself.

“At the moment every environmental indicator shows that the situation is accelerating, so that, whatever becomes of the summit objectives, anything we achieve will be a catch-up.”

“A number of things agreed to in the Summit have lost ground, for example carbon taxes have been delayed … And, renovation of old buildings - because new construction is only 9% of the building stock - the rest is all old - renovation of old buildings was supposed to become the standard. And green wedges; there were supposed to be connections between all the ecological zones; this was supposed to be put in place, but it hasn’t happened. These things could be brought up the list again by the members of Parliament (les deputés).”

Hulot said that he hoped that Members of Parliament would not descend into the depths they did over Genetically modified crops law, and instead will vote responsibly together by unanimously voting the Environment summit law (la loi Grenelle)… and perhaps bring some things forward, because so much has been scheduled too far ahead, to 2015, 2020 etc.

Hulot was asked by the announcer on the French News: “It’s true that the context of things has changed, the process has accelerated. Take for example, the cost of petroleum, would you accede to the demands of the occupations that are angry about this… by softening the taxes to reduce the amount they pay?”

Hulot: “Of course not, although that is easy to say if one is not specifically suffering. The point is that everyone needs to get real. We are now in food crisis, energy crisis, crisis of natural resources and primary resources, all combined with the economic crisis, bringing us to one of the greatest crises that the world has ever known. So, what do we do? Do we wait until we run into dead-ends everywhere, or do we take strong measures? France cannot all by herself be virtuous.”

She could, however, improve the situation by leading the European community.

“France could do it with La Grenelle… correcting and enriching a number of provisions. She could find legitimacy at the moment when she enters the Presidency of the European Union to lead our partners into still more structured measures…more radical…”

Asked to talk about petroleum in this context, Hulot, exclaimed, “Excuse me, but on Petrol, we still don’t have a Plan B. Petrol has still not hit bottom. We cannot take short term measures permanently. Petrol is going to become rarer and rarer and therefore more and more expensive. Therefore, for example, in a number of sectors regulation will become necessary, and probably reconversion.”

The announcer asked, “So there is no point in trying to soften the pain of high prices in petrol…?”

Using the French metaphor, ‘Reculer pour mieux sauter’, Hulot said that, “We have to step back in order to be able to advance all together. To move in a united way.”

He was then asked, “But what should we say to the occupations that are hardest hit?”

Hulot: “Well, in the first place you have to look at their problems case by case, for instance, in fishing, 3 or 4% of the sector is responsible for the greatest draw-down on oil … this can be discussed…For road transports, we need to look at the overall transport situation …We cannot only look at road transport alone. All cannot be as it was before. If people think that everything can go on as it has done, and we react constantly in crisis mode, we are going to finish up in a massive recession. We know that those who will be hit hardest are those who are already in difficulty. For example, the fishing industry, agriculturalists, and truckies..”

“Now we need a real Marshall Plan, at the level of France and Europe, to orientate massively our investments in our economies for this transition, and for solidarity (mutual cooperation).”