A Re-Classification of Devilbend is critical to preventing the total demise of wildlife on the Mornington Peninsula: designation change from a ‘Natural Features Reserve’, to a ‘Nature Conservation Reserve’. Interconnecting wildlife corridors, through private land, minimum 200 metres in width and the rigorous preservation and restoration of Devilbend as a central core Reserve are essential. 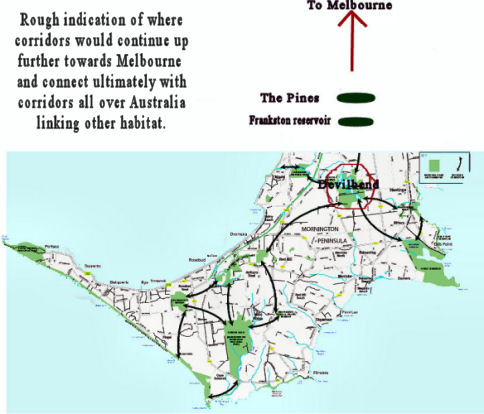 Re-Classification of Devilbend is critical

by Maryland Wilson, President of the Australian Wildlife Protection Council

[Editor:See Background to this Campaign at the bottom of this article for the wider politics and land-use planning history]

A Re-Classification of Devilbend is critical to preventing the total demise of wildlife on the Mornington Peninsula. A designation change from a ‘Natural Features Reserve’, under Section 4 (1)(m) (and Part 3 of the Fifth Schedule) of the Crown Land Reserves Act 1978 to Devilbend as a ‘Nature Conservation Reserve’ under Section 4(1)(0) (and Part 1 of the Fifth Schedule)of the same Act, is absolutely critical if we are to save remaining native species on the Mornington Peninsula. Interconnecting wildlife corridors, through private land, minimum 200 metres in width and the rigorous preservation and restoration of Devilbend as a central core Reserve are essential to reserve the area for ‘the propagation or management of wildlife or the preservation of habitat'

The precautionary principle: “We must act together to prevent impacts, particularly where there is potential for serious or irreversible damage to occur. A lack of scientific certainty or information should not delay these actions., towards working towards restoration as an intact haven for wildlife.” Parks’ Guiding Principles Appendix 1 Devilbend Reserve Community Workshop, 22.11.07 P5 Sect. 3

Genetic dispersal and variation is the genetic key to survival of species. The prime reason why re-Classification of Devilbend as central core habitat link for wildlife corridors is critical. It is to prevent genetic drift so species have genetic diversity /variability dispersal through wildlife corridors, to ensure their survival. Native species are trapped in isolated, fragmented areas of habitat, and populations without interconnecting habitat in which to move, breed and live, eventually implode and die-out, causing local extinction.

A holistic approach is needed to manage Devilbend Reserve as a necessary tool of management to save rapidly declining species from certain demise if we do not heed their vulnerable state, now subject to drought and climate change. With roads and railways proposed, dredging on both sides of the peninsula, massive population growth and industrial development, inappropriate recreational users of Devilbend, birds and animals are threatened. Devilbend is not monitored to a degree sufficient to prevent illegal activities already occurring, let alone on a scale proposed in the Draft Mgt Plan 2008.

The Mc Phail Report slates Victoria for failing to protect native species, clearing more land than any other state in Australia. The critique of Victorian bureaucrats impacts directly on the importance of Devilbend as core nucleus habitat, on the Mornington Peninsula, which must be preserved as a sanctuary.

An AWPC Devilbend leaflet produced with Malcolm Legg ecologist and Glenn Ehmke of Birds Australia reveals our strong conservation concern for the future survival of wildlife:

“When wildlife is lost from a landscape/region, the number of species decline and local extinctions result. Extinction however, is a process, not an event, and the time scale over which species loss occurs is highly variable and species-specific. Therefore, despite the fact that major changes are in many cases yet to be fully manifested. This “time-lag” between landscape change and species loss is termed “termed “species relaxation” or “extinction debt”.

A number of studies both overseas and in Australia where landscape modification is very recent (-200 years) have identified extinction debt as a significant concern for biodiversity conservation in highly modified landscapes. Even in the absence of further direct loss and fragmentation of habitat, degradation of habitats will continue as weed invasions, dieback, edge effects and other processes impact isolated remnants, and isolated populations will continue to suffer the effects of genetic drift, inbreeding and susceptibility to chance events. Thus, the local populations of some species may be expected to decline to extinction over time. This is reflected in the large number of threatened and declining species in the region today.”

Devilbend as a wildlife sanctuary

It behoves government to pay more respectful attention to expertise and public opinion the Devilbend Foundation and AWPC bring to this inquiry. Government's job is to adapt to our demands, not to impose the demands of developers and big business on us or the rest of the people and creatures on the peninsula. Our very strong opposition to developing Devibend as a playground for recreational users, with all the negative ecological impacts on native birds and animals continues to be ignored by Parks.

Kangaroo Management in Devilbend and the Mornington Peninsula

Existing habitat in parks and reserves on the Peninsula is not good kangaroo habitat- Kevin Street, retired Wildlife and Fisheries officer

• the role of Devilbend as core nucleus habitat - Devilbend could support a significant kangaroo population but seems so sparsely populated, due to unfriendly fencing, hunting in years past by leasees and others.
If we are to sustain significant kangaroo numbers on the Peninsula then we need to come up with a management plan that may include such things as:

• habitat improvement in existing reserves and parks
establishment of important wildlife corridors linking Devilbend to Greens Bush, Arthur’s Seat, etc so that range animals like kangaroos can have freedom of movement for genetic dispersal
• Grazing leases are incompatible to conserving and protecting biodiversity
• Natural regeneration approach focusing on highest quality areas to start
• Identify wildlife corridors in reserve and linking outside


“The total disappearance of the Southern Brown Bandicoot on the Peninsula is a classical example of the Government’s ignorance. There were thousands and now there are none left. We always get politely steam rolled. It is most disheartening.”

Background to this campaign

Mornington Peninsula, south of Melbourne, Victoria, Australia, where Devilbend is located, is a biodiversity hotspot and, until Premier Jeff Kennett came to power in 1999, it was a rural area.

Because of that government and the following Bracks and Brumby governments' undemocratic pro-development agendas, it was re-termed part of 'Greater Melbourne'. This was meant to make it incapable of resisting a massive development program, which to date includes mass movement of people to many new suburbs, talk of a second city to Melbourne, and a 400 ha industrial development at Hastings.

In the mean time a toll-way is scheduled to splice the Peninsula from North to South, cutting through and affecting major remaining habitat.
Arguably it is these kinds of expansionary activities, requiring huge amounts of fuel and materials and funded on debt, which have brought the world economy to a skidding halt.

At the same time, bizarrely, the area became a UNESCO 'biosphere', but ecological activists who worked to have it declared a biosphere were successfully dissuaded from commenting on government plans to massively ncrease population on the Peninsula, even though it was obvious to 'Blind Freddy' that this would destroy unprotected grasslands and the fauna habitats. The carrot and stick approach was used.

And Devilbend, until recently a reservoir, now decommissioned, only narrowly escaped becoming a housing estate. An unsuitable compromise was instead unilaterally inflicted by the Bracks Government, in a sort of activities theme park, with little or no effective sanctuary for our terribly ill-treated Peninsula wildlife. All big animals are on the wane - notably kangaroos and koalas. We must have a fauna protection and promotion policy.

Maryland Wilson, of the Australian Wildlife Protection Council, has the key to this in her promotion of Wildlife Corridors.
Editor