The ACT Government has obtained licences to kill 1,600 healthy kangaroos, plus an unknown number of joeys, in Canberra’s nature reserves over the next 3 months. However, for the first time, Animal Liberation ACT is standing up for the ACT’s native animals by challenging the Government’s killing program in the courts. The start of the annual kangaroo kill has been delayed after Animal Liberation ACT successfully obtained an injunction in the ACT Civil and Administrative Tribunal on 20 May 2014. Support is now needed to continue our Legal Challenge to Stop the ACT Government's Kangaroo Cull. The newly established Animal Defenders Office has provided pro bono legal services to get us to this point. We now need to raise funds urgently to cover the costs of a barrister for the legal battle ahead of us in the main hearing which began on Tuesday the 3rd of June 2014. The hearing ran for four days, and a decision is expected next week on whether to allow the killing of more than 1,600 kangaroos on Canberra's 'nature' reserves. Small and large donations welcome. Donate via Go Fund Me at http://www.gofundme.com/SaveRoos Legal costs are expected to $20,000. Let's make this case huge! Animal Liberation ACT would like to sincerely thank the Animal Defenders Office for their incredibly hard work and professionalism in taking this case to a new level. We would also like to thank our Kangaroo Campaign members for all their work behind the scenes in assisting the legal team with the case. Thank you in advance supporters! 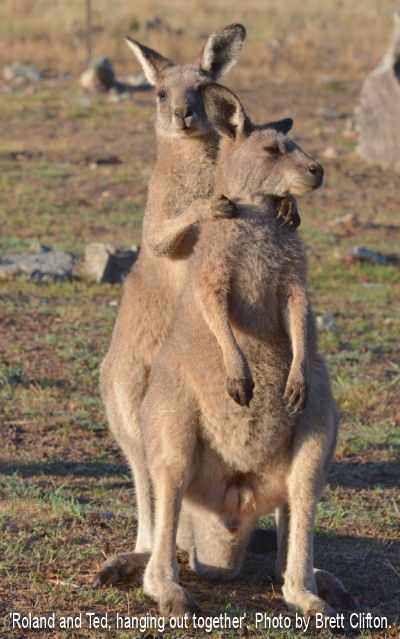 Donate via Go Fund Me at http://www.gofundme.com/SaveRoos

For other candobetter.net about kangaroo culls, especially in the ACT see this tag.

"ACT government senior ecologist Dr Donald Fletcher [see more below] defended the research behind the cull, as a hearing before the full bench of ACAT entered its third day on Thursday [5 June 2014]. [...] At one point [Animal Liberation's lawyers] argued a graph, which contained data used to justify the shootings at one reserve, was "pretty useless", although Dr Fletcher stood by most of the figures in the report.

Dr Fletcher admitted he hadn't made adjustments to the population figures throughout the year, and didn't take into account fluctuations due to the time of year the kangaroo populations were counted. He said that meant the government was likely to be ''under-culling'' this year. ''One of the flaws is I haven't allowed for that spring increment,'' he said. Dr Fletcher said several times he couldn't remember how he had calculated certain figures in the population growth estimates. When questioned by lawyers, Dr Fletcher said one of the figures in the data did not demonstrate good science.

[...] On Wednesday, former CSIRO plant scientist Dr William Taylor told the hearing there were "significant deficiencies" in the data the ACT government used for the cull.

The tribunal allowed last year's cull to go ahead following a similar legal challenge brought by animal welfare groups, and a decision was made to target fewer animals.

More than 1500 kangaroos were shot dead in last year's cull, including 355 [in pouch joeys]." Source: http://www.theage.com.au/act-news/act-government-ecologist-defends-kangaroo-cull-figures-at-hearing-20140605-zrz34.html

For the first time the 'science' behind the annual Kangaroo cull has been called into question and we have to thank everyone who worked tirelessly behind the scenes to create such a strong case against the Government. Thank you also to those who attended the hearing, your presence was extremely supportive. And a huge thank you to the ADO team who without their knowledge, professionalism and what became hundreds of hours of work, we would not have had a case.

Animal Liberation ACT’s lawyers, the Animal Defenders Office, persuaded a judge to grant a stay against the kangaroo cull on the basis that the government has failed in its duty to prove the kangaroo cull had improved biodiversity over the past six years.

“They have not collected any baseline data or monitoring data on the conditions of other species on the reserves they say they are saving,” says legislative drafter Ward, who moonlights as a volunteer with the Animal Defenders Office. “If the government wants to go and kill more than 1,600 healthy wild animals, we have to be clear that the science is impeccable before we let them do that.”

One scientist who was closely associated with the Belconnen cull and the Majura cull, was Don Fletcher. Fletcher is the Senior Ecologist in Research and Monitoring in Parks, Conservation and Lands, Department of Territory and Municipal Services, ACT. His involvement in the Belconnen Roo cull seems to have been officially limited to capturing then releasing female survivors after inserting contraceptives in them. He was one of the writers of the public consultation document leading up to the Majura cull.

He defended these culls and has defended the assessments leading up to the Majura culls in a public consultation document. Yet his own thesis on the “Population Dynamics of Eastern Grey Kangaroos in Temperate Grasslands,” seemed to discredit claims at the basis of these culls, which were too high population density and a need to manage it down to one kangaroo per hectare. For instance, he wrote on page 237 of his study that :

“The study did not provide evidence that high densities of kangaroos reduce groundcover to the levels where erosion can accelerate. Unmanaged kangaroo populations did not necessarily result in low levels of ground cover. Groundcover had a positive but not significant relationship to kangaroo density, with the highest cover at the wettest site where kangaroo density was highest. Weather has an important influence on groundcover.[1]”

He also wrote that some of the populations he was studying were at the highest density recorded. They ranged between 4.5 and 5.1 kangaroos per hectare. The density in the studies below was expressed in square kilometers. To get density per hectare, divide by 100. [2] Fletcher wrote:

Coulson’s study of kangaroos at 2.2 per ha was published in 1999 as Coulson G, Alviano P, Ramp P, Way S “The kangaroos of Yan Yean: history of a problem population”. [3] Graham Coulson’s Yan Yean article is frequently cited by kangaroo population students and he seems to be thought of as the originator of the “one kangaroo per kilometer” ‘rule’.

I did contact Dr Fletcher by email, and he was initially quite friendly, but when I attempted to ask him questions about his thesis responses to my emails ceased, even though I re-sent the emails.

[1] Don Fletcher, “Population Dynamics of Eastern Grey Kangaroos in Temperate Grasslands,” was on line as a pdf, which is the form I downloaded it as. Now apparently only available from University of Canberra Library, reference: http://nla.gov.au/anbd.bib-an42269526. A book by the same title and author has also been published.

The ACT government should end their pretence

Dr Don Fletcher is a paid mouthpiece for the ACT government that clearly wants to get rid of the kangaroo "problem". As such, he will of course do the job he's paid to do, and scientifically defend the kangaroo killing. It seems that our ACT government has become extreme environmentalists with all their concerns about protecting native grasslands! Never mind that the areas around Canberra were wrecked and over grazed by sheep for many years, and that urban sprawl means native grasses are dug up and destroyed - along with the legless lizards and golden sunmoths etc! It's a bit like the scientific whaling argument! Commercial science can be manipulated to be anything one likes, for economic or cultural purposes! Since the ICJ has ruled out Japan's scientific whaling as being fraudulent, they have now ditched this façade and will openly do commercial whaling! The only "experts" called into the ACT Civil and Administrative Tribunal case should be independent witnesses, without salaries paid by the ACT and those with vested interests in killing the kangaroos. The ACT government should come clean and admit the real reasons for wanting the 1600 kangaroos dead! Instead of environmental concerns based on flimsy evidence of native grasses being threatened by native animals, the real problem is no doubt quite mundane and pragmatic - they just want the roads free of them!

ACT Animal Lib and other activists were doomed to failure, and now the shooters will being their bloody business of slaughtering Canberra's nature reserves' kangaroos. The Civil and Administrative Appeals Tribunal is now satisfied the government had a “solid scientific basis” for authorising the cull, and while the survival of eastern grey kangaroos as a species was not threatened, "over-grazing and degradation of the environment might lead to a significant impact on endangered communities in the reserves". Canberra Times: Canberra's kangaroo cull to begin after challenge fails These hypocritical "green" Pharisees go to extreme lengths to protect the grassland environments from, ironically, native animals, despite the expert witnesses and emotional pleas! When you want governments to rein in climate change and take action to protect great swathes of forests, native habitats, and even the Great Barrier Reef, they ignore the public and go ahead and submit to the economic benefits of mining and logging companies. There's no qualms about clearing land for property developers, but they focus on grasslands that are naturally managed by kangaroos. and kangaroos are treated as vermin! Without wildlife corridors, of course the kangaroos will eat grass! Regional Friends of Wildlife condemn the cull. "This cruel annual slaughter of kangaroo families is unethical and immoral. There is no evidence whatsoever of any benefit that has accrued over the past four years despite government claims of protecting endangered species and other unnamed plants and animals by killing kangaroos,” says RFOW spokesperson Philip Machin. In terms of yet another cull in 2014 Mjadwesch says: "There is not a single threatened species known to be impacted by kangaroos in the ACT, in fact it was demonstrated that several threatened species in the ACT benefited from kangaroo grazing". Dr Dror Ben Ami of THINKK at University of Technology Sydney wrote to Minister Rattenbury in 2013: "Eastern Grey Kangaroos are keystone species for the grasslands. They are responsible for habitat structuring, nutrient cycling, and other grassland species rely on their presence… Records (since the 1990s) indicate stable densities of 2 to 4 kangaroos per hectare (in the ACT)" . Like the Pharisees Jesus condemned for hypocrisy, (Matthew 23:24) these extreme pseudo "environmentalists" are filtering out the "gnats", the trivial issues, while the "camels", the big blanket environmentally destructive projects, get swallowed - and are approved with impunity!