The South Eastern Red-tailed cockatoo is under increased threat from Victorian government fire "management" plans. A large part of its critical habitat will be burnt. (Editor: This article was originally submitted as a comment. The subject is so important we promoted it to an article and we recommend the Birdlife Australia site it gives a link to for the bird. The site is brilliantly written and illustrated, engrossing and informative on birds and 'fire-management' problems, although it is more diplomatic than this article, which pulls no punches. Readers of candobetter.net will know that there are a lot of people who aren't too impressed with state government fuel management programs. See similar pages on bushfires and on black cockatoos. These birds are wonders of nature, personalities in their own right, and incomparably beautiful. How could anyone allow them to perish?) 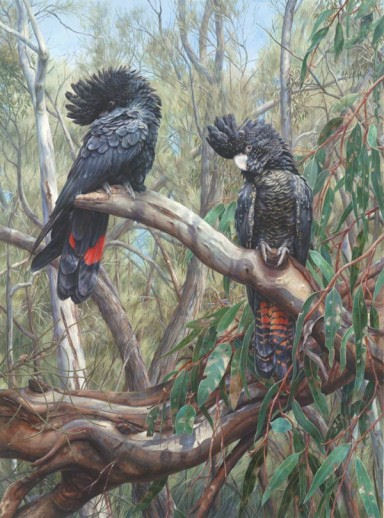 WA drivers have been warned to slow down due to large numbers of endemic black cockatoos on the roads, trying to find food. More than 85 black cockatoos have died after being hit by cars in the past two months prompting a warning for south coast motorists to be extra cautious.

They are often encountered feeding on the shoulders or verges of country roads where they are attracted by spilled canola seed and other germinating grains from passing grain trucks. "Carnaby's, Baudin's and forest red-tailed black cockatoos are all endangered, so every preventable death is a blow to the survival prospects of the species," Department of Parks and Wildlife senior wildlife officer Rick Dawson said.

There are three species of black cockatoo in south-western Western Australia and they are all threatened with extinction.

"Carnaby's, Baudin's and forest red-tailed black cockatoos are all endangered, so every preventable death is a blow to the survival prospects of the species," he said.

It's a similar tragic story for Baudin's Black Cockatoos. Baudin's cockatoos have already disappeared from over 25% of their former range, mainly due to land clearing for agriculture. Habitat loss still continues - for urban development, forestry and mining operations. The total population is estimated at around 12,000 and is listed in the IUCN Red List as Endangered.

Most habitat suitable for breeding and feeding for Carnaby's Black Cockatoo in the Wheatbelt has been cleared entirely or fragmented. In addition, clearing of heathland surrounding breeding sites has reduced the survival rate of fledglings by decreasing the available food sources for the young.

It takes over 100 years for woodland seedlings to mature and form hollows suitable for nesting, and there's a loss of native food sources caused by urban development on the Swan coastal plain. According to Birdlife Australia, once numerous, the charismatic and highly mobile Carnaby’s Black-Cockatoo is now classified in WA as ‘rare or likely to become extinct’ and federally listed as Endangered. The WA Department of Environment and Conservation estimates that around 200 Baudin's cockatoos are shot each year to protect orchards.