The tenuous link between population and prosperity - Article by Katharine Betts

Linking population growth with productivity and labour participation is problematic, just one of many questionable assumptions made in the Intergenerational Report. Author Dr Katharine Betts is Adjunct Associate Professor of Sociology at Swinburne University of Technology. Article first published at https://theconversation.com/the-tenuous-link-between-population-and-prosperity-38291

The report claims such an increase will offset demographic ageing and boost economic growth, but neither claim is borne out by the evidence. The effects on ageing are both trivial and transient and, when economic growth is considered in per capita terms (and in terms of real welfare), the increase will certainly be detrimental.

The narrative of the Intergenerational Report is that the population will be growing (though this, it transpires, has little to do with ageing) and the larger population will need more services. This will put pressure on the budget. So how are we to build “a strong and resilient economy” and lay “the foundations for future prosperity”?

It is no surprise to readers of this report’s three predecessors that the answer lies in the odd trifecta of population growth, productivity and participation.

The scenario that the report focuses on is one where the total fertility rate remains at around 1.9, life expectancy is in the mid 90s and net overseas migration (NOM) is held at 215,000 per annum. The report is careful not to make too much of its immigration assumption, presenting the increase in percentage terms. If the absolute number for net migration remains constant, this percentage measure will always show an unthreatening decline year-on-year, because the base population on which it is calculated will have grown. (After all, the second person to step ashore from the First Fleet in 1788 increased the European population by 100%, and the 11th by only 10%.)

The report links migration with economic growth in a curiously indirect fashion:

This is another way of asserting that high migration will increase aggregate GDP. Yes it will, but this has little to do with individual welfare. Here per capita GDP is the relevant measure.

The report projects a growth in aggregate GDP of 2.8% per annum over the next 40 years, but that of per capita GDP is projected at only 1.5%. So while the population will be growing briskly, the welfare of individuals will not be keeping pace with that of the economy as a whole. This may not concern the minority who profit from larger markets, but it will impact on voters. 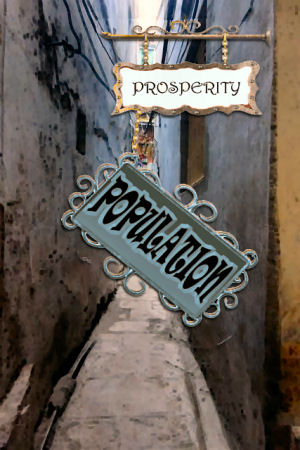 Moreover the deep shortcomings of GDP as a measure of well-being are now all too well known; for example the misery that commuters experience stuck in traffic shows up as a positive for GDP (more petrol consumed, more costly wear and tear on vehicles), and the GDP takes no count at all of the drag that the congestion imposes on productivity. In contrast the State of Australian Cities report predicts traffic congestion in the major cities will cost Australians A$20.4 billion a year by 2020 and stories of its ill effects on productivity are commonplace.

The report also says, quite modestly, that migration “has an impact on the age distribution of the population” (because migrants tend to be younger when they arrive). Other authoritative government reports find little support for the argument that high migration cures demographic ageing so a modest statement is prudent. But the scenario the authors have adopted is one of historically high migration (the first Intergenerational Report assumed NOM of 90,000). Their subsequent justifications for their NOM of 215,000 in fact turn both on that of growth in aggregate GDP and the anti-ageing theme. (Yes, high migration will reduce the median age by around five years - temporarily.)

The report proposes a population increase of 12.8 million above and beyond where natural increase would take us. To what end? In June 2014 the total population of Sydney, Melbourne, Brisbane and Adelaide was 12.6 million. The report does not explain how building the equivalent of all these cities again in just 40 years will enhance our productivity.

Given the infrastructure demands, it is not surprising that data from 32 OECD countries show no statistically significant association between productivity and population growth.

Growth in labour productivity by population growth, 32 OECD countries, 2009 to 2012

Better that the trifecta of the three Ps were reduced to a duo of productivity and participation. High immigration may have no effect on productivity, as the figure above shows, or as the Australian experience suggests, may reduce it. And it can be irrelevant to participation.

This shows that labour-force participation can vary without necessarily affecting economic well-being and that it can be shaped by a range of factors other than demographics — for example, accessible childcare, employers’ willingness to hire women and older people, and cities that permit workers to get to work in a reasonable fashion.

It is therefore not surprising that evidence from comparable OECD countries shows no statistically significant association between the proportion of people aged 15 plus in the labour force and the proportion aged 65 plus.

Labour-force participation as percentage of the population aged 15 plus, by age structure, 31 OECD nations, 2012

Too much emphasis can be placed on the crude demographic measure of the proportion of a population of so-called working age: 15 to 64. Equally, too little can be made of the social, economic and policy factors that help or hinder labour-force participation.

As the figure below demonstrates, quite a few people aged 65 plus are in the labour force and many of those aged 15 to 64 are not.

Population, June 2014 by age, sex and other characteristics (23.5 million)

The figure also highlights the dependence of children and young people. No one under the age of 15 is in the labour force, and many of those aged 15 to 24 are full-time students not in paid work.

Indeed it is only in childhood that chronological age inevitably means dependence on others. Now that we are emancipated from the hyper-youthful populations of the past, more adults are freed from the unavoidable labour of caring for the young. They are freed for work, for caring and for building strong communities.

It's naively assumed that the workforce can be increased, and the dependency ratio of taxpayers to those dependant on them, can be swifty manipulated by simply adding more people! In fact, "just add more people" seems to be the default method of addressing any economic challenges we have! The reality is that young people are not acting as dependents, with a high rate of unemployment, especially among youth. We have an over-supply of workers, and skills not being utilized. Schools are being forced to cope with unprecedented social fallouts, rather than fine-tuning careers and promoting educational opportunities. The latest Intergenerational Report (IGR) claims that we have an "ageing population", and we need more workers to sustain their health care and pensions in the future. On the contrary, there is a demographic imbalance of young people who are dependant on families and welfare, who've hit a dead-end in our economy. Rather than an "ageing population" crisis, we should be concerned about the dependency rate of our present young people - and how we'll raise taxes for their welfare into the future. There needs to be economic activities for our human resources to actually labour in, and be productive. All indications are that Australia is not gaining prosperity and wealth by our rapid population growth! Our budgets are failing to provide the surpluses needed for basic services and welfare. All Ponzi schemes need a never-ending supply of new participants, but eventually collapse as the costs of maintaining them eventually dwindle and they are exposed!