The corporate media speaks with one voice against Russia. There is NO mention that the U.S. commanded NATO military alliance has pumped tons of lethal weapons and U.S. advisors into Ukraine for eight years. (International Action Center)

Stop NATO War on Russia! No Sanctions! No War!

Since the 2014 U.S.- backed coup in Kiev, the U.S. has aided fascist forces in relentlessly shelling the 1,200 mile Russian border to target the Peoples’ Republics of Lugansk and Donetsk, killing over 14,000 people in the Russian-speaking Donbass region. 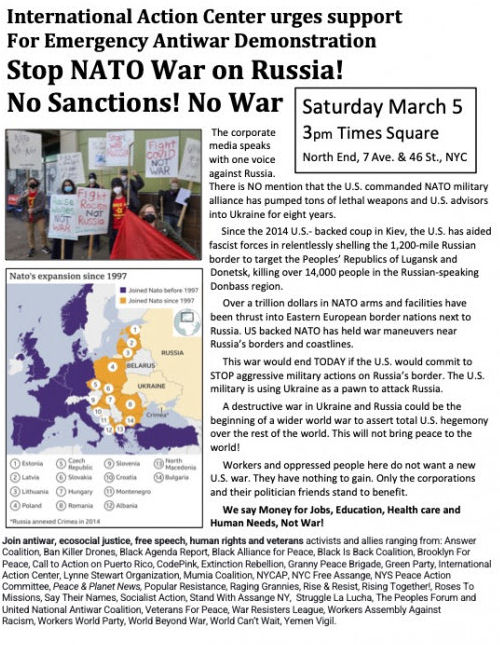 Over a trillion dollars in NATO arms and facilities have been thrust into Eastern European border nations next to Russia. US backed NATO has held war maneuvers near Russia’s borders and coastlines.

This war would end TODAY if the U.S. would commit to STOP aggressive military actions  on Russia’s border. The U.S. military is using Ukraine as a pawn to attack Russia.

A destructive war in Ukraine and Russia could be the beginning of a wider world war to assert total U.S. hegemony over the rest of the world. This will not bring peace to the world!

Workers and oppressed people here do not want a new U.S. war. They have nothing to gain. Only the corporations and their politician friends stand to benefit.

We say Money for Jobs, Education, Health care and Human Needs, Not War!