The Bushfires Royal Commission plan of increasing "controlled burning" in the Mallee is an example of a one-size-fits-all mentality.

Birdlife including the Mallee emu-wren and black-eared miner, both of which are endangered, and threatened marsupials such as the western pygmy possum, face a dramatic loss of habitat if the commission's advice to triple the rate of prescribed burning to 5 per cent of public land each year is followed.

It would threaten the long-term survival of the region's native wildlife, a scientific study has found.

A four-year study, led by Professor Clarke of Latrobe University and Professor Andrew Bennett of Deakin University, found that large parts of the Mallee have not burned for between 20 and 140 years.

The Mallee has been recognised as the most threatened environment for birds in Australia.

The Striated Grasswren is a little bird with rich and varied songs, and require large clumps of spinifex to hide in. The size is only suitable 25-40 years post-fire. Tree hollows, needed by many kinds of animals for nesting or roosting, take at least 40 years to develop in mallee. 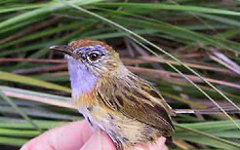 Mallee Emu-wren (Stipiturus mallee) is one of Australia’s smallest birds, weighs up to 6.5 grams. It uses its size to great advantage to move quickly through dense shrubs, darting about amongst the very prickly spinifex. Very large or frequent fires can eliminate these birds from large areas, leaving them isolated in small, scattered locations, unable to escape further fires. It is globally endangered.

Species such as the Pig-footed Bandicoot, Bridled Nail-tail Wallaby have disappeared in the last 150 years. Many fascinating species remain vulnerable, including 6 species of small mammals that are valuable enough to be treasured and protected.

Professor Clarke said the Baillieu government needed to respect the unique characteristics of the Mallee in managing fire risk.

The Flora and Fauna Guarantee Act (FFG) and Environment Protection and Biodiversity Conservation (EPBC) Act should be used to override the Bushfires Royal Commission and stop any actions that further threaten species and their habitats.

Department of Sustainability and Environment (DSE) chief fire officer Ewan Waller said the program would be the biggest in recent years, weather permitting. Burning is by far the best way to manage fuel loads within our forests and give protection to Victorian communities, Mr Waller said. What about species who make homes in this "fuel load"? "Victorian communities" are more than humans!

Ecological sensitivities and endangered wildlife are just left to be collateral damage!

This year is the International Year of Biodiversity, and it is not too late for some real action to protect some diminishing native species.

Copies of the Mallee Fire and Biodiversity Project are available here.

With environmentally illiterate leaders, it is not to far stretched to see our property market extending into the Mallee. Once the area has been denuded of the responsibility of endangered and vulnerable native fauna (and which aren't?), the land would be "vacant" and sterile enough for urban sprawl, regional development, and more mega stores and housing estates. Under the Brumby government, housing was reaching close to the bush-fire prone areas of Kinglake and St Andrews. This means that the understorey, instead of being a layer for biodiversity, became a threat to residents. If bushfires are part of our bush's natural reinvigorating regime, then why are people being pushed further into these vulnerable areas? Logging and "management" means that forests become more open, more exposed to oxygen and the fuel drying out. Professor Kanowski, professor of forestry at the Australian National University, said wet eucalypt forests, characterised by tall trees and a dense understory, did not usually burn well because they were too damp. But during extremely hot, dry weather they could burn, and burn ferociously. More buffers might be needed, but they also might need to be kilometres deep. Professor Kanowski's main message was that in some areas, and under certain weather conditions, there was a high risk of fire and people had to live with that.. If these areas in the Mallee have not burnt for up to 140 years, why the need to deliberately do so, and kill of the reptiles and birds that will have no hope of escaping, and nowhere to live if they do?