Electricity distribution and privatisation is costly

Prime Minister Julia Gillard was playing politics when she used a speech to the Energy Policy Institute of Australia on Tuesday to blame state governments for soaring power prices.

Queensland has had a 80 per cent hike in household electricity prices in the past five years. Mr Newman and every other Premier will seize every opportunity he can to blame his predecessors for financial and policy mismanagement. Editorial - shedding light on power prices. Victoria is a good example of soaring electricity prices due to privatization.small>(Republished from comment posted at http://candobetter.net/node/2834#comment-8672) 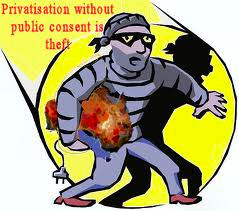 Prime Minister Julia Gillard was playing politics when she used a speech to the Energy Policy Institute of Australia on Tuesday to blame state governments for soaring power prices.

Queensland has had a 80 per cent hike in household electricity prices in the past five years. Mr Newman and every other Premier will seize every opportunity he can to blame his predecessors for financial and policy mismanagement.

Queenslanders are also paying the price for meeting growing demand, both from an increasing population and, in the southeast in particular, a rapid take-up of air conditioners, which places big strains on the system on the hottest days of the year. High rise living means being captive to powered appliances such as air conditioning, clothes drying and heating even in the more southern states too.

Privatising the Government's electricity businesses to put them in the hands of efficiency and profit -focused private companies. Ostensibly this gives consumers a "greater choice" and "more competition" but also frees governments from the public responsibility for announcements of electricity price increase for the next 12 months. It also free governments from trade unions and industrial relations.

Ms Gillard was "trying to force privatisation" on state-owned utilities "because they can be regulated through corporation's power", Premier Campbell Newman said.

Prior to Kennett’s election, the government-owned State Electricity Commission of Victoria (SECV) was responsible for the supply of electricity in Victoria. Despite being accused of being unproductive, an Electricity Supply Association study of 1000 utilities around the world found that SECV was in the top ten for efficiency of resource use and that it was also highly efficient in terms of technical efficiency of distribution. The SECV in fact delivered affordable electricity to consumers whilst making a healthy profit. Project Victoria nonetheless called for the privatisation, deregulation and corporatisation of the State’s electricity demonstrates its ideologically driven nature.

Victoria's State Electricity Commission (SEC) generated and sold power to Victorian consumers from 1926 to 1998. In every single year it reduced the real price of power to customers. This meant that for ordinary households buying electricity took a smaller part of their earnings in each successive year. The SEC also trained thousands of apprentices in electricity and other workplace skills. Eventually, many of these highly skilled tradesmen found their way into the wider workforce. Now, “skills shortages” are being used to justify increasing permanent immigration to Australia.

In a similar manner, the SEC also trained engineers and other skilled workers, not all of whom chose to remain in the commission's employ. Either way, the community got the benefit of skills-training provided by the SEC. This is the same scenario with public transport, Gas and Fuel, and Board of Works (public water supplies) being privatised.

In 2000-1 the price of electricity in the National Electricity Market increased by 60%. When retail deregulation was introduced in Victoria, price caps continued with ‘safety net’ prices being set by the government to avoid the political implications of these large price increases. Privatisation of electricity in Victoria had failed to deliver any increased generating capacity and generator breakdowns were threatening blackouts.

A new report, Victoria in Future 2012, shows that the state's population is expected to grow from 5.6 million to 7.3 million over the next 20 years, an average annual growth rate of 1.3 per cent.

Melbourne's population is expected to grow at the same speed, from 4.1 million to 5.4 million, while regional Victoria's growth rate will be slightly slower, at 1.2 per cent.
Make room state population set to soar

According to a new report, about $2.5 billion over 15 years could be saved if electricity distribution reliability was slightly reduced, according to the Australian Energy Market Commission's (AEMC) review of rule changes for the state government.

More than $11 billion is poured into power infrastructure to stop "blackouts" occurring in peak periods, totalling about four days every year. Reducing reliability is an assault on productivity, on our lifestyles, and on our energy bills.

Now, we could be forced to compromise electricity reliability to contain the costs of power.

The real costs of supplying energy are in distribution rather than generation. The "poles and wires" must be replaced, maintained, and also expanded to cope with population growth. Thus, reliability will be compromised to pay for economic growth.
While Julia Gillard blames the States for the surging costs of power even before the introduction of the carbon tax, it is Federal policies that drives our population growth.

Julia Gillard will pledge to act on soaring electricity prices that add billions of dollars to household costs. She is blaming state governments for adding at least $7 billion to electricity costs over the next four years. Ms Gillard will cite the dividend payments to state governments as a key reason for the price shock being felt by ordinary households, as they help cover the cost of the state dividends.

NSW households have seen their electricity prices rise by 18 per cent both this year and last. Other states have seen comparable increases.

Half of this year's increase was due to the carbon tax and renewable energy requirements, some of which were introduced by former state ALP governments. The other causes were those identified by the Prime Minister: increased charges for the price-regulated poles and wires networks. With 30 more years of “sustainable growth”, the poles and wires network will keep rolling out!

Julia Gillard's conversion to privatisation might be self-serving in seeking to draw attention away from the carbon tax, but it also offers the prospect of bipartisan support for full privatisation of the electricity supply industry.

Why have the Greens failed to oppose privatisation?

The following is a response to a #comment-178392">claim in a discussion on johnquiggin.com that the Australian Greens are a left wing party whose policies are too left wing for most voters. I believe the evidence shows the opposite to be the case. Update, 12:35AM, 14 August: My attempt to post a copy of this comment just now to johnquiggin.com failed. Comments have been disabled, presumably because Professor Quiggin is upgrading his web-site.

The reason we do not have an ascendant[1] green left political party is because most people are not so stupid.

In fact, every opinion poll of which I am aware has, in spite of overwhelming media propaganda in favour of privatisation, shown that the vast majority of Australians oppose privatisation. This puts them, on that issue at least, well to the left of Labor and the Greens, not to mention the Liberals and Nationals. The opinion polls put public opposition to privatisation in the order of 70% to almost 90%, yet not not one amongst the Liberal Party, the National Party, the Labor Party or the Greens have ever put this policy to the voting public at any election in recent years as far as I am aware.[2] Of course his has not stopped governments of both major parties from embarking on privatisation fire sales following the elections.

I am not aware if public opinion polls have not been taken on other neo-liberal/Shock Doctrine policies such as deregulation, reduction of government services, the sell-off of public land, retrenchment of public servants, union-bashing, war, etc. but I have yet to see evidence that these policies enjoy any more public support than does privatisation. Certainly, if there was fair reporting of these issues, I believe the public would be no less opposed to all of these other facets of neo-liberalism than it is to privatisation.

So, given that the public is emphatically opposed to privatisation and most probably equally opposed to the other pro-corporate policies mentioned above, why have the supposedly left wing Greens Party failed again and again to effectively campaign against privatisation and neo-liberalism in general in any elections that I have observed in recent years, particularly in the 2009 and 2012 Queensland state elections?

[1] I have assumed that 'assendent' is a misspelling.

Thank you for pushing this matter. It deserves relentless exposure.

As you point out, the public was serially let down by its representatives on this matter.

It seems that they knew that they were doing wrong and that it was unpopular, but they pretended they would defend public ownership right up to the moment they welched on their promises to the electorate.

2. The Australian People demand the Implementation of Citizens’ Initiated Referendum and Voters' Right of Recall of parliamentarians and councillors, so we the people can directly propose the laws and get rid of unresponsive leaders.

3. The Australian People demand accountability for all politicians, and for all those who have failed and corrupted Australia, sold the country to foreign states and agencies, or devoted themselves to globalisation, or been citizens of foreign states while in office, we pledge to nationalize their personal property and deny them parliamentary pensions and benefits.

Voting for other than Australia First is just a waste of time.