These photographs are of horses at Barmah Vic, and Singleton NSW. As we are aware, they are not native to this country. They were introduced here by pioneers/settlers to help settle this land. They were carted off to war - 300,000 - never to return. They ploughed the fields and transported goods/settlers all over this country. They are used in entertainment, such as rodeos and racing, and even left to die in paddocks. At the end for many are the knackeries, some for overseas human consumption. Horses are not even recognised as “livestock” in Acts of parliament. What a bum deal these magnificent animals have endured from mankind. Now they are being slaughtered by this government, in the name of being ‘feral’ and destroying the land. (Photographs copyright Renee Neubaur. Sincere thanks from Candobetter for permission to use them.) 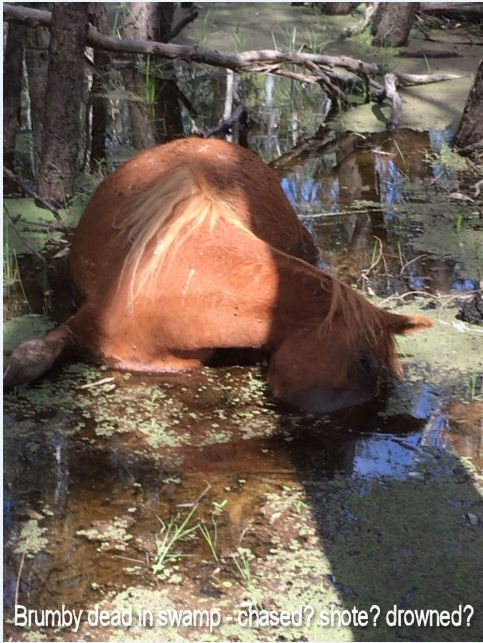 In my opinion the damage they do to the land is exaggerated. Pigs and other animals do more damage. The committee that are already looking after these horses are doing a magnificent job and I say that Parks Vic should include the local committee there to manage these horses. 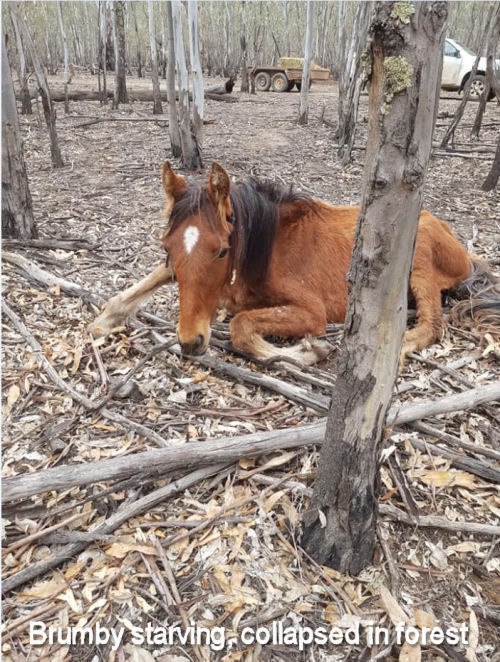 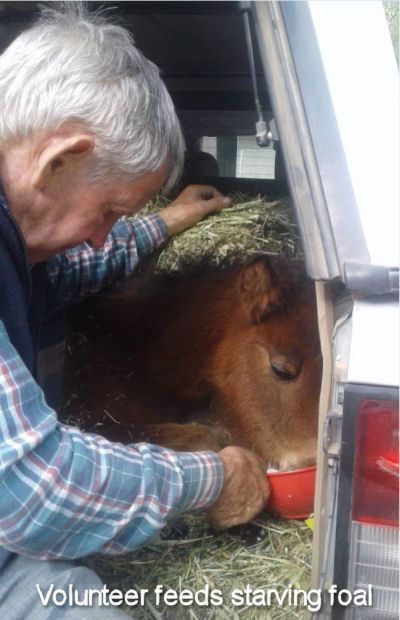 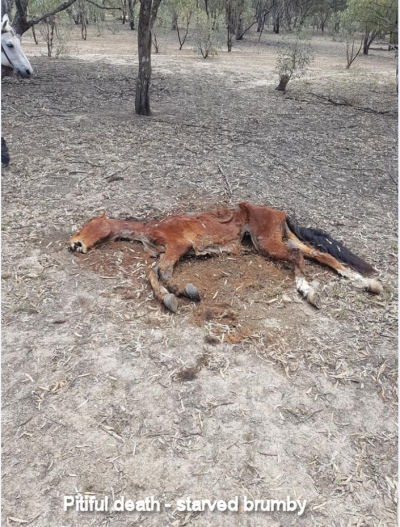 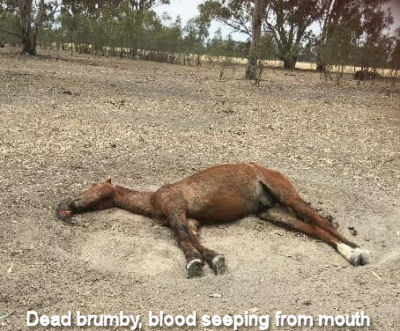 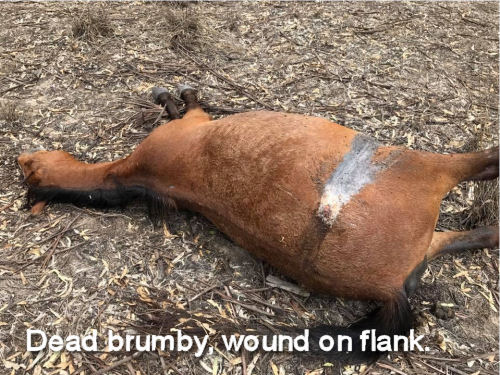 In Singleton (NSW) they were shot, destroyed, “culled,” killed, or whatever, from the air by helicopter. Our leading animal welfare organisation, the RSPCA agreed to all of this and called it “culling.” I call It murder.

There are other means of controlling the increasing population and for management of these horses. I think the people that have claimed “ownership and control” of this problem (Parks Victoria) have got it all wrong. They do not listen to the experienced hands-on experts that can help solve it.

Some ways to bring the population down that do not involve cruelty or culling:

- Keep herds intact so that stallions can limit who breeds, as they normally do. If you shoot them and the older mares and fragment the herd, the younger ones get to breed, increasing fertility.
- To encourage lower fertility in an intact herd, limit the brumbies' territory - probably by fencing. Ensure, however, that they have adequate territory to remain healthy.
- You can also geld all males.

All these things can be done by the self-elected custodians already there (the committee).

Regarding the brumbies at Parks Victoria at Barmah: The RSPCA is ‘advising’ on their condition, health and welfare, but it is only volunteers that are that are hands-on, keeping the animals fed. Many horse loving Victorians are donating.

These horses are starving, as you can see in the pictures, as Parks fines anyone who feeds animals. Some have suffered and died; some are still suffering - but a voluntary brigade is now feeding them. That is how the horses' lives are being prolonged, but it is costing volunteers thousands of dollars. Neither Parks Victoria nor the RSPCA help financially. They wait until the horses get to the body score of no return then shoot them. This is a cruel kind of neglect.

Parks Victoria have placed signs at the park entrances, warning that “feeding of animals in this park will incur penalties.” In itself this indicates that Parks Victoria are the custodians and/or persons in charge of these horses. Under the laws of the Prevention of Cruelty To Animals Act, (section 9 (f) ) they are therefore obliged to:

or be prosecuted by one of the two enforcement agencies privileged to enforce this act of parliament. These agencies are the RSPCA or the Department of Environment and Primary Industries, both of which are, at present, silently passing the buck! I have written to both agencies asking for their help but the response has been silence.

The RSPCA have a duty of care and must obey their own policies of the “five freedoms”[1] set out in their own charter, with a mandatory obligation to investigate and follow procedure’s under POCTAA (Prevention of Cruelty to Animals Act) to treat Parks Victoria as an alleged perpetrator for not following their duty of care as per the “Act”.

'Observing a forebearance' which allowed custodians to do nothing, was repealed a few years ago. Now anyone can be charged with an offence if they know that offence is being committed. No one person or government organisation is exempt from prosecution/investigation under POCTAA. Case law has now shown this in judgements/ prosecutions, such as Victorian Railways Board v. Snowball when RSPCA successfully prosecuted Railways Victoria for cruel transportation of horses. As the chief inspector/inspectorate coordinator for near two decades at RSPCAVic, I was there, in the court.

In essence the RSPCA must dissolve their MOU’s (memorandums of understanding) between other animal law enforcement agencies and abide by duty of care, for the sake of these horses - not “feral animals” but horses that were introduced by us in pioneering Australia.

The brumby control situation is at present itself out of control. The latest effort, in February 2019, occurred at the Singleton army base, a place with grasslands which horses have made their home. This control effort could have been described, in my opinion, as a killing field, where many horses were slaughtered by aerial shooting. In this awful way of “culling” animal herds, foals may be left behind and any injured horses will suffer. Singleton can only be described as the horse killing fields of Australia, and a blight on our “lucky” country. It has to stop now.

The cruelty and abuse of animals must be controlled ASAP and federal and/or state governments must support an independent office of animal welfare as, at present, the only agencies privileged to enforce this strong Act of Parliament are the RSPCA, which is a charitable society, DEDJTR (now divided into DJPR and DoT)[2] and VICPOL. The RSPCA has to rely on the sympathy of the commmunity and donations to generate their standing. This is unsatisfactory.

[1] “Our animal welfare philosophy is grounded in the belief that the welfare of an animal includes its physical and mental state and that good animal welfare implies both fitness and a sense of wellbeing. The RSPCA considers that an animal’s welfare should be considered in terms of five freedoms:
1. Freedom from Hunger and Thirst
2. Freedom from Discomfort
3. Freedom from Pain, Injury or Disease
4. Freedom to Express Normal Behaviour
5. Freedom from Fear and Distress.

Thank you for revealing this unconscionable cruelty to brumbies

Thank you Barrie for articulating and publishing a very worthy article that needs attention. We won’t rest will we?