Melbourne lord mayor Robert Doyle has called for an end to “dumb growth”, saying the Victorian capital needs to “stop spreading at the edges like some sort of stain”. The former Victorian opposition leader told a seminar on future visions for Melbourne that he was alarmed by new communities springing up in the outer suburbs, marooned from jobs and public transport.

Cr Doyle said the only “smart” way to achieve a “big Melbourne” was to inject new homes into established suburbs and the city's extensive urban renewal areas, such as E-Gate and Fisherman's Bend. He said the City of Melbourne believed an extra 3 million people could comfortably be housed within the current boundaries of the city. 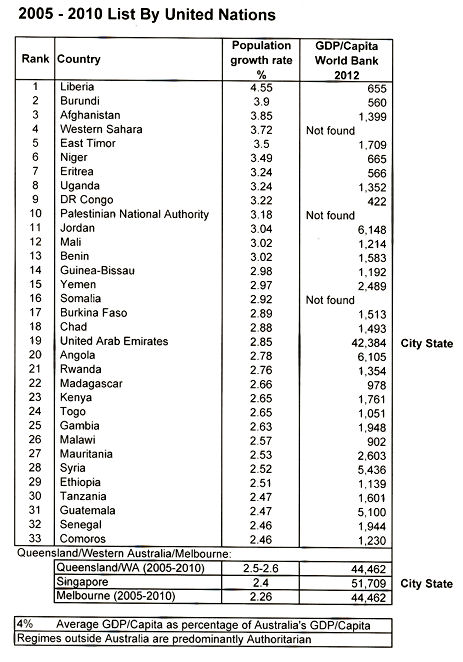 With the exception of Singapore and the UAE, which are wealthy City States with limited cost of infrastructure expansion; only Developing World states have higher rates of population growth than some parts of Australia. Hallmarks of such states include:

It doesn't take a lot of imagination to see some conceptual similarities between Australia and these states. It is all a matter of degree. A common factor, of course, being extreme population growth. Australia's is autocratically imposed on us all by the Federal Government. 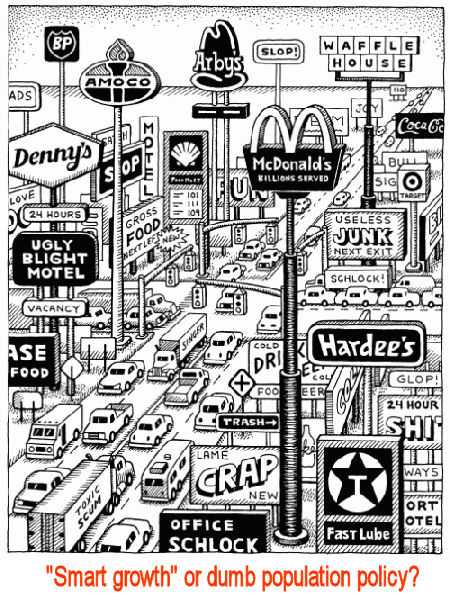 The Mayor doesn't control the rate of population growth. However limits to growth do exist. He says the "City of Melbourne" viewed an extra 3 million as feasible, but did not mention a time span; when the expansion would slow or stop; or who has the right to impose that kind of growth on Melbournians. That all seems to be part of the "Vision" which is accepted without question; like subservience to an autocratic rule by "High Priests of Growth". No worries mate; we can just keep building more housing, on less land,............forever. And if the building industry slows down we can get jobs digging holes, in Western Australia, Queensland and NSW.............forever.

In the long run, endless plans for massive population growth simply don't work. It's not sustainable. So why not admit it now and plan for slowing down?

Any form of rapid population growth, without questioning its long term feasibility, is "dumb growth", because it is a form of procrastination-in-denial. Ultimately the responsibility for change lies with the Federal Government.

Please review and consider signing this petition and forwarding it to as many people as possible: Australia requires a public inquiry to determine a basis for the optimum rate of population growth

There is ony one city in Europe more populous than Melbourne, London. The scandinavian countries which are highly regarded, have lower populations than Australia. The idea that Melbourne has to become big is a sick joke, laughable and silly, spoken by puling lackwits. How people don't laugh right at Doyle's face when he says that is beyond me. Melbourne is already bigger than many world class first word cities not just in size, but population. His statement isn't just poorly thought out, its absurd. It's like a 140kg man saying he needs to put on more weight. Another 3 million, thats an entire Berlin moving in. Are we going to gain a Berlins worth of culture, living standard, infrastructure and wealth? No.

"Australian governments need to come to terms with the prospect that no amount of increase in housing supply will meet demand if there is no limit to that demand." This is a great quote from an article by Kate Shaw, 'Housing blame game here to stay in world of infinite demand', 25 March 2014, 2.45pm AEST, Housing blame game here to stay in world of infinite demand. Kate says nothing that you couldn't read on candobetter.net seven years ago - "On housing affordability", but it is good that she is saying it, although now the horse has well and truly bolted, so perhaps it's no longer threatening to hear. Kate also compares the same damage in Vancouver, as Tim Murray often has on our pages here: Tim on Vancouver city planning and overpopulation. There are many other similar articles on candobetter.net: "Cost of housing and cost of dependency in Australia" and tags covering all aspects, such as this one: "Housing Affordability. The issue is self-government now, since clearly corporate interests have overtaken those of the state. I have yet to see anyone else blow the whistle on the relationship between successive federal governments and oppositions and some major corporations via the utterly benign-seeming The Australian Multicultural Foundation. But those connections have a lot to do with forced population growth and the constant propaganda we endure on the subject. It will be a red letter day when someone else investigates that mystery.

Torquay will bear the brunt of Melbourne's spreading sprawl

Spring Creek housing development at Torquay, on the Great Ocean Road Victoria, gets go-ahead from planning minister. Democracy isn't allowed to get in the way of property development! The Surf Coast Shire had written to Planning Minister Matthew Guy urging him to limit the town's boundary to Duffields Road, thereby protecting the Spring Creek area from development. But the minister has agreed with an independent panel, which found the area is the next logical extension to meet population growth. There's nothing "logical" about it! It's all about greed for growth, and promoting the housing industry! Our government is not "meeting" population growth, but encouraging and endorsing it! The more houses are built, the more people will come! There have been a number of community protests against the Spring Creek development but Mr Guy does not expect a community backlash. The public are being overwhelmed by the power of developers, strongly supported by our "planning" minister! The Mayor of the Surf Coast Shire, Rose Hodge, said the decision is disappointing. "This has been a difficult and complex issue, which has included extensive community involvement and strong views expressed," she said. "I know many people will be disappointed by the decision of the Planning Minister." There needs to be a diversity in Melbourne's economy, one that can survive any slowdowns and recessions. What we have now is a one-trick pony, property development based on the housing bubble. With jobs, infrastructure, public services, and amenities failing to keep abreast with growth, living standards and our economy can only decline. ABC: Spring Creek housing development gets the go ahead Matthew Guy is a front-man for the property developers' lobby group, moonlighting as our elected Planning Minister - however "planning" simply means giving ticks for new zones, and new housing schemes.