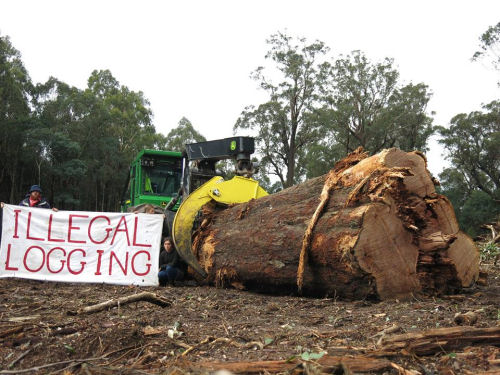 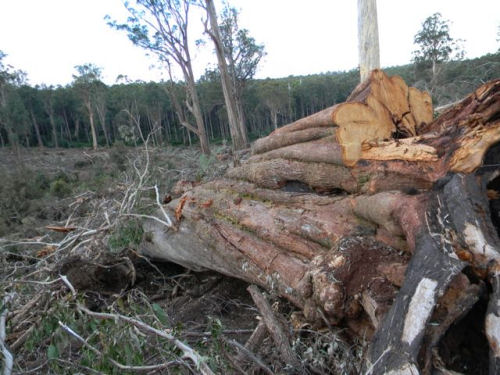 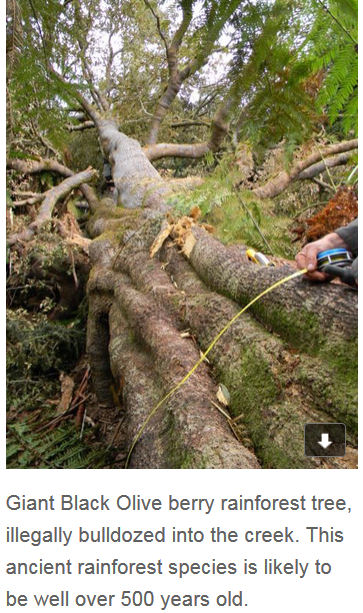 We expect governments to be responsible stewards of our environment, not be the wreckers! This corruption of values, and the desecration of such old growth heritage trees, is akin to blowing up a cathedral or a shrine! How are we to protect the natural heritage of our State if the vandals are in charge of selling the timber from these iconic forests that take centuries to grow? There's nothing "sustainable" about eco-terrorism, in the name of short-term cash flows.

VicForests is the face of government corruption and a service to protect high ranking fat cats, and is a destructive force now, and for future generations. As for "socio-economic" values, as of last year, the ten years it's been in existence, it has received $25million in grants and subsidies to help it haul $300million worth of free logs from public forest which it still owes Victorians $74million in unpaid dividends for.

"VicForests has controversially clearfelled and chipped at least 2/3rds of our forests to supply the export woodchip company at Eden. This will now see local sawmills suffer. Most Gippslanders though will celebrate the anticipated end to VicForests' reign in the east and an end to the decade of sending our rich forests into the woodchip pile and waste paper bin" said Jill Redwood on the 10 year anniversary last year.

VicForests – a decade of debt and destruction

The Government has been investigating claims the state-owned timber company illegally logged and destroyed ancient rainforest canopy species on the Errindura Plateau. The Goongerah Environment Centre alleged the state-owned timber company had logged about one hectare of rainforest on the Errindura Plateau. The group's spokesman, Ed Hill, said according to the Flora and Fauna Guarantee Act, any rainforest areas bigger than 0.1 of a hectare must be protected. It appeared to be bigger than .4 of a hectare. Goal-posts can easily be moved with State endorsement, and the FFG Act is mere paper, which no doubt is exempt from logging industries. The investigation found VicForests had not breached logging codes for rainforest protection and waterway harvesting. This is simply how VicForests operates! They are quite "legally" chopping up these massive and iconic trees, 600 years old. That's how VicForests operate - without scrutiny, without environmental limits and quite legally can vandalize our State's natural treasures. These "harvesters" are sanctioned by the fat-cats in Spring Street. ABC: Vicforests cleared over East Gippsland With State government sanction, nothing is "illegal" if it's done under the banner of VicForests - our own environmental vandals!!!

Message from Environment East Gippsland (http://www.eastgippsland.net.au/This is the latest:

The logging industry lobbyists have been telling everyone including politicians (they can be so naïve!) that tossing native forests into electricity furnaces is really ‘renewable energy’ because it would only be using the ‘waste’ – y’know – branches, leaves and those messy leftovers.

These claims were made 40 years ago to justify massive woodchipping of about 6 million tonnes a year, for decades. Untold deaths and horrific injuries of wildlife all being part of this.

Labor leader Bill Shorten will not be drawn on whether he will or won’t agree to this. Logging lobby group AFPA congratulated him. His environment minister, Mark Butler is saying ‘no way José. Is this playing good-cop bad-cop?

Join us to kill off this insane idea
What is needed is for Labor and the Independents to propose an amendment that defines ‘waste’, in such a way that it includes plantation and agricultural waste, even building waste, but clearly excludes native forest derived wood.
Unless this definition is unambiguously embedded in the RET legislation, it could raise its ugly head again as a regulation later down the track – and that could be worse.

Please – a couple of minutes of your day could make a lot of difference…
In order of importance, please call on Monday (it's more influential than emailing), the office of these politicians and leave a message for them.
And email or tweet them now…

Emphasise that it won’t be just off-cuts but will be whole logs ! It will also rob limited assistance for genuine renewables like solar.
Zhenya Wang
(02) 6277 3843,
[email protected] @SenatorZWang

Ask that he supports an amendment to the RET Bill that defines extcludes native forest material from the ‘waste’ category and that there are more jobs in genuine renewables.
Nick Xenophon
(08) 8232 1144
[email protected] @Nick_Xenophon

Emphasise that including biomass in the RET will rob valuable assistance/credits from the solar industry.
Glenn Lazarus
(07) 3001 8940
[email protected] @SenatorLazarus

Explain that including biomass in the RET will rob Renewable Energy Credits and assistance/investment in genuine renewable energy like solar.

EEG LEGAL CHALLENGE FOR THE OWLS -
This wednesday 20th, EEG will be in mediation with both DELWP and VicForests over their obligation to properly protect our threatened owls. We'll keep you posted on that as well.