How overpopulation destroys fine art, engagement and fun, in Australia

Overdevelopment and overpopulation in Australia wreck a lot of things, but some of you might not have thought about how they wreck art. The other day a very 'successful' Australian landscape artist, who sells his paintings for several thousand each, observed that thirty years ago he used to sell his paintings for an average of $3000 each and he still does. "Problem is," he observed, "My house, which cost $60,000 then, is now worth close to a million. Paintings have not gone up. What does it mean? It means that, where I used to make a comfortable living from my paintings, I'm now obliged to run classes in my garage, and it's increasingly difficult to make ends meet. "

The massive rise in the percentage taken from sales by art galleries is a reflection of the rise in the cost of land, which is a reflection of demand. For the last three decades, demand has been artificially inflated by Australian governments via massive population growth engineering. Renting or owning a shop costs far more than it did 30 years ago, much more than it did 50 years ago.

There are other problems associated with population growth. Try finding a quiet place to do a landscape! Try to find a natural landscape! 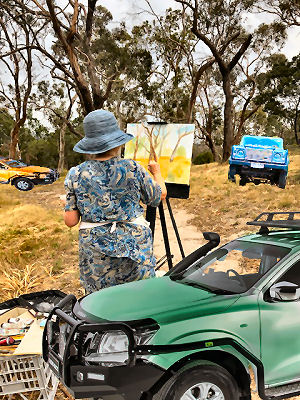 Recently a friend and I set up our easles at the top of a hill in a small patch of unfenced bushland by the side of a road in Mt Eliza. It wasn't an optimal subject, but beggars cannot be choosers. After about an hour and a half, my companion observed crossly, "Look some buggers are driving 4WDs right in front of us!" She was expostulating further, but stopped spluttering as one of them got out of his car and walked over to us. Showing no interest in our painting or compassion for our subject, he said, "Sorry ladies, the gentleman who owns this property wants to mow it, and you're in the way."

And then there was the fiasco when we went to paint from the foot of the cliffs around from the dog-beach next to Safety Beach, Mount Martha. It was a Monday, so sure to be quiet. It was a dog-beach, so any activities there were would be low key. Heavily burdened with equipment, we picked our way painfully and perilously across a jagged granodiorite shelf beneath the cliffs, to take advantage of two hours of low tide.

The people and dogs on the beach were not a problem, but the beach is next door to a marina that property developers recently carved out brutally to create a canal-estate out of a pleasant natural area. As we set up our easles in a near-blinding haze of glaring sun and reflections, the sea erupted with noisy jet-skis, and motorised yachts, some the size of small ships. They came out of the marina entrance, like a plague of loud and smelly motorised locusts, did a right turn, putted, revved and snorted a few hundred meters, then threw their anchors down just off-shore from us. Inflated reddened human bodies, splashing and oafishly calling to each other, filled the potentially peaceful scene, thirty meters from the shelf we stood on.

I had forgotten that it was Australia day in 2019, no doubt quite a different phenomenon, in terms of traffic and natural surroundings, from the first such celebration on 26 January in 1808.

Overpopulation has added to the plein-air painter's endemic problems of mosquitoes, sunburn, and sunstroke. Population growth forces artists to go further and further out or to settle for mutilated landscapes with vaguely natural narrow views between housing estates. Eventually, as you go further out, you come up against suspicious farmers, wondering if you are cattle rustlers.

There is actually almost no natural commons left. You can't just pitch a tent on a hill with a great view. It's all fenced. If the farmers don't shoot you, the cars will get you and your easle on the roadside, by pollution or collision.

Bird-hides in wetlands offer unusual comfort, with squared off viewing spaces, tables and seating. The shelves for binoculars adapt well as places to rest pallets, turps containers and paint-tubes. The problem is that wetlands, once part of more varied surrounds, now usually consist of small reedy spaces of desolate flatness surrounded by housing estates. It is difficult to make something out of this. Despite the protection from the sun, the rain and the wind, wetlands-painting from bird-hides offers thin rewards. We recently went to Edithvale wetlands, in part to find a migratory bird for an ecological project. We were there for four hours. It was hard to leave, due to the unaccustomed comfort. During those hours the hide was visited by three busloads of people and we gave directions to many visitors about where to find the toilets. One man complained that he had responded to advertising about Edithvale's wonderful wetland, but there was nothing to see for his busload of very elderly people. It is true that we only saw a few moorhens among the reeds and a couple of pigeons in a tree that day. Where was the restaurant, he wanted to know, and the toilets, of course.

National Parks and other Reserves

Unless you are able to spend days hiking into the reserve wilderness (where you are no longer allowed to pitch a tent), you are stuck with the average viewpoint close to the entrance (painted many times before) where it is hard to relax, due to international busloads. And you can't take your dogs anymore for a lovely companionable exploration. On the surface, it seems reasonable to ban dogs from natural reserves, but I cannot help thinking that all the people who used to walk with their dogs in national parks, have been replaced by busloads of overseas tourists, who have no deep knowledge or attachment to these spaces. There are not many spaces I can take my dogs and paint because, as I have said, there are not many natural spaces between agricultural land and sprawling suburbs. The dogs rightly expect to accompany me on walks, so I have to ration their walks to accommodate my paintings. This was not a problem when we were a much smaller population. Aboriginals had at least 60,000 wonderful years before overpopulation and development came to destroy these shores. Namatjira would have to go a long way out into the desert these days to find a scene without a tourist bus.

Artists are, of course all different in their sources of inspiration and their points of interest but I think few would not be energised by a natural landscape and some uninterrupted peace, whether they choose to depict it or not. Some artists use the urban environment in their work maybe to draw attention to its intrusiveness. A classic example is Jeffrey Smart who makes much of buildings, motorways , train carriages , containers dominating his canvasses in bright pure colours. Is he saying "these things are taking over!"? Rick Amor is another, who incorporates the built -up environment into natural spaces . He actually seems to be drawn to the introduced aspects of the Australian landscape with his well known use of the iconic cypresses on the Mornington Peninsular. These trees used to seem eerie to me when I was a child yet are compelling and fascinating in Amor's work. Young artist, Harley Manifold, as well as painting pure landscape also draws on the most unlikely subjects, the sorts of glimpses you get whilst travelling 100kms/hr on one of the state highways in Victoria or a momentary exchange seen from a car or passing by on foot. His reminds me of the work of Edward Hopper who tried to get out there in the country in his car on weekends and would manage to get a "gas" station into the picture. I see a certain sadness in what Amor and Manifold show in their work. Likewise a sort of loneliness in some of Jeffrey Smart's work. The Cahill Expressway painting , devoid of nature except for the sky with one lost figure to the side, dwarfed by what is now called "infrastructure". My impression is not that these artists see the dominance of man- made things in the environment as beautiful but that they are challenged by them and rising to the challenge. each in their own way.

Interest rates (cash rate) are at an all time low of 1.5% and are forecast likely to drop. This is proof the economy is in a very bad state. Having high migration at this point is madness and an attack upon the working people of Australia.

When Countries are hit by economic crisis’s some workers go to other countries looking for jobs. This shows the lie that migration stimulates economies. All the richest countries have small increases in population. In some African countries they have a 4% annual increase in population which causes their economies to head towards collapse.

The stagnation of wage growth can be attributed to excessive migration policies. Employers are not having to pay good wages for good workers.

The banks have recklessly made loans until our level of debt to the retail banks is around 180% of GDP, strangling the economy. If there was any good times it is coming to an end.

The concept of a rapidly growing population being a bad thing for the workers was first outlined by Thomas Malthus in 1798. Then it was reiterated by Karl Marx 150 years later. More recently historians looking at the effects of the Bubonic plague in 1347 where population was reduced by around 50%, saw that rather than society collapsing, the peasants could demand higher wages - much to the disgust of the then ruling class.

Population growth by migration has more of an effect upon the working class. White collar workers have mechanisms that exclude migrants from taking their jobs such as professional associations doing all they can to not recognise migrants qualifications. The other thing is just not employing migrants.

More often than not migrants and refugees are conflated. Both sides of the political spectrum mix both up for their own purposes, so as at times people don’t know the difference.

It is concerning about the number of refugees in the world today but there is little criticism of the politicians sending our defence forces around the world to engage in conflicts creating more of them. The resultant psychological effects on our service personnel of course never rates a mention!

Another cause of refugees is the IMF imposing free market policies on third world countries. There has been data around for 20 years that these actions destroy economies and even worse they lead to a fall into civil war.

Looking at countries on a GDP/capita basis, the 18 top countries have small populations of under 8 million. On comparing the 2 largest countries, India and China, the one with the smaller population growth, China, has nearly 5 times the wealth.

One of the most compelling arguments for curtailing migration is the onset of automation of work, now and in the future. Predictions that in the future automation will take up to 50% of the jobs seem a bit over the top, but with current unemployment, under employment and the working poor, it seems an absurdity and foolish to push high migration.

Skills shortage is also a stated reason for migration, yet it hasn’t been a problem for the last 200 years. One of the strongest reasons to limit migration are environmental concerns which whilst not in the scope of this discussion, are acknowledged as essential to ensure for future generations.

Migration is an attack upon the working people of Australia.
Migration is now well past use by date for Australia - It all must end!
AUSTRALIA FIRST PARTY
www.australiafirsparty.net [email protected] National Contact Line 02 8587 0014
If you don't fight - you lose: Join the Australia First Movement