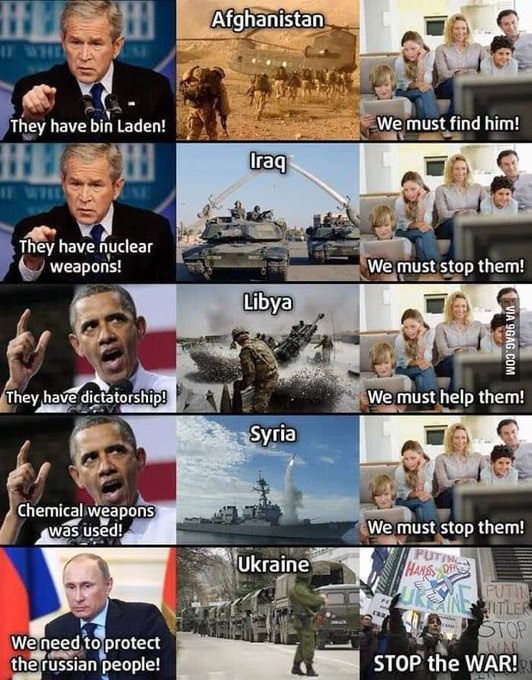 What is your plan for getting

What is your plan for getting the Russian death squads out of Ukraine? If Ukraine falls, will Moldova be next? Are the Baltic States safe?

The only death sqauds in Ukraine are those fighting on behalf of the Kiev regime which was imposed upon Ukraine by the Maidan coup of February 2014. Those death squads are comprised of neo-nazis who openly worship Stepan Bandera, the infamous Ukrainian who collaborated with the occupying Nazi Germans in the Second World War against Jews, Poles, Russians and other ethnic minorities within Ukraine. According to Wikipedia, between 1.2 million and 1.6 million were murdered by those collaborators over that period of time. The most notorious incident was at Babi Yar from 29 September until 30 September 1941.

Given that a number of political opponents of President Zelensky have been murdered by his death sqauds and that all independent TV channels have been closed and given the proliferation of US-operated bio-warfare laboratories on Ukrainian soil, what sane and decent Ukrainian would not see the Russian military operation as, at worst, an evil far less than the continued rule of Zelensky?. (Incidentally, Zelensky, just like the former president Poroshenko before him in 2014, stood as the peace candidate in the 2019 elections and won an overwhelming 70% of the vote.)

Most, if not all, of the accusations made by the corporate newsmedia against Russia arising from its Special Military Operation in Ukraine, launched on 24 February, were put to Russian Foreign Minister Sergei Lavrov in a recent 56 minute interview by Geeta Mohan, Foreign Affairs Editor of India Today. I think you will find that all of those accusations were rebutted.

The Interview was originally posted to YouTube, but is now on Facebook. I have embedded that interview here:

I did attempt to an extensive

I did attempt to an extensive rebuttal of your faithful recitation of Kremlin propaganda but your auto mod settings were twice tripped. Oh well.

Try leaving out URLs when you make your answer or substitute the word 'dot' for actual dots in URLs. We do not approach our articles with view to justifying Russia's actions,but we do see this as a NATO conflict, carried out in Ukraine, and we publish what seems logical.

Why not allow URLs? Why

Why not allow URLs? Why suppress links that may not align with your anti-Ukrainian narrative?

You can post a URL if you give your email address and we make you a contributor, but you don't give your email address. If we allow URLs from quasi-anonymous sources, we will get a ton of spam and have to spend hours a week culling it.  It can also provide a way in for hackers. (See https://blog.knowbe4.com/top-12-most-common-rogue-url-tricks) We used to allow URLs and that was our experience. In our most recent update, we were advised to stop allowing them. But I agree with you, it is a pain. We will review the policy. In the meantime, how about just putting 'dot' in instead of .?  Or paste the name of an article and the publication, if that is appropriate, then people can look for it on the internet. Given that we have lots of exposure here to US, UK, and other Anglosphere and also French mass media, I doubt you will come up with anything we haven't already heard about, but have a go.  :-) We aren't suppressing the western mass media stuff. It floods the world and everything else is hard to find. Candobetter dot net reflects a perspective that is rare as hens' teeth in the Anglosphere.

From what I have seen, you faithfully and uncritically recite Kremlin propaganda and publish obviously false narratives, for instance the false claim that the US was silly enough to have bioweapon labs  in (corrupt and unstable) Ukraine, a country always at  risk of Russian invasion.  On the other hand, you studiously and deliberately ignore the independent Russian journalists who risk being poisoned, jailed, killed and tortured to push back against the Kremlin narrative and tell the truth.

I can't work out what the purpose of this blog is, other than to push the agenda of extreme nationalists and fascists like, Putin and Marine Le Pen, in order to ensure Europe is ripe for World War 3.  Strangely, while engaging in rampant war mongering, you claim to want peace. Interestingly, your rhetoric is almost a carbon copy of that used by the Third Reich on the eve of World War 2.

By the way, if I want to know the Russian persective,  Russia Today and so on can be accessed in 2 seconds, even though YouTube has (rightfully in my view) given these outlets the flick. Interestingly, Russian state propaganda made for the local consumption is now trying to justify Russian first nuclear strikes against western Europe. Any thoughts on that?

Tell us where all this Russian propaganda is, Robert

You say, "Russian propaganda is everywhere," then only mention RT, which, as you say, is no longer available on youtube. In fact, it has been banned and destroyed in the UK, the US, France, Germany and Australia.  However, there is actually very little from Russia in Australia or elsewhere in the Anglosphere, so please tell us where you find it. Whilst you may be able to access RT, most people cannot and do not even know it exists. Furthermore, they have no idea whatsoever about the situation from Russia's point of view.

You already know the answer, Sheila

Hi Sheila. I think you know perfectly well that Russia uses various tactics to disseminate its propaganda, such as troll factories. The same technique is done for Russian speaking audiences. Fortunately much Kremlin propaganda is clumsy, such as literally hundreds of Russian  TikTok influencers using identical scripts as shown here:   wwwDOTviceDOTcom/en/article/epxken/russian-tiktok-influencers-paid-propaganda