Julian Assange has been imprisoned through barbaric abuse by powerful people of their positions in government and the law, and through the almost total disorganisation of ordinary people. People's ability to defend themselves at law and find crowd support in England nearly 400 years ago was often more sophisticated and engaged than our own.  A famous case was when, in May 1649, Cromwell arraigned John Lilburne for high treason and incitement of Leveller mutinies in the New Model army. Lilburne managed his own defense, using the “Edward Coke interpretation” of the Magna Carta, as requiring that a man be tried by his peers. Against the instructions of the judge, Lilburne’s peers refused to convict him. This was magnificently ironic, because Cromwell’s parliament had provided a precedent only months before, in the trial of King Charles I.  Charles I’s lawyers had argued that the King could not be tried, because he had no peers. In January 1649, however, Cromwell’s Puritans had assembled a jury of 120 of the highest officials they could get, and found the King guilty of tyranny - and executed him. Isn't it strange that Julian Assange has been held against his will on the advice of a mere magistrate? It is time Australians, British and Americans demanded these rights for Assange.  John Wilson in Sydney has long campaigned for Australians to exercise their rights at common law, notably trial by jury.  This is not something that lawyers, who depend on the system, are going to do for the rest of us.  Wilson quotes Edward Coke in this video, "John Wilson on Common Law." https://youtu.be/ndUq81WbAHc. 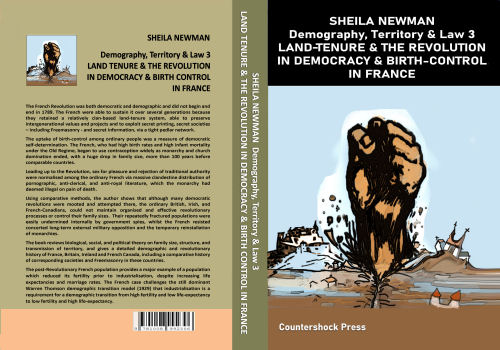 The text of this article is an extract from my upcoming book about all the movements that attempted democratic revolutions in Britain and Ireland, and why the French succeeded and the British did not. The book is Sheila Newman, Demography, Territory & Law 3: Land-tenure & the Revolution in Democracy and Birth-Control in France, Countershock Press.

The term “Levellers” was coined during the Midlands riots against enclosures in 1607.  “Levelling” referred to the wish to get rid of hedges dividing fields. The riots involved about a thousand people and around 50 died fighting, including their leader, a tinker called ‘Captain Pouch’ or John Reynolds.

During the English Civil Wars, in July 1646, a remarkable man called John Lilburne was tried under King James’ Star Chamber and locked in the Tower of London, for calling his former commander, the Earl of Manchester, a traitor and royalist sympathiser.  A campaign to free Lilburne gave rise to a political party called The Levellers. Organised nationally, it had offices in several London inns and taverns, and members identified themselves by wearing rosemary sprigs in their hats. These Levellers published The Moderate newspaper between July 1648 and September 1649, and led in the political use of petitions and pamphlets. After Charles I’s execution, the Levellers and other opposition groups were marginalised, as Cromwell and his relatives dominated parliament, with the Grandees (anti-Levellers) dominating the Army (where Levellers had been very active). After 1650 the Levellers seemed no longer a threat to established values.[1]

The Levellers were mostly small property owners, who supported Cromwell and Parliament against the monarchy.

What made them distinctive was their demand that Parliament itself be drastically reformed to represent the people quite independently of property…. They argued for full male suffrage, excluding servants and beggars, but full civil rights for all, including women.[2]

The new movement of the Levellers had become very prominent in the New Model Army [3] and had formed a faction which sought to motivate the army to embrace their goals for Parliament.  Negotiations in the form of the ‘Putney Debates’ had begun on 20 October 1647 but ended when Charles I escaped his Hampton Court prison on 11 November 1647. On 15 November the army called further attempts at negotiation ‘mutinies.’ Soldier supporters were intimidated, and 11 ‘mutineers’ were court-martialled and sentenced to death.  All but one of those sentences were commuted, after lots were drawn as to who would die. The survivors were probably tortured, then cashiered out of the army.[4]

Blaming soldier revolts on the Levellers in the New Model Army, in May 1649, Cromwell arraigned John Lilburne for high treason and incitement of leveller mutinies. At his trial in October 1649, Lilburne managed his own inspired defense, using the “Edward Coke interpretation” of the Magna Carta, as requiring that a man be tried by his peers. Against the instructions of the judge, Lilburne’s peers refused to convict him. This was magnificently ironic, because Cromwell’s parliament had provided a precedent only months before, in the trial of King Charles I.  Charles I’s lawyers had argued that the King could not be tried, because he had no peers. In January 1649, however, Cromwell’s Puritans had assembled a jury of 120 of the highest officials they could get, and found the King guilty of tyranny.[5]

The New Model Army was the first army legislated in the feudal system without belonging to the King. This army belonged to Parliament. It is thus sometimes called the ‘first mass, democratic army.’[6]

Soldiers under Cromwell’s command saw the banner they fought under in a variety of ways.  In the end it was the interpretation of the people who controlled the army that won.  Cromwell was a member of the new ruling classes and his paradigm of representation did not extend to universal suffrage or restoration of land-rights.

[…] the New Model Army was divided on the question of what form of government England should have. On one side, stood Cromwell, Ireton and the officers, and on the other, the common soldiers. In August 1647, Ireton drew up the "Heads of Proposals," a document that retained a government by kings and the two Houses of Parliament. The militia would be controlled by the Lower House. The soldiers responded with "The Agreement of the People," which specified manhood suffrage, equal electoral divisions, biennial Parliaments, and freedom of religion and equality before the law.[7]

Cromwell's background helps to explain why he was opposed to the "leveling" movements within the Puritan Revolution itself. He worked to support authority and property and believed that class distinctions were the cornerstone of society. […] Contemporaries and later critics saw Cromwell as a hypocrite. However, he sincerely believed that God had chosen him to lead His people and he attributed his military victories to God rather than to his own strategy and tactic.[8]

Cromwell’s attitude to democracy and to the Levellers has been compared to that of Calvin in Germany, whose concepts of Christian freedom inspired German peasants to demand the abolition of serfdom, unless it could be justified by the gospel.  Calvin sided with the oppressors when the fighting got dirty, calling on nobles to "knock down, strangle, and stab ... and think nothing so venomous, pernicious, or Satanic as an insurgent." About 100,000 German peasants lost their lives in this struggle.[9]

[3] Of Cromwell’s New Model Army: “Most importantly service in parliament's army had brought a creative politicisation. As the soldiers declared in a famous declaration of June 1647: 'we were not a mere mercenary army, hired to serve any arbitrary power of a state, but called forth and conjured, by the several Declarations of Parliament, to the defence of our own and the people's just rights, and liberties'. Political and religious debate under 'praying and preaching Captains' had produced a citizens' army, dedicated to the Lord's cause.” Source: Hughes, Ann, “The Execution of Charles I,” BBC History, https://www.bbc.co.uk/history/british/civil_war_revolution/charlesi_execution_01.shtml

[5] See Robertson, Geoffrey, “Magna Carta and jury trial, Magna Carta today,” 13 March 2015, https://www.bl.uk/magna-carta/articles/magna-carta-and-jury-trial. This legal history article gives the origins of the rights to trial by jury of one’s peers in the Magna Carta and the history of various kings’ attitudes to this, notably King James I and Charles I. In 1637, John Lilburn had been tried and imprisoned by King James’ Court of Star Chamber, which did not allowed a jury of peers, but how he managed to obtain a jury trial  when tried under Cromwell’s regime, using the same justification Cromwell had used to try Charles I, who had claimed to have no peers.

[6] “…the Puritan Revolution was a bold movement in European history. The major weapon was the New Model Army, the first mass, democratic army. To fight Charles I, Parliament needed its own army and so the New Model Army marked a break in tradition linking the English crown with the army.” Kreis, Steven, “Lecture 7: The English Civil War,” in The History Guide, Lectures on Early Modern European History, 2002. http://www.historyguide.org/earlymod/lecture7c.html

[9] Encyclopedia Brittanica, “Against the Murderous and Robbing Hordes of the Peasants, work by Luther.”

A talk by Dr John Wilson, BDS (Sydney), author of
“Jackals of Slavery and how to defeat them” at the Club Parramatta,

This land is our land. We the People, who call Australia home, are a sovereign,
independent and self-governing nation from Broome to Brisbane and from
Darwin to Tasmania. This is our country and our culture of equality and
friendship. We will not be slaves again. Awaken your best. So help me God.