Normalising endless immigration and coupling it to nuclear power in Oz

On the Jon Faine program, Radio ABC, Melbourne, 3 September, 2009, people were invited to phone in with questions. A caller, Ron from Box Hill, asked Rudd to house the homeless and balance the budget, not to waste money on the new broadband network, and to “immediately stop immigration”. (Perhaps the caller was responding to the grueling exposure of homelessness in Australia on the Four Corners program, "Heartbreak Hotel") where many forum participants linked homelessness to the greed of developers for immigrants.

Faine ran through the caller's points one by one to prompt Rudd's answers.

I have noticed a flood of this kind of talk since Kelvin Thomson 'came out' scientifically criticising continuous population growth and I assume that it is the way the media intend to deal with immigration on behalf of the government and vice versa.

A Bernard Salt article in the Australian,"Where to put the extra millions at the end of the 21st century?" (September 10, 2009) comes out with some incredible assumptions/dictates:

"And that's the issue. Australia will be an immigrant nation for our lifetime and for the lifetime of our grandchildren."

"But what of the next stage of urban growth beyond five million to six then seven million? Melbourne and Sydney jointly contain 14 million residents of Australia's 35 million.Does this mean Sydney and Melbourne will account for 24 million if Australia reaches 62 million then? Is this possible? "

"There is the very real prospect that urban planners will have to manage the development of three Australian mega-regions (Sydney, Melbourne, southeast Queensland) each rising to between five and seven million by century's end."

"I simply do not see the range of solutions being offered as sufficiently robust to accommodate the scale of growth Australia must accommodate this century."

And, of course, all this tyrannically planned, assumed and imposed growth, is a means to an end: it justifies a nuclear economy. Never mind that we will not be able to afford one and the problems of uranium supply are huge and the success of thorium and breeder reactors cannot be guaranteed; the growth lobby, notably the developers and the mines will make money out of our destitution as long as they can talk Australian governments into underwriting the technology and the infrastructure for the big cities they plan around nuclear reactors.[4]

I wonder now how all those in the Australian Conservation Foundation who pitilessly militated against any effective expression of disapproval at high immigration feel now to realise that, if Penny Wong pretends to 'de-link' population growth from carbon emissions, everyone else is busy coupling high immigration to nuclear power.

Freddy the blind environmentalist could see this coming.

Ziggy Switkowski [1] and Bernard Salt [2] are making clear noises about nuclear; the "Climate Institute" (a P.R. blog) and Frank Lowey's Institute of International Affairs will find excuses for it [3] and Penny Wong's 'de-linking' will probably be predicated on it.

Salt flags housing behemoth populations with growth economies in continuous sprawls all over our most fertile coasts and hinterlands, suggesting that our major cities will not be able to contain such human explosions.

"Although I suppose there is the option of enforcing compliance to urban consolidation laws using a special squad of enforcers."

There you have our predicament in a nutshell. We kid ourselves if we think that, in the eyes of Obama, Rudd, et al, Australia is any different from Chile or Argentina. (See Shock Doctrine articles.)

Press serves up Rudd with G20 and plenty of whipped cream

Page 2-3 of the Financial Review, 26-27 September, mercilessly flatters the bumbling Rudd, as though he were a two year old promoted from a high chair: "Australia has won a seat at the table of what will become the world's new peak economic decision-making body in the biggest shift in global financial architectures since the end of World War II." See also the Perspective insert, pp. 19-21 in the same Fin Review. 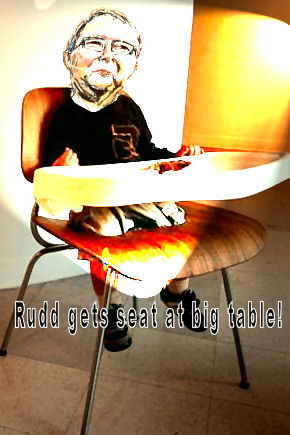 To me that's an indication that none of our policy will be made at home or democratically; we are simply to be further co-opted as a corporate colony.

If it all goes smoothly for those who, with the help of the media, have captured the helm of this country.

[2] "Demographer", Bernard Salt has been marketing population growth and housing developments for many years now, as a partner with the international accounting firm, KPMG, and you would think that he would have warned us of the consequences before they might lend themselves to the hyperbole of 'inevitable' if he were truly concerned about public welfare or democracy.

KPMG, which Steve Bracks (ex-Premier of Victoria) went to work for in Timor, has been linked to pernicious international interference in Iraq along with a number of other big corporations:

"Michael Fleisher, the founder of the Chicago School based Shock Doctrine, [said in 2003 of Iraq that] ‘protected businesses never, never become competitive’. “He appeared to be impervious to the irony that Halliburton, Bechtel, Parsons, KPMG, RTI, Blackwater and all the other US corporations that were in Iraq to take advantage of the reconstruction were part of a vast protectionist racket whereby the US government had created their markets with war, barred their competitors from even entering the race, then paid them to do the work, while guaranteeing them a profit to boot – all at taxpayer expense." Naomi Klein, The Shock Doctrine p.355.

[3] Lowy is a developer who has used the issue of climate change to launch certain opinions on many different political and development issues. As an Australian developer, not surprisingly, he wants to see our population keep on growing. The argument that we will need nuclear power to support such growth then comes naturally. See, for instance, http://www.lowyinstitute.org/Publication.asp?pid=786 and do a search for 'nuclear' on the Lowy site.

Humans must decide to act morally to save the planet

Normally species reproduce until they run out of natural resources and with competition with other species, they stop growing. Humans don't have natural predators, and we are on top of the food chain. We, supposedly, are the most intelligent of all other species, and naturally superior. These rights though bring enormous responsibilities. WE must decide act morally and ethically to not over-ride the planet and steal from future generations and other species.

I pricked up- my ears a couple of years ago when then Prime Minister (in case anyone's forgotten him ) John Howard started making nuclear noises under a smokescreen of concern about climate change and greenhouse gas emissions. Instead of the obvious measure to take with regard to this- i.e reduce consumption and human population growth to reduce impact- the "solution" is yet another industry -nuclear. Howard was the vanguard.