Why do we tolerate it?

Why do politicians, as soon as they taste power, think they have rights akin to the kings of old, to splurge on personal fettishes and pet hobbies using taxpayers' money and abuse the rights of local citizens?

Accompanied by a howl of boos from a small group of protesters, Rees overruled Homebush locals concerns about the required removal of 700 trees, significant noise and air pollution impacts, contamination of parklands waterways & habitat (including Green & Golden Bell Frog habitat) from fuel & oil spills, disturbance to native fauna from noise impacts & crowd movements and the unfair impost on local urban amenity & public open space. Our naive Nathan has been sold on hollow promises of "attracting 15,000 visitors and attracting $100 million to a desperate NSW economy. So desperate and naiive Nathan has grabbed the hype to get quick political wins. It is these 'quick political wins' that have shaped his tenure and that will shape his legacy. Long term State investment, that is investment beyond the next election cycle is not a mandate the NSW Labor Party has granted him.
SOURCE: http://www.tec.org.au/index.php?Itemid=291&id=693&option=com_content&task=view

The motor racing event is being promoted by Events NSW (an arm of the Rees NSW Government) and is set to be an annual event every December. The main sponsor is Telstra, which at the same time hypocritically declares on its corporate website that its "concern for the community and resolve to address environmental issues will only serve to improve Telstra's future."

Then we see another motor racing event for NSW, the Repco Rally, relocated from where is has been staged for two decades outside Perth to the NSW in the Tweed and Kyogle shires in September. It is set to be staged every two years at least until 2017. Of course Rees has given it his red hot support and again his Events NSW is plugging it hard.
svc104.wic466d.server-web.com/images/tweed/CAMS_MediaAnnouncement.pdf

Again, NSW taxpayers are paying up to $8 million to the rally organizers and the Tweed Shire Council has promised to fund the rally organisers an extra $120,000 every two years out of local rates revenue. This funding comes at a time when the Rees government says it can't afford to provide adequate local policing or health services to the people of the Tweed Shire. 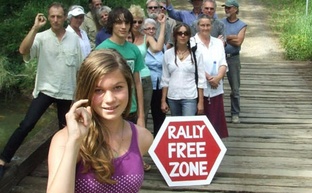 Many locals at both events have strongly and unanimously voiced their objections to these events respectively, but 'king' Rees likes his car racing and has proclaimed it's all going ahead. It's not too dissimilar to the English aristocracy of old pursuing fox hunts through farmers properties, thumbing their noses at the locals. Auburn, Parramatta and Ryde Councils all unanimously passed resolutions opposing the proposed V8 Supercar race at Homebush.

Both races will mean senseless environmental vandalism and are a blatant denial of local communities of their Common Law rights to quiet enjoyment and amenity. If the history of both races is any guide, Rees' red hot go at promoting his car racing fetish is set to cost NSW more than the exaggerated hype of making money for NSW.

At a time when peak oil has been and gone and the motor car industry is in decline, Rees' petrol head fetish can only be a selfish desire and an abuse of privilege and power to doggedly pursue an unsustainable 20th century motor racing culture. This is set to be Rees' legacy of his red hot term in power.

Rees fetish for V8s should be tempered. The V8 race could more suitably staged at the existing dedicated motor racing circuit just down the road at Eastern Creek. Rees' fetish for rally driving could be fed by him flying over to Perth where it used to be staged.

Petrol head Nathan Rees was behind the Repco Rally and sorted political legislation to make it happen, same with V8 Supercars ripping through Homebush. So somehow I expected to see him supporting the forth Mad Max film being announced today for New South Wales. The original Mad Max was screened back in 1979. As Rees sees it - simple - more jobs for mechanics, spray painters nd tourism - jobs, jobs, jobs. But film making is a one off. So like mining companies than come and go sacking workers as hey move on so will this film. Boom and bust mentality perpetuates like the 19th Century gold rush. Now there digging up the 1970s for a remake. It's like Bowie's Life on Mars remastered. But I wish "Fury Road" every success for Australia's struggling film industry, although can't we find a new subject? How about a file called 'Franklin' with Australia's best actors and emerging actors retelling the iconic environmental and social battle of Australia's recent history? It would be new, fresh and topical. Anyway, may be Mel s Max 4 may wish to do a Silvester Stalone come back. The NSW Film & Television Office is now part of Rees mega department Industry & Investment NSW. It all sounds energetic, but can someone name just one project out of it that is fully funded, approved and underway with a 5 year life or longer let alone beyond the NSW election cycle. Nathan relishes any business announcement especially one that involves cars. Pity Bridgestone has suddenly announced closing up shop in South Australia with no thought to redeploying its 600 Australian employees. Executive director of the Australian Institute for Social Research, Associate Professor John Spoehr, says ""We know from the past that around about one-third of manufacturing workers that lose their jobs during downturns go on to be long-term unemployed." [SOURCE: http://www.abc.net.au/news/stories/2009/10/24/2723176.htm] The writing is on the wall for the automotive industry in Australia, but some petrol heads just can't give up the addiction and keep tuning into Top Gear 'to keep the dream alive'. Rees says 'keep it simple stupid'! Well simple ideas for simple minds as other say. NSW has become the meat head state! May be I should change my number plate.