Parks and Conservation Service Manager Daniel Iglesias says up to 3427 kangaroos will be "culled" in the ACT.  It's really no more than like pulling out a few errand weeds, and it's for their own benefit!

Ostensibly it is to maintain populations to appropriate levels to protect the integrity of ecosystems, several of which contain endangered flora and fauna.  It's no more than a matter of thinning out some of those nuisance and feral kangaroos to allow genuine natural ecosystems and native species to flourish, and of course a government department will want to be seen protecting endangered flora and fauna!    It's also so the grasslands are not overgrazed, and thus provide habitat for ground-feeding birds and other creatures on the ground.  Lethal management sounds quite in order and even logical! It's all very politically correct. Who could argue against conservation science? Forget that these "pests" are our native iconic animals, family mobs, living where they rightly live! 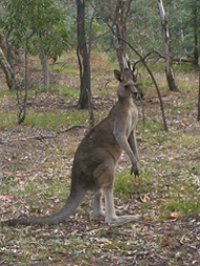 The explanation for the "cull", or population control of kangaroos, appears to be quite scientific and ecologically sound.  However, the science to support all these allegations is not evident or being revealed to the public.  The Canberra and wider public deserve to know.

In an ABC interview, Mr Iglesias refused to answer questions about the number of kangaroos actually in ACT nature parks currently closed for shooting and how the joeys of shot females would be killed.  Kangaroos are part of nature, but apparently not in the ACT's parks.  Does he really know the density of kangaroos, their numbers, and if so, where are the results of the surveys?

Where's the evidence of "overgrazing"?

There should be evidence of  overgrazing by kangaroos, and where.  We should know what species are starving due to kangaroos overgrazing.

Kangaroos have been evolving harmoniously with all other species for 16 million years, something we modern humans have failed  to do in our relatively short history in post-Colonial Australia.  As for soil loss and erosion, it is mainly caused by livestock, not our soft-footed native marsupials that are perfectly adapted to our soils and vegetation.

The kangaroo "cull" sounds all very clinical has all the terminology of bona fide and deceptively robust science.   However, the science isn't forthcoming, and cannot be validated or verified.  True science encourages skepticism, reviews and inquiry, not stonewalling and political deception.

Vital evidence and data is missing

Minister Simon Corbell, chief of staff for the Environment said he had been toying around with so that we can find out the density of kangaroos across these nature reserves. He could not give the area of these nature reserves.  The remaining kangaroos will be far less than the manufactured and magical limit of one kangaroo per hectare, according to what is set by their pseudo-science.

Don Fletcher on the Population Dynamics of Eastern Grey Kangaroos in Temperate Grasslands, seemed to previously discredit claims at the basis of these culls, and the need to manage reserves down to one kangaroo per hectare. For instance, he wrote on page 237 of his study that :

The study did not provide evidence that high densities of kangaroos reduce groundcover to the levels where erosion can accelerate. Unmanaged kangaroo populations did not necessarily result in low levels of ground cover. Groundcover had a positive but not significant relationship to kangaroo density, with the highest cover at the wettest site where kangaroo density was highest. Weather has an important influence on groundcover.

Kangaroos and grasslands have evolved in harmony together for tens of thousands of years and are mutually dependent. There is copious scientific evidence to prove this – and the scientists actually went out into the field rather than making subjective evalutions.

For the kangaroos' own benefit?

This "cull" represents 3/4 of the estimated population of kangaroos in the parks and will see the brutal death of around 1000 pouch joeys. ACT Parks and Lands staff say the cull is to stop starvation in case of a drought. Another source from Parks and Lands say there is no overgrazing! They say there is no overgrazing this year as there is plenty of grass but they need to kill kangaroos because their populations have increased by 60% and if they wait till future droughts they will have to kill even more kangaroos. They were worried about future conditions for these species if kangaroo populations are allowed to flourish. Ironically, no-one seems to worry about the misanthropic “future conditions” of human population growth!

Joeys to be dispatched - "humanely" of course

The "cull" is based on subjective conclusions, not on science

This is subjective assessment of "too many" kangaroos - not about ecology or science of any type.  They are hiding behind terms used in bona fide science, but it's greenwashing

Perhaps a ‘Four Corners’ on Australia’s treatment of its iconic and internationally-recognised native animals might go some way towards exposing the corruption and cruelty of the and “animal welfare” of the “cull” just like they exposed and uncovered Australia's vile and horrific live export trade.

Whose numbers are out of control? Who is overgrazing? Who is moonscaping? Who is poisoning Earth's environment? Who destroys forests killing everything in their path ? Who is endangering all the endangered species in the world ? The kangaroo killers need a reality check and a good mirror on their own species.

I still cannot find a more humane nor more planet-saving strategy than mass human sterilisation for a few generations using say hormone modifying powered milk. No-one dies, no one physically suffers, no famine, plague, wars or pestilence; yet effecting an outcome that could return global human population to what it was in 1800 - about 1 billion or less in just two generations, providing a Great Flood like fresh start and the Earth and its disenfranchised nonhuman inhabitants a new lease on quality life. Tigerquoll Suggan Buggan Snowy River Region Victoria 3885 Australia