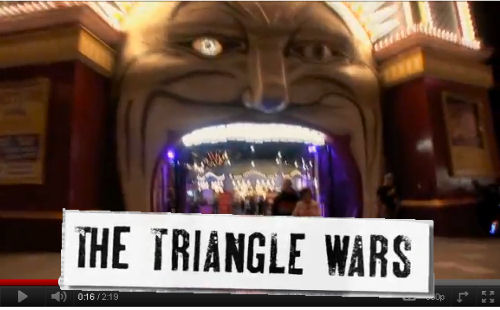 Mary Drost of Planning Backlash writes: "I saw the movie this afternoon in Elsternwick. A full house and rave comments. It is brilliant and will inspire you to never give up. Really everyone should see it, and that includes Councillors and MPs. It shows what people power can do!"

About 'The Triangle Wars'

A celebrity photographer. An eccentric politician. A high-powered property developer. An epic battle to decide the fate of a St Kilda parking lot.

In May 2007 the Port Phillip City Council unveiled plans for a large-scale commercial development on the St Kilda foreshore - a $400 million mega mall that would comprise 180 shops, a hotel, a supermarket, eight cinemas, a gallery and five bars. Local residents were outraged, and with developers preparing to push the project through council, the community galvanised to stop it going ahead.

A compelling story of democracy in action, truth proves stranger than fiction as accusations of betrayal, deceit and corruption abound. Filmed over three years, The Triangle Wars captures the fascinating battle between an outraged community, an intractable local government apparatus and a powerful development consortium, as heads roll and careers are destroyed.

Where to see it

'The Triangle Wars' in cinemas - starts Thursday for a short time only this Thursday 6th October at six cinemas in Victoria, and in Hobart and Narooma, NSW. It is important for Australian democracy and the war against the growth lobby and over population to attend the first few screenings.

It's really important to get people there straight away - if we don't, our season will be cut very short. If word of mouth in Melbourne is favorable, the film will travel to cinemas around Australia, and possibly the world, so please spread the world.

Jill Quirk of Sustainable Population Australia writes, "I agree with Mary Drost about this film. It is a wonderful souvenir of the events and the characters."

How to screen The Triangle Wars in your community

I believe the film ran for 90 minutes but it left those I spoke to wishing that it had gone on. It was riveting throughout with skilfully chosen interviews revealing the perspectives and characters of the players in this drama. Many in the audience would have identified most strongly with the protesters against the proposed overblown exploitative, view- blocking intrusive mass of buildings and concrete walkways on a tiny piece of land near the foreshore in Melbourne's colorful, crowded and slightly seedy inner bayside suburb of St. Kilda. The film captures the character of the place - its remnant natural setting, Luna Park where one can spend a few vacuous hours doing the rides, and its exotic and artistic flavour. The film highlights the values of the people who so strongly opposed the commercial development and their disdain for the assumption that shopping comes first over all other activities. We watched the decision making process of the council and could almost see the individual minds at work as they deliberated. This film well and truly transcends its time and place though as it could happen anywhere and it is about the universal theme of democracy.

The Triangle just won the Best Australian documentary award! Despite this, there are still problems getting it screened in Sydney. It did screen there yesterday in a once-only spot at the Antenna Documentary Film Festival, which is where it received the festival's Best Australian Documentary award. Of course there's an audience for it in Sydney and around Australia, but it seems likely that mass media (which invests in land-speculation and unwelcome developments) won't be anxious to let people know about it. And it is actually about stopping a huge multi-cinema complex, so I guess we should not be surprised that it isn't showing in Frankston, for instance, where a similar complex went up a few years ago, despite community protest.

Write a review of The Triangle Wars

Consider writing a review on a cinema site of this film to publicise its importance. Here at the Classic Cinema Elsternwick internet site, for instance, you can write a review: http://www.yourmovies.com.au/movies/index.cfm?action=movie_info&imdb_id=2049573&title_id=43402

It's a great and uplifting story when I have become so accustomed to the welfare of the majority being sacrificed to selfish vested interests. On this occasion, residents of Saint Kilda succeeded in throwing out at the ballot box councillors of the City of Port Phillip who ignored the clear wishes of the community they were supposedly representing and tried to impose a huge development in a car park on publicly owned land on the beach front.

Not every Australian community can hope to be as organised and coordinated as were the citizens of Saint Kilda. So, far more often, the interests of developers have prevailed in Australia in recent decades. If Australia had Direct Democracy written into the Constitution, it would not be be possible for selfish vested interests and their glove puppet Councillors to impose their wishes upon the local community as they almost succeeded in doing in Triangle Wars.

Please support the GetUp proposal for Direct Democracy at tinyurl.com/3nmwwjq.

To screen Triangle Wars in your community ...