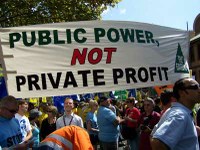 Dr Kaye said: "Premier Morris Iemma and his Treasurer Michael Costa have led their government to the brink if disaster.

"They have broken faith with the union movement, the membership of their own party and the community.

"They have no mandate to sell off the industry.

"They are facing massive defeat at the ALP state conference next weekend.

"If the Premier does push ahead in defiance of his own party's governing body, it is unlikely he will be able to get privatisation legislation through the NSW Upper House.

"It is time for the Iemma government to abandon their sell off scheme and stop the massive waste on money on consultants and bankers.

"Michael Daley is a keen supporter of Premier Iemma's privatisation proposal. He was one of the three government representatives on the Unsworth Committee that gave the go ahead.

"Mr Daley needs to know that his constituents are firmly opposed to the sell-off. If the Premier gets his way, household electricity bills will skyrocket, jobs will be lost and it will be much more difficult to control the state's greenhouse gas emissions," Dr Kaye said.

See also Party faithful boo Iemma in SMH of 3 May.