Mother Agnes Mariam ON the Cross; denigration and denial of the Syrian reality

People all over the world have been shocked to discover that Mother Agnes Mariam, heroine to many women and men all over the world and peace activist on the ground in Syria, withdrew from speaking at a UK peace conference because two British supposedly 'left-wing' male speakers and journalists - Jeremy Scahill and Owen Jones - threatened to withdraw from speaking if she spoke. Neither speaker has given any substantive explanation for their objections to Mother Agnes, but it seems that both have succumbed to propaganda that the Syrian government of President Bashar al-Assad is brutal and that Agnes Mariam supports the government. This treatment of Mother Agnes Mariam is tragically bizarre, when she has eclipsed professional peace negotiators in so many spheres at once: In her physical bravery in rescuing thousands of people in the war-torn region; as a nun-pacifist woman-leader in the male-dominated politics of church and war; and as a local peace-activist in an internationalised field of jihadists. The article below seeks to highlight just some of these injustices. See links at the end of this article, under "Notes," including a filmed interview with Mother Agnes Mariam done by Susan Dirgham of AMRIS in Australia July 2013. 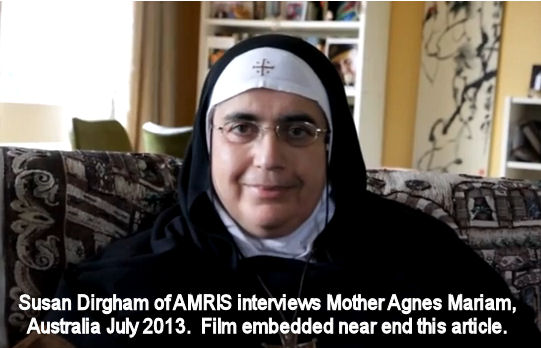 A few weeks ago, following months of siege in a suburb of Damascus, over 5000 civilians were helped to safety during a ceasefire negotiated by Mother Agnes Mariam of the Cross. This suburb of Moadamiya al Sham was one of several around Damascus held by armed rebel groups and foreign jihadists, with the residents trapped there and facing serious food and supply shortages.

Whether these residents were supportive of the 'revolution' - or insurgency - or not, it was in the rebel groups interests to hold them there as 'human shields'; negotiating their release. Movement to the safety of government shelters in Damascus was therefore fraught with difficulties and dangers. 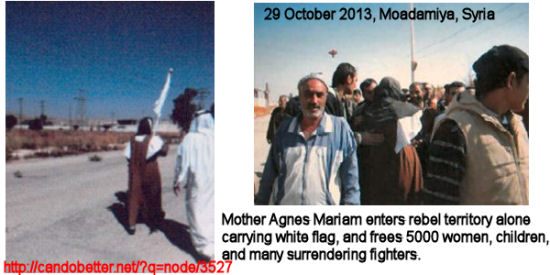 A 'negotiating team' was assembled to go into the heart of rebel territory, led by Mother Agnes - not just figuratively. She went ahead with a white flag, risking her life and faith that a sniper would not put an end to this humanitarian mission. Joined by the rest of the team she then came to a reconciliation and agreement with rebel leaders on the release of some 5,400 people, mostly women and children.

While this was a great success, perhaps more significant was the voluntary surrender of over 500 'rebel fighters', who had clearly been impressed by her entreaties to give up the fight and return to 'fight for Syria', accepting the Government's offer of amnesty.

In her report on the 'rescue of Moadamiya' she emphasises that the Government for its part kept to its word, and faith - that those men who genuinely surrender will not be punished or ill-treated.
/?q=node/3527

It is as though the spirit of reconciliation and peace embodied in Jesus' preachings and actions 2000 years earlier in this land is being reborn, and it is happening through the agency of people of such genuine good will and faith as Mother Agnes. Such a spirit is infectious, and others are inspired to forgive and to reconcile and to trust; this is the spirit now which can heal Syria's dreadful wounds.

The spirit that could heal those wounds .... were it not for the treachery and ill-intent of foreign powers who have already invested so much in destabilising Syrian society and destroying its wealth and infrastructure with their proxy armies of fanatics and mercenaries. The regaining of control by the Syrian government threatens the whole project for regional influence and control that is the driving force behind 'the West's' behaviour over Syria. It is increasingly clear that the West has lost the battle, in the absence of military intervention.

What should the 'Western powers' do?

So what should 'We' do? How can the West stop the truth of the last two and a half years emerging? The truth behind the many 'massacres' confected to excuse Western intervention? The truth of Syrians fleeing from rebel 'liberated' areas? ("Liberated from their inhabitants," as Mother Agnes points out.) The truth of the 'Chemical Weapons attack' on Ghouta that nearly brought about a regional war, despite not a single proven victim? ( The OPCW team did no autopsies.)

Perhaps those responsible for the recent denigration of Mother Agnes Mariam were inspired by biblical history, realising that a 'betrayal' from those who would be her supporters could deliver a mortal blow. And so it came to pass that contributors to the Stop the War Peace Conference in the UK refused to share a platform with this true peacemaker.

Have we learned anything in two thousand years?

Internet Site of the UK Stop the War Conference.

The Interview with Mother Agnes Mariam features in the second half of the 26 minute episode of George Galloway's new Sputnik program, which is embedded below. The first half includes more material on the current Western-directed war against Syria.

on 27 November ABC Radio National broadcast a provably false claim by the BBC#fnSubj_1" id="txtSubj_1">1 that Syrian Government military forces had "dropped a 'napalm-like' bomb on a school playground nearby."

Susan Dirgham, National Coordinator of "Australians for Mussalaha (Reconciliation) in Syria" responded by posting the following to the program web page:

For a number of reasons, I was greatly disturbed to hear this report on RN's 'Religion and Ethics Report'.

Firstly, there has been serious questioning about the authenticity of this report of a Syrian government attack on a school on 29 August. Even Craig Murray, a former UK ambassador, has suggested the original BBC report which featured Dr Ahsan's UK colleague was not reliable. Secondly, we are not informed by RN that Dr Ahsan was a captain in the UK army before she studied medicine and she has experience of war zones. Dr Ahsan is also very media savvy, having presented many programs on television; she even has an agent as she is a presenter for hire. Thirdly, we are not informed that Dr Ahsan must have crossed into Syria illegally to enter 'rebel' territory in the north and that the UK colleague she accompanied is purported to have family links to the militarized opposition. In crossing into Syria via the Turkish border, Dr Ahsan would have surely seen evidence of at least some of the thousands of foreign jihadists going into Syria to fight the regular army. Some go to fight for an Islamic caliphate, with Damascus as its capital, while others go because they hear dubious media reports such as this which make them believe Muslims are under attack and they need to be 'saved'.

In October, Rachel Kohn wrote on the 'Religion and Ethics Report' blog: "The assault on religious freedom is one of the most important trends in the world today, yet it remains under-reported and even ignored by most secular media outlets." This assault on religious freedom is occurring in Syria. In recent weeks, it has become even more evident that Christians have been particularly targeted by extremist fighters in Syria. Schools and school buses have been attacked, children and teachers killed. Ancient Christian towns, such as Maaloula where Aramaic is still spoken, have been attacked by 'rebels'. Many churches have been targeted, priests and bishops kidnapped and killed, yet instead of an accurate in-depth analysis of all this, "Religion and Ethics Report" presents what could be fairly described as very crude war propaganda.

Andrew West, presenter of the Religion and Ethics Report responded in an e-mail:

I have posted your comment but the interview quoted UN reports.

I'm simply not going to enter into a long debate about these matters, Susan.

On previous programs, we have pointed out the role of foreign jihadis and Saudi backed extremists.

But it is increasingly clear to me that you are unwilling to countenance any criticism of the Assad regime at all.#fnSubj_2" id="txtSubj_2">2 There are no good guys#fnSubj_3" id="txtSubj_3">3 in this fight.

Please do not bombard me with material, as you did before or I will simply block your emails.

#fnSubj_1" id="fnSubj_1">1. #txtSubj_1">↑ The BBC is known to have repeatedly lied to its audiences about the Syrian conflict. Evidence of this deceit about the Syrian conflict can be found in the following articles: BBC abandoning a pretense of journalism of 6 Oct 2013 on Voltaire Net, MEA CULPA: BBC world news editor: Houla massacre coverage based on opposition propaganda of 15 Jun 2012, The Criminal Voices of Media Propaganda. The Insidious Role of the BBC of 3 Sep 2013, The BBC: A Criminal Instrument in the War on Syria of 24 Aug 2013, Fake BBC Video: Irrefutable Evidence of a Stunning bit of Fakery by the BBC of 7 Oct 2013 and BBC Media Fabrications on Alleged Incendiary Bomb Attack in Aleppo, Syria of 5 Oct 2013 on Global Research and
The role of the BBC in the Syrian conflict of 3 Nov 2013 on Apophenia. The BBC was also found in a court case to have lied to protect the terrorists who committed the 9/11 false flag outrages.
#fnSubj_2" id="fnSubj_2">2. #txtSubj_2">↑ In 2003, the fraudulent claim that the Iraqi regime of Saddam Hussein threatened its neighbours with Weapons of Mass Destruction (WMDs) was used to justify the invasion which resulted in the deaths of hundreds of thousands of Iraqis. Given that horrific death toll and that 120,00 Syrians have already died at the hands of the US-backed terrorists, why shouldn't Susan and others who wish to end the current war in Syria, be allowed to show that similar claims made against the government of the popular President Bashar al-Assad are equally fraudulent?
#fnSubj_3" id="fnSubj_3">3. #txtSubj_2">↑ By use of terms like "good guys" and "bad guys" Andrew West is apparently attempting to trivialise this gravely serious conflict. If we must use such terminology, then surely the Syrian Government and the members of the Syrian armed forces, who, at a terrible price, have courageously defended their people against the sadistic terrorist invaders, are entitled to claim the label of the "good guys".