Trust me, I'm an economist

It seems that tax cuts are all the rage with the PM praising Trumps bold initiatives and vowing to push through similar (but smaller) cuts in Australia. Bill Shorten, while not opposed to this form of pea & thimble trick has tentatively suggested that the the government ought to say how these cuts could be funded. Well the answer is all there in the history books. Ronald Regan while not the first to use tax cuts was however the one who tried to justify it by claiming the cuts would so boost the economy that tax revenues would increase even more than the loss incurred by the cuts. It became know as trickle down economics which then morphed into voodoo economics when it was found that the national debt had doubled. To his credit John Howard learnt two things from this débâcle - tax cuts win votes and any problems created will be inflicted on the next government. 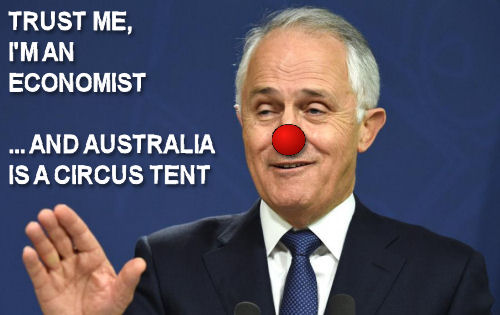 So he went in boots and all with a wide range of tax cuts to get maximum voter appeal. He introducing the over-60 superannuation tax holiday and other super concessions, family payments to middle-income households, age-based tax concessions, lots of income-tax breaks for middle to higher-income households and introduced the capital-gains-tax concession; bolstered the first-home buyers' grant; and boosted immigration, particularly skilled immigration which not only reduced the need (and cost) for local training but put pressure on housing demand. In education, he dramatically increased federal funding to private schools, and cut funding to public schools with the result that the number of public schools has actually decreased (58 in 10 years) despite a rapid rise in the number of students.

Supporters of this policy argue that Howard left the nation with a sizeable government surplus which is not quite correct, the actual surplus amounted to only 7.3% of GDP , about half of that held by Chile , a tenth of that in Finland and a twentieth of that of Norway This was a dismal performance considering Howard had the benefit of the minerals boom which boosted government revenue by $334b over the years 2004 to 2007. There was also the sale of assets like airports the National Rail Corp, Dasfleet, Telstra, the remaining share of the Comm. bank and many other valuable enterprises which yielded another $72b. In a somewhat bizarre move they also flogged off nearly all the nations gold reserves, 167 tonnes of it, for $306 per ounce just before the gold price more than tripled. Despite their mantra for lower taxes the Howard government introduced the GST which reduced the burden of providing federal funding for the states by $44.38b in 2007/8 .

Unfortunately the tax cuts made plus those promised by Howard at the 2007 election were matched by Rudd and will be extremely difficult to reverse by any future government which will have to find alternative revenue sources or make even more spending cuts. Malcolm Turnbull intends to put the medicare levy up from 2 to 2.5% , has cut 15,000 public service jobs since 2013, slashed university and even medical and scientific research funding with 700 full time jobs lost in this sector. He has now announced that he intends to cut the corporate tax from 30 to 25%, a move that will cost $65.4b over 10 years. Unlike the Howard years Turnbull is introducing these cuts at a time when the government has a budget deficit of $33.2b and is doing so without explaining how they will be funded. But like any politician he put a positive spin by saying the tax cut was a way of “putting more money into people’s pockets” and the Government’s priority was to “lower middle income tax rates”. He then added that there was “no doubt” taxes in Australia were high, an assertion contradicted by the Organisation for Economic Research and Development (OECD) which put Australia near the bottom at 28th out of 35 nations.

Putting money in peoples pockets does sound attractive and its possible that some corporations would use the tax cut to increase shareholder dividends. But what happens then? If the lucky shareholder decides to buy some new gadget on line the net result is a higher import bill. Alternatively if the corporation decides to spend the tax windfall on increasing their productivity with new equipment the import bill goes up and employees risk becoming made redundant by the new technology. Not exactly a win-win situation.

The best way to "put money in people's pockets" is to ensure they are paid well or at least properly and to ensure that the necessities of life - housing, power and water are affordable. Decisions taken by governments in Australia in the last few decades have mitigated against this. e.g massive immigration, privatisation and loss of manufacturing due to government decisions favouring imports.They have made Australia more "competitive" but with no net benefit to its people.