The cover photo is of one of the 13 ringtail possums brought into care at stage 1 of VicRoads' clearing. (See "VicRoads mulch wildlife on Mornington Peninsula -AWPC intervention".) She had a deep facial injury which eventually recovered; she has since been released back into the wild. She was one of the lucky ones, many animals were mulched alive or run over by the heavy machinery that VicRoads used. Autumn has arrived and re-planting of the cleared median strip has not commenced, I would assume that it’s because they haven’t yet finished installing the safety barriers. This begs the question why did they go ahead and clear in spring, if they were going to take this long to complete the barriers? They could have left nesting birds to fledge.

VicRoads have tendered new contractors for stage 2 of the clearing. This time the clearing is said to commence from Rosebud back to Dromana.
The AWPC sent an email to VicRoads on the 20th of April and again on the 2nd of May asking for the name of the new contractor, the date they intend on starting the clearing and information about how many zoologists will be onsite. The AWPC have had no reply from VRs about the preparation work that was agreed to in their own ‘Vegetation Clearing Action Plan’. 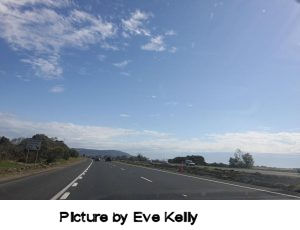 Page 4 of the preparation plan was for the contracted zoologists to contact wildlife shelters and vets to gauge capacities and organise wildlife intake. To date, no wildlife shelters have been contacted. Wildlife shelters have been clear that we need plenty of time to plan for the wildlife that might need to come into care. With no confirmation date from VicRoads this planning is still up in the air.
However, one of the wildlife shelters who got tired of waiting and contacted via the phone and got contact details of the contractor. She said that the new contractor gave a date around the 13th of May for the recommencement of the clearing. If this is true, they are failing to prepare and are already not adhering to the agreed and consulted plan.

How can VicRoads be trusted to follow the rest of the plan if they are failing in the preparation stages? Again, VicRoads’ communication is very lacking.

I would also like to draw your attention to an article printed in the Irish Times in 2007 about the danger that the wire safety barriers cause to motorcyclists. Back some countries were considering removing these types of barriers from their roads. Why clear vegetation and injure, kill and orphan protected wildlife if they may need to remove the barriers later because they are unsafe?

https://www.irishtimes.com/life-and-style/motors/eu-reviewing-wire-barriers-1.963624
#000000;">In 2014, it was reported ‘They are banned from use in a number of European jurisdictions: Norway, France, Denmark and The Netherlands among them.’
https://www.themotorreport.com.au/car-review/fail-roads-designed-to-kill-part-2-82062.html#000000;">

#000000;">
And this: https://www.theage.com.au/national/victoria/road-safety-barriers-leave-no-margin-for-error-country-fire-captains-warn-20171226-h0a434.html
Whilst VicRoads claim that it was the CFA who recommended ALL of the vegetation to be cleared because it was a fire hazard, we find the CFA has also warned against these types of barriers. It is clear that if the median strip is not replanted and maintained, and grows weeds and grass, this also presents as a fire hazard. Along with the addition of wire barriers, these conditions create more hazards for motorists and will not make the roads safer.
“Mr Chapman warned that if a grass fire breaks out along a highway, motorists will have “nowhere to go”.
#0a1633;">http://www.gippslandtimes.com.au/story/5067013/wire-barrier-worries/
#0a1633;">
#0a1633;">And this: https://www.theage.com.au/politics/victoria/guy-wire-act-opposition-poised-to-unwind-botched-barrier-initiative-20180213-p4z04y.html
#0a1633;">
#0a1633;">There has recently been a second wave of community outrage about the clearing of the median strip and doubts about the safety barriers. Mornington Peninsula residents feel ignored and blindsided. They feel the now barren median strip has ruined our green gateway to the peninsula.
#0a1633;">
#0a1633;">https://www.facebook.com/groups/MorningtonPeninsulaVoice/search/?query=freeway

#0a1633;">
One community member wrote on FB (24/4/18): “Safety barriers? Really? Making what safe? Are they claiming that cars can’t drive through those horrible steel rails? To me they are simply making a mess, ruining habitat, making everything look ugly and fenced off. Seems like a massive waste of time, money and resources. Fix Eastbourne and Jetty Rds instead of this.”#0a1633;">

And another: “Vic roads are a joke this has been the longest project for so little work done since last year. Trees were to be planted already but nothing has been done what so ever, its like driving down a tunnel with all the barriers on both sides of the road , night time driving must be hell with on coming traffic blinding the cars on the other side of the road. The whole area looks like a bomb has been dropped on it.”
Brenda Marmion of Crystal Ocean Wildlife Shelter wrote: “Travelling to Mornington on Sunday where vegetation completely cleared were two corpses of juvenile kangaroo joeys”
#0a1633;">
#0a1633;">Wildlife volunteers are not satisfied with VicRoads’ response to our concerns, they have failed to communicate and adhere to the plan that they funded. There is no point in having a plan if they are not following it.
#0a1633;"> 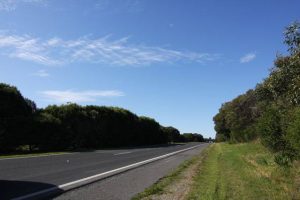 Picture by Eve Kelly
#0a1633;">The AWPC wants the plans to clear the median strip of the freeway to cease immediately and for VicRoads to re-think the entire project.