State governments continue to promote untenable exploitation of the Murray-Darling

This article has been updated from what was previously a #media">media release, which is still included below.The article below was originally published on 4 Nov 09 on the ABC Unleashed web site.

Rice producers are gearing up to plant a crop this year, following the NSW Government's announcement of a further increase to their water allocations. The Rice Growers Association is predicting a harvest of around 200,000 tonnes.

Analysis of 2005-2006 figures from the Australian Bureau of Statistics and the Australian Bureau of Agricultural and Resource Economics indicate that the value of the 2009-2010 crop will be around $55 million (in 2006 terms), or 0.37 per cent of the gross value of agricultural production of the Murray Darling Basin ($15 billion in 2005-2006), representing approximately 0.03 per cent of the likely global rice harvest in 2009-2010.

Historical water usage data from the ABS suggests that cultivation of this meagre rice crop will consume around 250 billion litres of Murray-Darling water. This comes at a time when the Australian Bureau of Meteorology is once again forecasting below average rainfalls across much of the Basin, the Murray River is still not flowing to the sea, the Menindee Lakes are at all time seasonal lows and some downstream communities are unable to drink the water that flows from their taps. 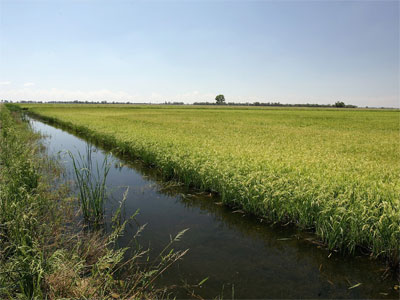 It is interesting to note that this estimated volume, to produce what is likely to be one of the smallest Australian rice crops in recent years, is over three times the amount that the Brumby Government in Victoria is seeking to extract annually from the struggling Goulburn River using a pipeline costing taxpayers $750 million.

It is also close to double the collective annual consumption (137 billion litres) of Adelaide's 1.1 million domestic water users in 2008 and equivalent to two-and-a-half times the maximum annual output of the highly controversial desalination plant that the Rann Government is constructing in South Australia, at a price to the public purse of $1.83 billion – and at the risk of significant cost to the local marine environment.

The seemingly generous decision of the NSW government is in fact further evidence of the dysfunctional governance of the Murray-Darling. It confirms that while individual State Governments continue to manage the water of the Murray-Darling Basin they will serve their own interests. As a result it is unlikely that the rivers will receive genuine increases in environmental flows of the magnitude required for their revival. This casts doubt on the river's abilityto support the millions of Australians who depend on it.

When contemplating the merits of rice cultivation in the Murray-Darling Basin, the following information should be considered:

- Most recent relevant ABS data reveals that, in 2005-2006, rice cultivation consumed 16 per cent of all water used for agriculture in the Murray-Darling Basin, but contributed less than two per cent to the gross value of agricultural production in the Basin in that period.

- Based on the same ABS data from 2005-2006, the cultivation of rice requires 4,536 litres of irrigation water (all obtained from the Murray-Darling system) to produce one dollar's worth of product, as opposed to the Basin average of 515 litres per dollar for all agricultural commodities.

- The Australian Bureau of Meteorology predicts that, within two to three decades, drought will occur twice as often and be twice as severe throughout the continent.

- Analysis of data from the International Rice Research Institute, reveals that, even in its bumper season of 2000-2001, Australian rice comprised a mere 0.27 per cent of the global rice harvest.

- The largest rice crop in recent years was in 2005-2006, when around one million tonnes was harvested in the Murray-Darling Basin. According to the Australian Bureau of Statistics figures, this crop was worth 276 million dollars: 0.7 per cent of the total Australian value of agricultural commodities in that year (37.8 billion dollars).

As with all irrigating enterprises in the Murray Darling Basin, these industries grew in response to irresistible, but untenable and ethically-dubious, governmental over-allocation of the Murray-Darling river system; arrangements which currently permit extraction of much more water than the system can replace in historically "average" years - of which there have been none of late.

Australians are increasingly questioning why the semi-arid ecology and hydrology of the Basin are being sacrificed to enable cultivation of water-intensive crops, especially rice and cotton which contribute little to domestic markets and whose major players are predominantly overseas investors.

It is now painfully clear that an ecologically debilitated Murray-Darling river system can not provide the wide range of ecological services essential to its communities and the millions of other Australians who depend on the agricultural productivity of the Basin.

Moreover, in the absence of a healthy riparian environment, the multimillion dollar regional tourist industry will inexorably decline.

The current policy of the Council of Australian Governments effectively leaves the future of our water in the hands of market forces; treating this essential and threatened resource as a tradeable commodity.

Even if one agreed with this highly contentious approach and the associated National Water Plan, it will quite simply take many years too long for this mechanism to induce the fundamental change in agricultural practices that is urgently required if the Murray-Darling is to be anything more than a shadow of its previous self.

Irrespective of worrying climate change predictions, unless Basin agriculture undergoes radical and rapid transformation, this food-basket of the nation will in future be capable of supplying a fraction of the staple cereals, vegetables, meat and dairy products which it has historically provided to Australian households. Importantly, the social fabric of the region will continue to unravel.

Australians look to the Commonwealth to protect our natural resources and rural communities for future generations. It must demonstrate its commitment by wresting control of the Murray-Darling Basin from the squabbling States and placing its management in the hands of a truly-independent and appropriately empowered body. This body must understand that the environmental health of the river system underpins any services that we seek to obtain from it and prioritises this above the demands of vested interests.

It also requires that the irrigating community admits – for the sake of the future of the Murray-Darling as a whole – that inappropriate crop selection by some of its members has had a deleterious effect on what once was the vibrant bread-basket of the nation.

Such a process must reject political tokenism, corporate spin and institutional obfuscation and demand sincerity, understanding and meaningful action from all stakeholders.

It will also require urgent and dramatic reduction in private water allocations, with fair reparation for those affected by this essential restructuring.

If the Commonwealth believes that to enable this to occur a State of Emergency must be declared, they should have confidence that the majority of Australians would support that decision.

Previous governments have cracked the Basin; current governments must now pay to have it restored, before it disintegrates.

In so doing, Australians will cease to perceive their elected representatives as instigators

In welcoming this announcement, national coordinator of FWU, Ian Douglas, has requested that that Mr Gregson does all he can to ensure that irrigators act in-line with this philosophy and do not give into temptation resulting from irresponsible governance.

Dr Douglas stated, "The Rice Growers Association announced last week that, in response to the lifting of water allocations by the NSW government, its members are preparing to plant a crop this year, in expectation of a harvest of around 200,000 tonnes."

"Based on 2005-2006 data from the Australian Bureau of Statistics, FWU has estimated that the cultivation of this crop will remove 250 billion litres of water from the system, to produce a harvest which we estimate will be worth only 55 million dollars based on 2006 prices", he continued.

"This cannot be seen as a socially or environmentally responsible use of Murray-Darling water, coming at a time when the Australian Bureau of Meteorology is once again forecasting below average rainfalls across much of the Basin, the Murray River is still not flowing to the sea, the Menindee Lakes are at all time seasonal lows and some downstream communities are unable to drink the water that flows from their taps," he added.

Dr Douglas concluded, "Although the primary blame lies squarely with the NSW Government in approving this increase in water allocations, all Australians concerned about the future of the Murray-Darling must place its environmental health before financial opportunism; the selection of appropriate crops is an essential component of this policy".