I have now attended three workshops on how to compensate for the loss of southern brown bandicoot (SBB) habitat because of urban expansion adjacent to the Royal Botanical Gardens Cranbourne. 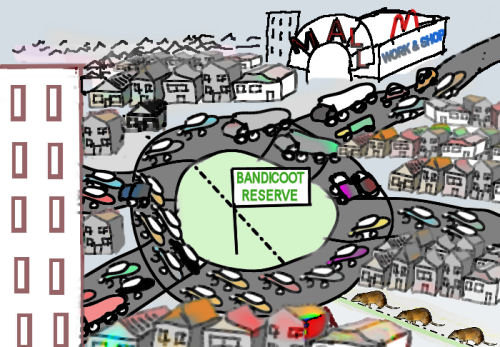 At the first meeting I went with a totally open mind in order to see what was on offer for the loss of SBB habitat adjacent to the Royal Botanical Gardens Cranbourne. I was willing to see how corridors would work, where they would be located and how wide they were to be. I also wanted to know what other alternatives there were on offer. To my disappointment, there were nothing else but corridors recommended as compensation for habitat loss and b pop loss. Large reserves did not get a mention. There were also no considerations about the effects of climate change.

At the second meeting, things somewhat improved. While corridors were still the main subject, some reserves and trans-location of SBB’s was also suggested. After examining the viability of the proposed corridors I found that at least two of them, one to the Pines and one to Western Port Bay were, in my view, a ridiculous idea in too many ways which I have already detailed in an earlier report. For the rest of the corridors I decided to wait until I could see the area where they were to be placed and to examine the presence of remnants of SBB’s in the Koo Wee Rup area.

At the third meeting and bus trip I became clearly aware that corridors in this region were subject to the same limitations as the previous two corridors. I had to conclude that all of the recommended corridors were not only ridiculous but also extremely so. On the last stop we were shown a drainage lane with good vegetation and flowing water. In spite of this, SBB’s were still trying to move to each side of this corridor and into totally unsuitable habitat. My question is, how much longer can they survive there while exposed to further urban development and the presence of foxes and cats and floods?

Collectively, a Population Viability Assessment (PVA) applied to all of these corridors to estimate whether they will work for SBB’s would fail totally. (A standard PVA estimates the species population survival potential for the next 100 years.) My own assessment is that these untested corridors will be a total waste of money. They will not work and SBB’s deserve better than just a piecemeal solution.

Lets think about the SBB’s. What would they prefer? If one honestly wanted to provide the best for them, they would have to be properly protected as they are at the RGBC and should be so, in some other, similar reserves as well. We have a moral obligation to properly protect this species by keeping them in reserves such as the RBGC and some other similar reserves. I have no objection to maintain existing pockets of SBB’s in the wild by intensive fox and cat control for as long as they can survive there. However, for them to be able to exist in new, untested corridors is, in my opinion, nothing but a costly gamble and is guaranteed to fail. Have we not learned as yet from the untold failures that occurred with the Eastern Barred Bandicoots where they became nearly extinct before they were eventually protected in large reserves only or on islands. I therefore beg the Department of Environment Land Water and Planning (DELWP) to think clearly and honestly about the many problems with those far too narrow corridors for bandicoots and respond properly to the outcome of a realistic PVA study on them.