"Growing population calls for big picture focus" - Democracy, immigration and the politics of the Age Newspaper 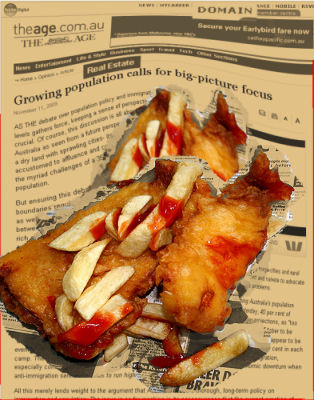 Australia is not a fortress. Huge numbers of people cross and re-cross our borders each year. After all two of Australia's biggest industries are overseas students and tourism. So what does The Age mean by writing that closing the door isn't an option?

"It would show both conceit and naivete to advocate that this vast continent simply shut its doors and leave the rest of the world to its problems."
"Growing population calls for big picture focus," Editorial, The Age 11/11/2009.

It means that The Age is a staunch advocate of a "Bigger Australia" boosted by high immigration- fuelled population growth, reaching at least 35 million by 2049, and rising rapidly in the future.

Is The Age telling Australians that they should not and do not have choice in moderating immigration cohorts and future population growth to more manageable levels? Is a population of 35 million or more by 2049 in Australia's National Interest? If not, in whose interest is it?

Essentially immigration is about client politics. It concerns a public policy which produces concentrated benefits for the few and diffuse costs for the many.[1] For example, groups of developers, construction companies, local media interests and others who benefit from a rapidly growing domestic market, lobby politicians behind the scenes to make sure intakes remain high. In contrast the costs of immigration are diffused in the public arena and there is little or no organised opposition to those costs. Accordingly, Flannery's opinion on governmental policy when it comes to immigration is quite correct.

Describing Australia as a "vast country" and giving the impression that there are large hordes of poor people in the world who can and will flood into Australia [as well as doing the 'We have a moral obligation humanitarian bit'] is disingenuous, especially in the light of the focused benefits that the Age stands to gain from globally marketing Australian land through its property dot com.

The "Report By The House of Representatives Standing Committee For Long Term Strategies " ("The Jones Inquiry") December 1994, was appropriately titled, "Australia's Population Carrying Capacity": One Nation Two Ecologies. On the cover was a map of Australia as a large brown arid continent with fragments of green, livable areas, mainly down the East Coast.

In short Australia does not have the arable land or water to take in huge populations.

Recommendation 10 of The Jones Inquiry includes that not only should Australia have a population policy, but that,

"Proponent's of a radical change in existing policies should bear the burden of proof, bearing in mind that every increase in population imposes social and environmental costs unless accompanied by the adoption of policies of resource restraint and increased sensitivity about waste disposal, urban structures and transport modes"

In the past The Age has led the editorial charge for higher population, notwithstanding public opinion at the time.

What the population / migration debate should be about is whether Australia's present policies on migration are transparently seen to be, and are, in the National Interest. So far, any compelling evidence of this has yet to be forthcoming.

For The Age to oppose Flannery's idea of an independent committee to determine immigration cohorts on the ground
"That it sits uneasily with the basic tenants of democracy", is breathtaking hypocrisy .

Bipartisanship (i.e. the two major parties agreeing with the press to keep this important policy item off the agenda for public discussion) has taken immigration out of the electoral arena for years, depriving Australians any democratic input into population and immigration policies for generations, and The Age has not queried that.

The only way to to try and determine that future population policies and annual migration cohorts are transparently in the National Interest is to have them determined by bodies that are fully accountable to that end.

From all I have read and seen, I firmly believe that the arguments for high immigration-fuelled population growth are either non-existent or equivocal.

However, as John Keynes said, "If the facts change I change my mind; what do you do sir?"

Show me the facts and evidence to the contrary and I am willing to change my mind. I do not believe The Age could or would. But surprise me.

[1] See Chapter 5 of Sheila Newman, The Growth Lobby and its Absence.

Japan's economy grew at the fastest pace in more than two years in the third quarter, as Government stimulus lifted consumer spending. Japan's economy grew 1.2 per cent in the three months from July to September compared to the previous quarter, faster than the median estimate for 0.7 per cent growth. Exports and personal consumption led the growth, while corporate investment picked up for the first time since the January-March quarter of 2008. With the ageing and shrinking population dimming the outlook for consumer spending, Japan remains as dependent as ever on foreign markets to drive growth. Japan has some of the world's strictest controls on immigration, and Prime Minister Yukio Hatoyama admitted that he was broaching a "sensitive issue". Japan has relatively few resident foreigners, although in recent years it has cautiously opened up its job market to nurses and care workers from some Southeast Asian countries. Their economic growth despite an ageing and shrinking population defies the growth-ists who say economic growth and population growth must go hand in hand. Some growth addicts believe that a fall in growth rates means a slump, so more people must be added. Thus we have an addiction habit!