Co-operative breeding and avoidance of incest in dingoes

I was inspired to write this short article after reading evolutionary sociologist Sheila Newman's multi-species population work on cooperative breeding and incest avoidance in Demography, Territory, Law: The Rules of Animal and Human Population, Countershock Press, 2013, chapters 3 and 4. Newman gives theory plus examples of self-controlled populations in variety of species. My primary observation of dingo breeding habits in their native habitat supports this theory and is supported by it. 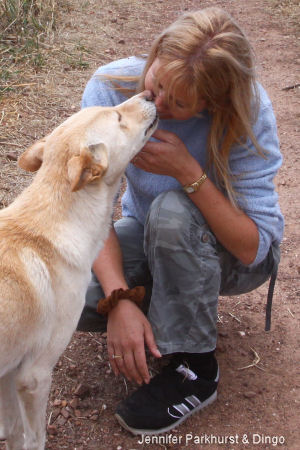 Dingoes have the ability to self-regulate their population, and avoid breeding when times are lean, by suppressing their own estrus (female) and testrus (male) cycles. In normal circumstances, the alpha male and female are able to suppress breeding in subordinate pack (family) members, so that only one pair out of each pack reproduces. A stable dingo pack includes the alpha male and female, and surviving pups from the previous year’s litter. These pups have a vital role as beta pack members, who perform the task of ‘alloparental helper’, to wet-nurse, regurgitate food and deliver food (carcasses) for the pups and to provision the mother.

I have personally witnessed a beta female wet nurse pups of an alpha female (therefore the large litter of 8 pups was well provisioned), and have also seen an alpha female assist a young Mother from a different pack by nursing her pups as well as her own. There was also a case of an alpha female who provisioned her own pups by nursing, and then provisioned another (deceased) female’s litter on the other side of the Island, thus altruistically self-sacrificing for the sake of survival of another dingo’s litter.

Dingoes therefore have an innate ability to help each other survive, indeed, help the species survive, by cooperatively nurturing their young. I have also seen adoption of pups between packs, if numbers in the packs are low and beta members required.

When this role is successfully completed, in most cases, the beta pack members disperse to find new territories and make new alliances, bonding with dingoes from outside their own territory and staring their own packs.

Despite circumstances of provisioning each-other’s packs beyond their own territorial boundaries, in stable dingo packs, incest is non-existent. There is a complete avoidance of inbreeding, producing successful population control (to either raise or lower the population as required), promotion of genetic diversity, maintenance of social hierarchies, with territorial boundaries fixed and serving an important role.

However when pack social structure is disrupted, or entire packs are destroyed, this all changes.

I have seen one circumstance of near-incest and one of incest in unstable dingo packs.

In the first instance, the alpha female’s brother, whose own pack was completely wiped out, and who had no other females within his territory, followed his sister around desperately when she was in ovulation and ready to mate. I watched as the sister and her mate attempted copulation, but were constantly interrupted by the brother. The most fascinating observation of their behaviour was that although they were firm with the brother, insisting that he couldn’t mate, they were kind and gentle while pushing him away. The desire for him to mate was so strong that he had little choice but to continue to try and mate his sister, but there is no doubt that if his pack had survived, and he was able to find an appropriate female, he would not have been in a position to attempt to mate his sister.

In another circumstance, an entire pack was wiped out, except for a male and a female pup. The pair mated when they were 10 months old. Dingoes don’t usually have their first estrus until they are 2 years old, and it was a clear indication that there was something very wrong. Surprisingly, the female produced a very healthy litter of 8 pups. I believe she had a large litter to compensate for the fact that the rest of the pack was gone and the population needed boosting. I am convinced this was a form of preservation of the species, allowing for the fact that the carrying capacity of her territory was large enough for 8 new pack members.

These incestuous occurrences only took place because of loss of stable pack social structure, and bespoke of a species in crisis.

Dingo websites - not to be missed - please promote

Please check out and promote photographer and dingo naturalist, Jennifer Parkhurst's, two websites, which were down until recently and need to be repromoted: http://www.fraserislandfootprints.com/ http://www.nationaldingo.org.au/dingo_dr/