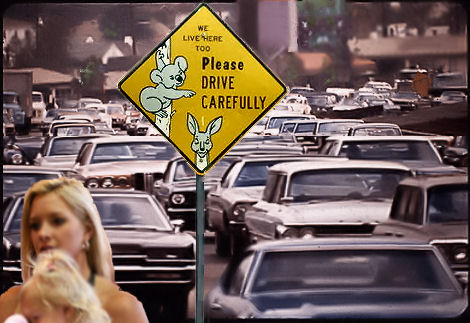 State and Federal Government on the defensive

The Sydney Morning Herald article, "Cap, 'Not the answer to population growth'"(AAP 30 March 2010) quotes only those on the high-population side of the debate. Yet it depicts almost all of them as desperately trying to hose down the arguments for capping population.

Why they are so on the defensive is clear from the Essential Research political poll that was released back on March 1st. Among the usual questions on voting intentions etc was included one on attitudes to population, and the results were stunning:

* 75% agreed and only 19% disagreed that "We just don't have the infrastructure and services to manage more population growth."

* 61% agreed and only 30% disagreed that "Australia has a fragile environment that cannot cope with a much larger population".

* 38% agreed but 52% disagreed that "Having a larger population will help our economy."

* 35% agreed but 58% disagreed that "Australia has the space and resources to cope with a much larger population."

* Coalition, not Labor, supporters were more likely to agree to the first two propositions.

Predictably the growth side tried to argue that it isn't the number of people you cram into the cities that counts, it's the superb way they plan to house them. Growth-promoter Bernard Salt once again got himself described as a "demographer". He also tried to run the aging population scare in reverse, as an optimistic claim that an immigration intake of 180,000 each year is Australia's "get out of jail free card to fund our retirement of the baby boomers".

However Salt admitted that "One thing that you can be confident about in the next 40 years is that, in real terms, petrol will be $5 a litre." It did not occur to him that high-priced fuel implies similarly high-priced fertiliser and food. (Food riots broke out last time oil reached $100 a barrel, because even the third world now grows its food with nitrate fertilisers derived from oil and gas.) One problem with the mega-cities that Anna Bligh and others would create is they will be totally unsustainable -- dependent on people elsewhere being willing to send them millions of tanker-loads of fuel and millions of trucks of food. It is far from clear what these cities can produce to offer in exchange.

Just at present the really valuable commodities, like oil and food, are dirt cheap whereas one pay through the nose for fashion accessories etc -- a situation which makes cities seem sustainable and provides millions of jobs for city dwellers. But it is unlikely this would be the case in an oil-starved world.

Wayne Swan is still trying to swat away the population issue without descending to debate it: "I can't bring myself to agree with those who think we can solve all our problems by putting a freeze on national population growth." But the democratization of the internet makes it harder to get away with such tactics. One internet correspondent, Skooner, retorted:

"No Wayne, we certainly can't solve all our problems that way, but it sure would go a long way toward easing house prices, shortening hospital queues, saving the environment and cutting our carbon footprints. I, and a lot of other Australians would also like to know who exactly you are referring to when you talk about "we" Mr Swan? Just who are "we"? The "working families" which elected you - the Australian people - or just the vested corporate interests that possess an insatiable hunger for more growth and more people.

The ideological gap between the Liberal/Labor (Liboral?) party elites - that are addicted to huge population growth, baby bonuses and mass-immigration - and the electorate has never been greater."
("Skooner", on [email protected])