Trump’s Wall – And the Existing Wall - Article by Mark O'Connor

I spent some hours on the US side of the wall near San Diego one night in the early 1990s. (Yes there has been a wall there since at least Kennedy’s time.) Crossing the wall was essentially a nighttime activity, but the “Mexicans” (they may have been mostly Mexicans going backwards and forwards between family in Mexico and illegal jobs they had in the USA) seemed to have ladders permanently against the wall on their side. Their heads appeared over the wall well before dark, sometimes waving cockily. After dark the border force vehicles cruised up and down on a road on the US side about 200 metres (in most places) from the wall, trying to guess where the “rushes” would come. Tourists sometimes came to see this nightly game. 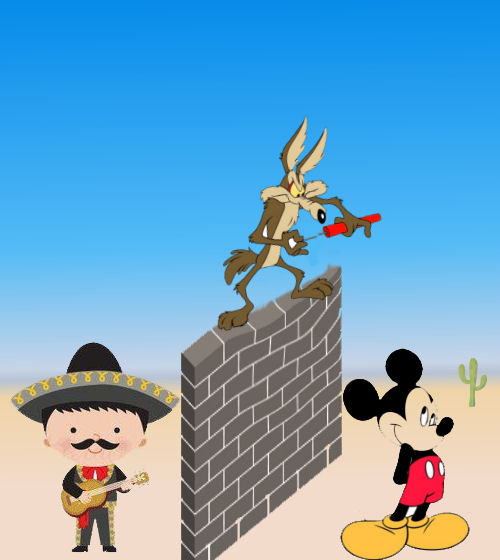 (Meanwhile those with the right papers, including thousands legally working in the USA, streamed into the USA via about ten lanes of traffic near San Diego, with 30 second checks of their papers and car-boot.)

The technique at the fence was for a dozen, or for several dozen, people to all jump down together at a given place, preferably when there were no US vehicles in sight, and make a “rush” through 200 or 300 metres of no man’s land on the US side, and on into the suburban fences and backyards of San Diego and safety. With luck, they would overwhelm the defenders, and many or most would get through. Those captured were manicled with cable ties and taken to a processing centre where some details would be taken. They could be kept only a few hours before lawyers would appear to encourage them to claim refugee status. Since the US could not afford this expense, they would simply process and bus them back to Mexico, sometimes so promptly that the same person would be rearrested later that night while making a second attempt to enter the USA.

Effect of the wall, or of extending it? Mainly it seemed to discourage those not young and fit enough to jump down from it and run the gauntlet. Those I saw being processed were largely young males. I remember one young woman with a child that had a T-shirt saying “I love L.A.”, but I don’t think this method of entry worked well for families. You would need a certain fitness level and a certain disrespect for law or at least for US law, but with persistence you would get into the USA. There was therefore no real screening of who got into the USA; yet granted the possibility of being “processed”, anyone on an international wanted list might need to be cautious or at least have false ID. (This difference is the main reason that “illegals and crime” is an issue in US debates but not in Australian ones.)

A see-through fence would make a lot of sense for the border-guards, so they could see where their opponents were massing. On the other hand, groups like FAIR www.fairus.org think the single most important thing required is E-verification (a system that would force employers to verify that anyone to whom they gave a job was a genuine US citizen or permit holder). Paper certificates were easily purchased by illegals, but on online database would be harder to fool. But Trump knows his supporters want something tangible, like a big wall; and has done little on E-Verify.

Complaints from the USA side about the system in the 1990s were: that the illegals suffered no real penalty for failed attempts; that they created a nuisance for house-holders near the border by trampling and running through their gardens and scaling their fences, and a hazard for motorists (since in fleeing they sometimes ran across highways); and that apprehending them was difficult and physically dangerous work, and often resulted in unintended injuries both to the “illegals” and to those physically tackling them. “Having a rush of illegals go over you is kinda scarey!” And of course the whole “rush” systems seems like an insult to many US voters’ notion of national sovereignty.

Thought I would let readers know that, when I tried to 'boost' this article on facebook (a form of advertising) it was knocked back because they thought it was political advertising. Yet it is just a discussion! So this is another example of why it is a very bad thing to rely on facebook for anything important. Actually I did get it through initially when I boosted it to Australia, but I cancelled that one and made my catchment the United States. Obviously this site is not advertising, but it does publish opinions.