Is the ABC like the pigs of Animal Farm?

Is ABC Political News analogous to the hegemony of the pigs of Animal Farm? 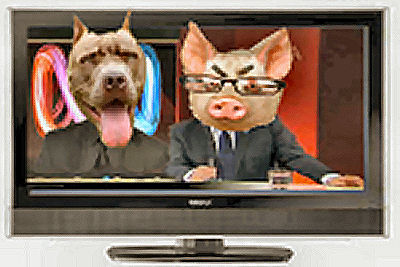 Here is an attempt at a satirical analogy.

Napoleon: Will the real Napoleon please stand up? Is it the ABC CEO or the ABC Head of Editorial Policy?
Squealer 1: RN Breakfast
Squealer 2: QANDA
The dogs: ABC Audience and Consumer Affairs, AMCA (and Ombudsman?)

In the original Animal Farm the animals all dreamed of equality for all, and they set out to achieve it after the Revolution overthrew the humans. With humans removed the animals were finally free and equal.

The pigs knew they were the smartest animals. The other animals were dumb. So the pigs assumed the role of leading the animals to the Utopia of fairness, caring and equality.

Everyone should have everything, and all should be equal. The senior pigs were the products of an environment where their education was paid for by the state. They had always had everything they needed. Animal Farm was in a lucky country, after all, and with the humans now expelled true liberty was assured.

The pigs developed Commandments for all the animals to believe in. They called these the ABC Editorial Policy and the ABC Code of Practice. It was about fairness and impartiality. It was about preventing propaganda from being used as a tool to act against the public interest.

But some animals became more equal than others. The pigs enjoyed annual pay rises higher than the other animals. They also enjoyed defined benefit pensions and a life of comfort in an imaginary world that could sustain itself, based on mere belief; forever. The ABC pigs were Believers. Those who disagreed were Deniers.

Then it started becoming warmer. The pigs wanted a Carbon Tax to keep Animal Farm cool. They would take the money from the other animals and install an air conditioner in the Farmhouse. That would fix the problem.

They were making more and more money from the farm as the population of animals kept increasing. This was good. The pigs were earning more each year; even if the animals were working harder; for less.

The Commandments were slowly being changed over time. The ABC pigs did this so the animals wouldn’t notice. After all; the other animals were dumber than the pigs and it was for their own good. Two important Commandments with their amendments were as follows:

• The ABC has a statutory duty to ensure that the gathering and presentation of news and information is impartial, “except when at its absolute Editorial discretion the ABC decides otherwise”

These revisions allowed the pigs to do exactly as they pleased and their dogs were there to keep order if any of the dumb animals questioned the changes. The dogs simply “tore their throats out” to silence them.