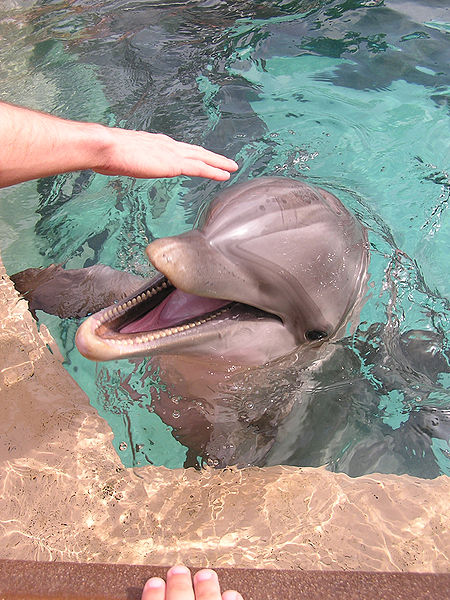 During the 20th century Russia and the United States carried out many military manoeuvres with dolphins, who acted as underwater couriers for the Navy. Generally, the dolphins’ missions were affixing bombs to enemy ships! In October 2000, Russian retired most of their dolphins. These Russian Navy dolphins now swim with sick children to help them recover from their illnesses. Recent studies have shown that dolphins have remarkably curing powers, especially with small children.

Some researchers think that dolphins are perhaps as smart as a seven-year-old! Dolphins are some of the most interesting and intelligent creatures on our planet. They are considered very friendly and are amongst the most wonderful animals on earth due to their intelligence and easy mingling with the humans.

Dolphins can make a unique signature whistle that may help individual dolphins recognize each other or perform any other kind of communication still unknown. They seem to speak a language unknown to humans.

Some people think that these friendly creatures can understand human thoughts and moods. They are gentle and playful when humans swim with them. It has also been observed that dolphins frequently stroke each other with their flippers, hence, indicating that they require physical contact much like humans. A dolphin's skin is extremely delicate and easily injured by rough surfaces--very similar to human skin.

Dolphins love to look at themselves if a mirror is nearby. They will have a look of disgust at any imperfection on their bodies, such as a black circle. Dolphins are social creatures, not only because they like people, but also because they like to swim together.

Off the western coast of Australia, bottlenose dolphins place sponges over their snouts, which protect them from the spines of stonefish and stingrays as they forage over shallow seabeds.

Dolphins are quick learners. Calves stay with their mothers for several years, allowing the time and opportunity for extensive learning to take place, particularly through imitation.

In Ancient Rome and Greece, scholars thought that dolphins had special healing powers and were good omens if they appeared during the launch of an ocean voyage.

According to Dolphin Human Therapy of Key Largo, Florida, and its founder, Dr. David Nathanson, an innovator in this type of treatment, many illnesses and disabilities are receptive to interactions with dolphins. While it is not known exactly what mechanism is at work, the success rate with many illnesses is a positive result of this alternative therapy. Because they are hyper-sensitive to vibrations, dolphins are touted by alternative healers as excellent therapists. Supporters of dolphin therapy claim that the compassion the dolphin displays improves your self-confidence. The improved self-confidence can develop social and academic skills.

Dolphin activist Ric O'Barry partly blames the International Whaling Commission for ignoring the suffering of dolphins and porpoises. They haven't stop Japan's fake "scientific research" whale killings in the Whale Sanctuary either! Even conservation organisations dismiss the dolphin and other wildlife massacres as unfortunate and cruel, but "sustainable"! Surely we could also dismiss human mass tragedies and natural disasters if we ignore individual suffering and just consider surviving numbers?

Japan's defence is the existence of our abattoirs. For the Japanese, the slaughter of dolphins is no more inhumane or inherently wicked than the slaughter of sheep or cows! At least livestock have the privilege of stunning and are not hacked to death in agony. However, our "management" of kangaroos would point out our hypocrisy even more!

According to Ric O'Barry, the dolphin meat is loaded with mercury. If the mercury poison doesn’t stop this horrific atrocity, let’s hope the shame brought by the film The Cove does!

While animal rights arguments against the hunt have fallen on deaf ears in Japan, the threat of mercury contamination perhaps will strikes a chord in a country where food safety is rapidly becoming a paramount public concern.

The Whale and Dolphin Conservation Society Australian website has information and action items. You can visit the site and click on "The Cove" button and view what is online:

Fortunately the sister-city program that Broome had with Taiji has been suspended until they stop the dolphin massacre. They have bowed to pressure to cut these ties. Why not promise that we in Australia will suspend, permanently, our massacre of kangaroos? About 4 million are "harvested" each year and another unknown number are killed with permits or unlawfully. Sometimes hypocrisy is forced onto us due to government policies.

Congratulations to Broome Shire Council for cutting ties with sister city of Taiji. After pressure by the Australian Public protesting against the city of Taiji in Japan's dolphin slaughter as seen in the movie The Cove. For those who are not aware, Warrnambool in South West Victoria is sister city with Miura in Japan. I believe it is a good time to send them a message to follow Broome Shire Council's lead. Warrnambool should cut ties with Miura over Japan's stance on Whaling. Feel free anyone to email Warrnambool City Council on [email protected] Their website is http://www.warrnambool.vic.gov.au/ Regards, Kirsa

Congratulations for the Oscar success of The Cove

Congratulations are due to the producers of the documentary, The Cove, for their skill and courage in making the film an Oscar success. Taiji is where fishermen may have hunted whales, dolphins and other cetaceans since 1606. However, so-called witches at this time use to be tortured to "prove" their innocence, and slavery was legal for centuries. Female circumcision is still practised as a cherished "tradition" in some countries today, and there are nations with the death penalty for political "crimes". Just because something has been done for centuries, or less, and even aligned as "culture", does not make it right, sustainable or ethical. Whales and dolphin are marine species, and are highly intelligent and social animals, and an integral part of their ecosystems. They are not part of our human terrestrial domain, and those participating in this violent industry have no inherent right to capture, main, torture and kill these sentient animals. Already the world's oceans are suffering from pollution and over-fishing. Economic gain is blinding the "fishermen" from seeing the real value of living dolphins and whales.