Tim Holding, Minister for Water and Tourism, didn't learn much from his brush with death recently! 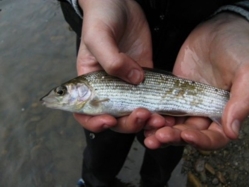 Tim Holding, Minister for Water and Tourism, didn't learn much from his brush with death recently, or about the forces of Nature.

Tim Holding fantasised about pizza in freezing wilderness when he got lost recently.

The Thomson River is already stressed under the impact of drought but this plan will go ahead despite Mr Holding conceding that the extra extraction did pose a risk to the health of the river.

Mr Holding acknowledges the extraction could harm the river's Grayling fish population. He is happy to rob more water from the environment by taking from the already flow-stressed Thomson River, risk the viability of endangered native fish stocks and Gippsland's Lakes.

These grayling are listed as threatened species already and listed under the Flora and Fauna Guarantee Act 1988.

The Thomson is a flow stressed river. Diversions for urban and irrigation use have
reduced flows by 50% (Victorian Stressed Rivers Program; CRC 1999) and sometimes
flows in the lower Thomson cease completely in summer (EPA, 2002).

Four of six reaches of the Thomson are rated by the Index of Stream Condition as poor or very poor.

Instead of robbing water from the environment, risking the loss of biodiversity, and the expensive and environmentally threatening desalination plant, we should be limiting our population growth.

The plan for a desalination plant at Williamsons Beach near Wonthaggi, together with water drawn from the Murray-Darling Basin via the Goulburn Valley pipeline, is intended to "drought-proof" Melbourne.

Thomson dam was finished in 1983 and, when full, stored more water for Melbourne than all of the other reservoirs combined. It was to "drought-proof" Melbourne. However, Melbourne's population has already exceeded the level its dams were intended to cater for. No extra catchment areas remain available to be plundered.

Almost one quarter of migrants coming to Australia settle in Melbourne. It is not about the country they originate from, but the fact that they are coming here to live. This is clearly irresponsible and risky and the only people who benefit are big businesses and land developers! The costs of unsustainability are being passed onto the public with soaring costs for water, power, rates and climate change.

Water Minister Tim Holding refused to rule out introducing stage 4 water restrictions as early as Christmas. This would mean no watering of gardens! Melbourne used to be the "Garden City"!

How many times are schemes to "drought-proof" for Melbourne to be revised? We are being dictated to by corporations that want increasing numbers of customers.

For health and safety reasons, if a venue is full then ticket sales should cease!

Surely, if Tim Holding admits that our river systems are stressed, and that our water supplies have been low due to 12 years of drought, we should stabilise our population!

Tim Holding may endanger his own well-being with his private escapades, but surely his risk-taking should not include the public, or our life-supporting ecosystems.

The Victorian Government will divert 12,000 megalitres of water that had been flowing to the state's northwest and send it down the controversial north south pipeline. This parcel includes the 12,000 megalitres traditionally supplied to the Wimmera Mallee region from the Goulburn Murray Irrigation District. The 12,000 magalitres was to boost Loddon, Goulburn and Murray River flows. Irrigators argue it should have been allocated to them, not set aside for Melbourne. Water allocations to irrigators had been set at zero for this season. The Brumby government is clearly stressed about Melbourne's water supply and is intent on stealing it from other drought-stressed areas' reserves to maintain our urban lifestyles and population growth. Supplying occupants for the building industry is more lucrative than agriculture now!

The myth of King Midas is ever more relevant each day in Australia and Melbourne particularly. I used to wonder how a ruler could be so fond of money that he would stupidly turn everything to gold, even water and food. Then Melbourne got Kennett, then Bracks, then Brumby and it really seems that, because of such values, Victorians may risk dying of thirst and hunger in the not too distant future. Sheila Newman, population sociologist home page

The costs of unsustainable population will be passed on!

The water allocated for environmental flows down the Thomson to the Gippsland Lakes will now be held back in the Thomson Dam, for Melbourne's use. Scientific reports show the fish could be wiped out from the Thomson under a worst-case scenario as a result of the extraction, but Mr Holding has expressed confidence it can be sustained with strategically managed releases of water down the river. Canberra has the power to halt the action if the impact on the fish is deemed severe enough. Many Gippsland locals felt their water was being stolen by a city that should have stricter restrictions. David Ellard from Friends of Gippsland Lakes says the reduced water flow will result in more algal blooms and will keep tourists away. Commercial fishermen in the Gippsland Lakes - into which the Thomson flows - were also unimpressed. Mr Holding said until major projects such as the desalination plant and the Sugarloaf pipeline came online, the government had no choice but to source water from other places. According to Holding: Melbourne households have reduced their water use by 12.3 billion litres since the Target 155 campaign was introduced in November last year and most people are doing the right thing. Why should households reduce their water usage to third-world standards while the number of consumers continues to be socially engineered for the advantage of businesses? The desalination plant should be operational from the end of 2011 and is expected to create about 1000 jobs. There is growing concern Melbourne's dams could run dry before the $3.5 billion Wonthaggi desalination plant begins pumping water in late 2011. Official figures show Melbourne had the greatest population growth of any capital city last financial year, adding nearly 75,000 in the last financial year. World leading reproduction expert Professor Roger Short, of the University of Melbourne, says Australia’s population growth is out of control. Nature is already under stress from human activities. The UN Millennium Ecosystem Assessment of 2005 concluded that two-thirds of ecosystems on which humans depend are currently being degraded or used unsustainably. Monash University demographer Dr Bob Birrell said the city's startling growth reflected record high migration. Our Brumby government is making commercial policies to favour businesses and land developers that are not in the long-term interests of the citizens of Victoria. The costs of water and climate change, and the all the implications of housing stress and infrastructure shortages of an unsustainable population size, will be passed onto the people of Victoria.