The Tarkine Wilderness under threat

Tasmania's Tarkine rainforests are important for their flora which has links to the ancient continent of Gondwana, and for their lichens and fossils which help tell the story of Australia's ancient flora and its evolution.
Mining companies like Venture Minerals are desperate to exploit the minerals beneath Tasmania's environmentally significant Tarkine area. Demand for metals being placed above the value of the environment.

The Tarkine region is located in the north-west of Tasmania. The area encompasses 447,000 hectares of wilderness including the Southern Hemispheres largest single tract of temperate rain forest, a wild coastline with an extraordinary wealth of Aboriginal Cultural Heritage sites. It's the habitat for over 50 threatened species. 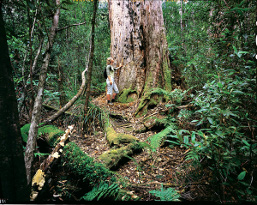 These rainforests are important for their flora which has links to the ancient continent of Gondwana, and for their lichens and fossils which help tell the story of Australia's ancient flora and its evolution.

The Tarkine is a  sensitive region rich in mega-diversity.  It's one of the world's last remaining temperate rain-forests, the home of the Tasmanian Devil and many other precious species.

National Heritage a must:

The Tarkine must be put on the National Heritage List.  The heritage assessment of The Tarkine will help ensure that the heritage values are considered in decision-making, so heritage protection is balanced with the social and economic aspirations of the Tasmanian community. Short-term economic benefits should not be at the expense of the un-quantifiable value of ancient woodlands, rugged coastlines, and forest habitat destruction.

Demand for metals being placed above the environment:

Chinese demand for base metals such as gold, iron, tin, zinc, lead, copper is at an all time high,  and this would mean logging, pollution, roads, and heavy traffic destroying the landscape and pristine rivers.

Environment Minister Tony Burke was called on to immediately include the Tarkine on the emergency National Heritage Listing amid concerns about the impact on the Tasmanian devil population of a revised tourist road project.   He denied that he made a promise to do so.  His predecessor, Peter Garrett, first gave the Tarkine wilderness a one-year emergency listing, which Mr Burke let expire.  Since then he has let a British mining company test drill in the area.

Mr Burke says the new plan for a tourist road is not the same as the original 132-kilometre loop road plan that was subject to a now lapsed emergency listing. One road is not similarly destructive an another?

Venture Mineral's Mt Lindsay tin, tungsten and iron mining proposal, coupled with the revival of the controversial Tarkine link road proposal, should have given Mr Burke grounds to reinstate Tarkine's emergency National Heritage listing.  Heritage listings would not stop mining, but developments would have to pass more rigorous and critical environmental tests.

The Mount Lindsay tin project is the largest of several mines planned around the Tarkine in an emerging new Tasmanian environmental battle. The Tarkine National Coalition said up to nine new open cut mines are in development there.  Venture Minerals predict $1 billion in revenue, with more than 500 jobs in construction and 200 in operation.

Surely the threats of mining are enough reasons for an emergency heritage listing for the Tarkine?

Mr Jordan who heads the Tarkine National Coalition says Mr Burke's decision to lift the heritage listing means other mining companies will not be scrutinised as closely as Beacon Hill Resources.  The whole area should be protected as a national park.

The interests of miners are being placed above the Minister's obligations to the environment. All three proposed mining projects will have secured Commonwealth environmental permits during the 18 month period he had at his disposal, allowing them to avoid scrutiny against National Heritage criteria. They will also be allowed to continue exploration drilling and associated access roading without need for Commonwealth assessments.

The mining will cause havoc to the pristine condition of the area. There is nothing "sustainable" now. It's just window-dressing. What about the costs and long term damage of these industries and jobs? Mr Burke is supposed to represent the environment, not the mining industries. As with his population strategy, that come to nothing, he is now abrogating his duty to protect one of the last temperate rain-forest areas in the world.

It is wrong to destroy sacred and holy places to plunder their riches, and the same applies to Nature's sacred places.

Getup - Save the Tarkine

Make a call to protect the Pilliga from coal seam gas

Another urgency: Water quality test results show gas company Santos is dumping toxic water into Bohena creek in the Pilliga forest, threatening aquatic life with raised levels of ammonia and methane. According to the Wilderness Society, Santos must stop discharging water immediately until there is a full scale investigation and water can be shown to be safe. Currently, there are 92 coal seam gas wells in the Pilliga, but Santos have plans for 1100 gas wells, increasing the volume of water being discharged by more than 10 times. It’s up to us to tell Minister Burke: We don’t want the unique Pilliga Forest and downstream rivers polluted by coal seam gas mining! He should be taking action to protect our natural assets. Please take one minute to call and leave a message for Minister Burke. Tel: (02) 6277 7640 Email: Tony.Burke.MP AT aph.gov.au The constant demand on our environment for economic growth will mean loosening of our environmental protection regulations. We must stop the greed, and head towards a sustainable "steady state" economic model.