The logging of old growth forest at Brown Mountain has been precipitate and swift. Few Victorians would be aware of the destruction which has occurred over the past few weeks in forest wild life habitat.

Anti logging activists/environmentalists are scrambling to document the presence of an endangered crustacean in the local river and endangered glider population in an area which is now being denuded. For the logging company and the government it is best for the public to find this out in hindsight, or it is likely that clear felling would have to be reconsidered.

Activists are hoisted high in the trees

See red ring. Do you know anyone with this kind of guts and committment? Don't you think they deserve more support than the government? (Ed.)

"Activists are hoisted high in the trees," writes Jill Redwood, as she reports hastily from East Gippsland, six hours from Melbourne, where she literally has only hours to work to slow or halt further destruction of this area.

Loads of news to report - Brown Mountain (on Australia Day)

Sue Pennicuik (Greens MLC Victoria) drove up to Brown Mt to witness the destruction and breaches of the law which have been occurring. She spoke with contractors (in Stony Creek) and with protesters. 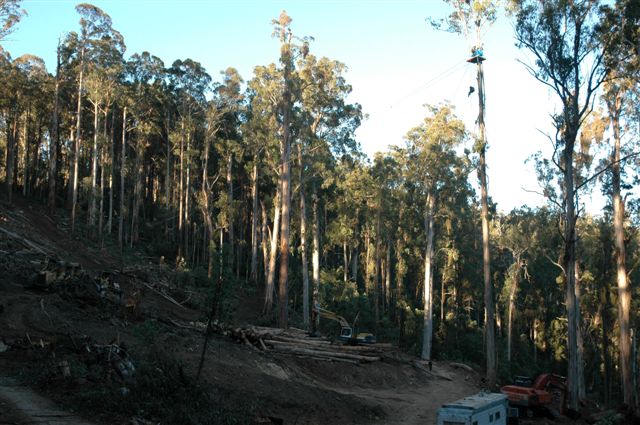 Endangered crayfish has been sighted

Endangered Orbost Spiny Cray (Euastacus diversus) has been discovered in Brown Mt. Creek. With this one, it's a race against time to have it recognised by the government before its habitat is logged. Department of Sustainability and Environment (DSE) seem more worried about whether the people who discovered it had a permit rather than if the crayfish warrants protection from bulldozers near its creek.

High populations of arboreal (tree living) mammals have also been discovered in Brown Mt this weekend by researchers. They are there in densities which should trigger protection for the area under the Forest Management Plan prescriptions, of immediate halt to logging plans while the rich wildlife site is verified by DSE.

Greater Gliders, Yellow-bellied Gliders, and Potoroos have also been found across the track). 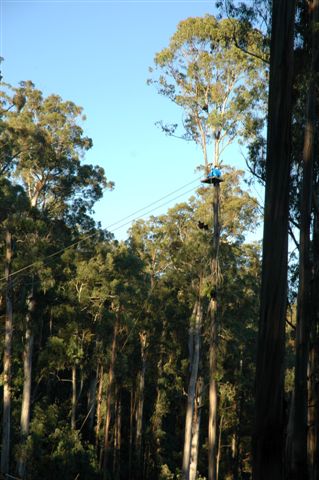 Many breaches constantly being discovered, according to this report:

1. bulldozing of mixed rainforest along Brown Mountain Creek in readiness to start clearfelling the adjoining stand of ancient forest.

2. contractor/logger being investigated for theft of burls.

3. Huge old tree has been felled outside the coupe boundary - illegal logging.

4. VicForests has prohibited access through the tourist road into the park for the past 3 months of holidays - with no alternative route offered. Only two days ago, after weeks of complaint, have they made a change that allows tourists into the National Park! Comment: Who owns these areas!?

5. Logging has continued against occupational health and safety regulations when members of the public are present. Worksafe is believed to be investigating.

This is how the Brumby Government treats our National Heritage of ancient forests and threatened species - on Australia Day!

Members of the public can be and are charged for entering these areas to expose the illegal goings on - but no one is checking on the loggers or VicForests!

Bulldozer boundary track has been put around the adjoining stand of old growth in prep for the start of clearfelling this week! 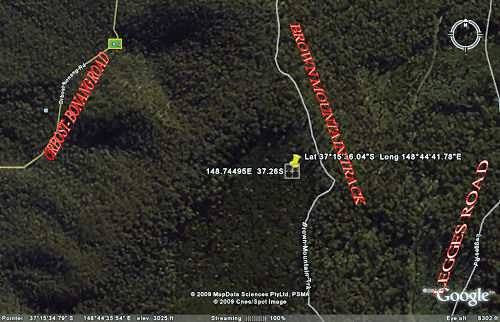 It's one minute to midnight. Please help in whatever way you can -

* get up here to help stall the logging -
* call the Premier's office (bypass Jennings) 9651 5000 and get outraged by any of the above ...
* pass this email around to friends or any journalists you know.
* find a VIP/sports celeb etc who might like to help up the profile of this issue (cottage accommodation if they want to visit)
* there could be a new group of older women (seniors) about to start getting active. Do you know others who could join in?
* call talkback radio and speak your heart
* write short pithy letters to newspapers (dailys or metro - eastern burbs useful).
* handwrite (most influential), type or email a letter to Brumby demanding an immediate halt to such a rich area. Write to the Treasurer John Lenders (c/- Parliament House Spring St Melb) demanding VicForests be pulled into line - for economic and on the ground accountability.

Scroll down to bottom of article "Brown Mountain Rape" and you will find a google map with the roads and coordinates marked. If you have GIS you can get there. It's a worthy battle; go with the Ents. Frodo would approve.

Using Google Maps directly, instead of just an image