The following article was adapted from a #comment-679127">post made on 1 Apr 09 to the Larvatus Prodeo discussion "More on the Yellow Peril". 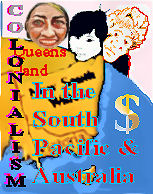 Concern grows in Australia as Chinese government-owned businesses mount an ambitious program to buy strategic Australian companies. This program includes the bid by Chinalco to buy a major stake in the mining company Rio Tinto and the bid by MinMetals to buy out OZ Metals. Adding to this concern have been recent news reports of Defence Minister Joel Fitzgibbon's undeclared free trips to China from a Chinese businesswoman friend, Helen Liu; a secret meeting between Prime Minister Kevin Rudd and the Chinese propaganda minister; and the ongoing efforts of communications Minister Stephen Conroy to impose a Chinese-style firewall on Australia's Internet users.

As in the past, the bogey of racism has been employed in an attempt to prevent discussion of these issues.

Whether or not 'racism' motivates objections to growing Chinese influence, the fact remains that, if at some point these acquisitions and other Chinese penetration of the Australian economy are not stopped, Australians will find that they no longer control their own destiny in any sense .

Consider the story, "Bowen a sure thing for Chalco", of 26 Jun 08 in the Townsville Bulletin, which is highly sympathetic towards plans by the Chinese state-owned company Chalco to build a massive Aluminum refinery in the wetlands to the north of Bowen. It made the claim that "the Bowen community was largely supportive of Chalco". It went on to reveal that,

"... schools discussed the possibility of introducing the Chinese language into their curricula to expand job opportunities for students."

If the necessity of learning a foreign language in order to be able to secure employment in your own town is not a symptom of colonisation, then what is?

This aluminium project has been opposed by local environmentalists because it would practically guarantee the destruction of the wetlands to the north of Bowen, just as the Gladstone Aluminium refinery has already ruined the coastal waters around Gladstone. (See "Impacts of the Chalco Aluminium Refinery if located near Bowen", "Burdekin Greens candidate: break neck industrialisation threatens Bowen region environment"). And even if it were somehow possible to operate the planned Bowen aluminium smelter without poisoning its environment, its operation would still greatly increase the already grave problem of global warming.

To let Chinese companies build and operate whatever factories they choose in this country, wherever they like, and to let them buy-out our resources sector, is a short-term political route of least resistance.

Our mining executives, having allowed their companies to become insolvent by gambling that the demand for our mineral resources, particularly from China, would continue to grow indefinitely, now need Chinese investment to make themselves solvent again.

But ordinary Australians sensibly resist handing across control of our mineral wealth to the board rooms of Hong Kong and Shanghai.

Our governments must do whatever it takes to prevent this. If necessary, the funds to buy back our mineral wealth should be raised from the Australian people. A good start would be to cancel Prime Minister Kevin Rudd's idiotic scheme to distribute pocket money to Australians in the hope that the money will be somehow spent in a way that would stimulate Australia's chronically dependent and backward economy enough to avoid a depression. That money would be far better spent on buying back the farm.

Although Australia's political leaders today don't have the stomach for this, the political leaders of our forefathers who fought in the jungles of South East Asia in the 1940's to defend our freedom almost certainly would.

Update: 75% of respondents to a Courier Mail online poll believed that Australia was too reliant economically on China, 2 Apr 09. Note: although on page 35 (2nd of 2 letters' pages) of the printed version of the Courier Mail tells its reader to "cast your vote at couriermail.com.au", I couldn't find it. Can anyone tell me how to find it? - JS