Yet another media beat-up over sick leave entitlements 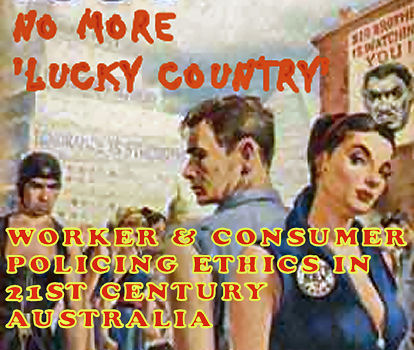 “It will be those people, who can keep alive, and cultivate into a fuller perfection, the art of life itself and do not sell themselves for the means of life, who will be able to enjoy the abundance when it comes … We shall once more value ends above means and prefer the good to the useful. We shall honour those who can teach us how to pluck the hour and the day virtuously and well, the delightful people who are capable of taking direct enjoyment in things, the lilies of the field who toil not, neither do they spin."

So wrote the economist, Keynes, J.M., in “Economic possibilities for our grandchildren” in The Collected Writings of John Maynard Keynes, Vol.9: Essays in Persuasion, London, MacMillan, 1972 [1931]

Then along came the Second World War with its fuel and weapons creation frenzy. It wasn't until the 1960s that people again began to talk hopefully about the great promise of leisure. To combat this trend of thought, the media published many articles about the competition posed by Japan's workers, who were described as incredibly hardworking, disciplined and efficient. By the 1990s working hours, particularly in Anglophone industrial societies, began to rise again and there was no longer any official promotion of leisure.[1]

Now the official message is to work harder to produce more and then to go out and shop to consume more.

In tune with our increasingly humourless and stern paternalistic society, we are cyclically subjected to these media beat-ups about how we are all taking too many sickies, as though we were so many bad children, and the folk in our media, industry and government were wiser and worthier elders - even the 'young turks'. Today it is Australia Talks' turn to get out the whips. As usual we lesser mortals are subjected to the opinions of people deemed 'experts', although if we are quick we might be able to get a short comment in on air.

Will Australia Talks challenge the 'experts' with the real scandal, that Australians are now working more hours for less money, and the promise of a generation ago, that we were going to have much more leisure, has been withdrawn. It has been replaced with panels of authoritarian experts telling us why we must work harder. Will the panel even look at the unpaid work we are forced to do in order to fill out more and more forms or the difficulty many people experience in fulfilling social obligations which are now deemed much less important than activities which make money?

The promotion of the program entitled "Sick Leave" states:

The great Australian tradition of a sickie - or doonah day - is alive and well. Despite the downturn - or maybe because of it - sick leave is on the rise. Why are Australians taking so many sickies and how are we spending them?

The line-up of guests appears one-sided. They are:

At least if George McEnroe is, indeed, the comedian that he or she is claimed to be, one can expect of him or her to effortlessly show up the sanctimonious hypocrisy of those who would judge workers for have taken sick days for reasons other than sickness.

I responded early in the Australia Talks guest book:

The real scandal, is why, when we were promised over a generation ago, vastly shorter working weeks and longer holidays as result of improved technology, the exact reverse has occurred for the vast majority of the Australian workforce, whether overtly through award conditions, through subtle blackmail or through economic necessity.

Those who have guided the destiny of our country in this period have brought about a situation where a lot more needs to be accomplished in our own time than what used to be the case. So, for many, time off work for reasons other than sickness has become a necessity.

As so many more are working in dreary low-paid occupations for which we are overqualified, days off work are often necessary to save our sanity.

In my opinion, those who periodically beat up the question of supposed abuse of sick leave are amongst the lowest of hypocrites in our society.

If you also want to help pre-empt a new witch hunt against workers deemed to have taken too many days off sick, please make your views known on the Australia Talks guest book, or phone them tonight after the 6PM news (5PM news in Queensland) on 1300 22 55 76, or add your comments below on the candobetter site.

This article was written by James Sinnamon with Sheila Newman

Sick of the media propaganda

I'm sick of their bloody propaganda to work, work work! I want to buy land to provide for myself and my family and go and have some kind of life before I die, but I can't even afford a mortgage. I'm 55 and I don't call this progress.

Sick-leave Australia talks lightweight but could be worse

A few interesting calls in to the program, including one from a Belgian currently working in West Australia. He pointed out that in Europe, workers have 7 or 8 weeks annual leave and are paid up to 80% of their wages for as long as they are ill with a medical certificate - with no limit. Others rang in and reminded people of the problem that you cannot take your sick leave with you when you change jobs - with rare exceptions. This is the reason that a lot of people stay in jobs. (I was reminded of Michael Moore's film about the U.S. hospital and medical insurance system, Sicko, where workers with health problems are chained to their jobs by their employee sick-leave plans, fearing that they will be uninsurable if they go to another job.) Another reason raised, was that the amount of sick leave often depended on the relationship people had with their direct manager, which certainly rings true. If you feel that your manager doesn't even know or care who you are, then why should you care about the impact of taking a day off might have on the workplace. Nothing fundamental was raised, however, such as the fact that employees are locked into the wage-system by the rising price of land. In the first place, high land costs are a big obstacle to becoming partly or fully self-sufficient, as in growing your own food. Secondly, starting a business requires you to pay land costs or rental before you even hire people or manufacture a product, leaving very little margin, if any for profit. Thirdly, the cost of mortgages makes it necessary for people to get high incomes one way or another, and the banks keep raising the bar, so the pursuit of 'wealth' is endless wage-slavery or round the clock work in your own business. PAYE tax was not touched on. PAYE tax came out in the early 1940s and has never gone away. Most of us accept it without thinking. An indication of this is the lack of blogs on the subject. Why is it important. Well, governments have gradually become dependent on a large swathe of employees continually forking out one third or more of their earnings so that the governments can pass these on to their friends in big business, who are insatiable, as we have learned from the global financial crash and beyond if we had not already worked it out. The theory was that we paid taxes to get things done for the community, but now we are told that we must pay charges for all the things that taxes once paid for - water, roads, justice - etc. The dependence on PAYE tax locks societies into keeping a lot of people in the wage-earning force, with few alternatives. This is one of the big reasons that increased leisure is always put off for some time into the future. This is the reason that our societies are not allowed to slow down by governments, who require the turnover from endless growth just in order to pay the interest on the debts they have accumulated in various grandiose schemes they have subsidised their corporate friends in. So, these are some of the reasons why most people in society are treated like little children who must ask a doctor politely for a certificate for a day off if they are sick and who must toil in environmentally and socially damaging jobs in a growth economy instead of contributing as adults to the real, not-for-profit community. Sheila Newman, population sociologisthome page

A few decades ago journalists and social commentators in Australia used to write and talk about the challenge of the future being how we would spend our copious leisure because working hours and the working week would be shorter in the future. They said it was expected that a 3 or 4 day week may be the norm. They were not talking about under employment, but a society where this amount of work was sufficient to support a reasonable standard of living -a standard of living equal to the prevailing one. The reason this was expected was with improvements in technology which would deliver us this almost nirvana. How differently things have worked out. Of course people are now working longer hours than they did a few decades ago! Now 2 people have to work to pay off a mortgage on a house which is not as good - (may be bigger)- but not as good in terms of all that matters - its position, amenity and proximity to services compared with that available to their parents' generation. This did not have to happen. There must be a very clear unequivocal way of measuring material well being without confusing the measurement with inter generational comparisons of home electronics technology (TV , Hi fi computers etc) I think the measure would have to be associated with the hours worked to pay off or secure the family home

The cost of land drives the cost of every other thing up. We have to get rid of the land mafia. It is because of them that we work so hard, produce too much, consume too much, are too many, and are facing ecological peril. Sheila Newman, population sociologisthome page Copyright to the author. Please contact sheila [AT] candobetter org or the editor if you wish to make substantial reproduction or republish.

"Social housing" is the new solution to a housing shortage.

Land developers, builders, the finance industry and our State governments are all part of the great growth lobby - to increase our population by using land and housing as a source of profits. Housing should be a basic right, and we used to be a land of high home-owners. Now, with our massive immigration numbers, the demand is outstripping supply. The prices have been globalised and are way above what they should be, and Australian families are losing out while big businesses are amassing wealth. "Social housing" is what is being pushed for now - high density living not for new arrivals like the Housing commission in the 1960s, but to cope with Australians who can't afford a house with a back yard.